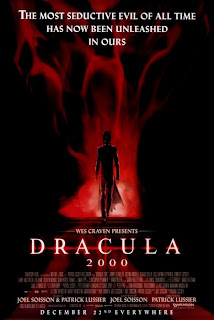 Well it took me ten years but I finally got around to seeing it: Dracula 2000. Go ahead, say that title out loud without either laughing or groaning while holding your head in shame. If there’s any particular reason I can think of as to why I never picked up the DVD case to so much as even look at the back cover, it’d have to be that. Or perhaps it was those three sweet words above the title “Wes Craven Presents” that screamed out (no pun) to me “I gotta fuckin’ watch this movie!” It’s actually quite difficult to think of a movie with 2000 in the title that doesn’t completely suck. Some of them are so bad that they put the year in the title just to warn us, an awfully nice gesture if you ask me. But what did I think of Dracula 2000 you ask? Well it’s definitely not that bad. Don’t get me wrong, I use bad in a relative term… the movie of course sucks (no pun), but totally makes up for that in how badly good it actually is.

A quick pre-Queen of the Damned vampire appreciation of Heavy Metal is always smirk inducing. How about a modern day Mary and Lucy working at… Virgin Records? Or how’s this grab ya: Jeri Ryan, Jennifer Esposito and f’n Vitamin C as the Three Brides of Dracula? You can’t tell me that big D isn’t on top of his shit, even in his old age. Personally, if it were up to me though, I’d kick Mincy out of the group and bring in Monica Bellucci. That’s just a matter of taste though, really. Danny Masterson (all hail) plays the thug with the love for the camera mug Nightshade (which is probably the third or fourth gayest pimp name I’ve ever heard – Snowball and his hoes The Snowflakes from Lamberto Bava’s Demoni, topping the list) and he’s just delightfully fun to watch. Omar Epps gets a surprisingly awesome looking fang transformation that shocked me, as it looked that damn good, putting to shame many others I have seen (True Blood for example). And Jonny Lee Miller, does this guy ever not kick ass? Maybe I’ve seen Hackers a few too many times, but this guy can make even the corniest films seem badass simply by his mere presence. 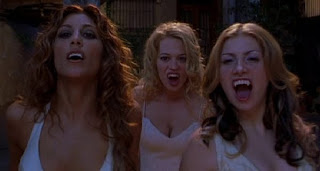 But what’s this… what in the hell?! Gerard Butler as Dracula? What a strange notion. Next thing you know he’ll be playing The Phantom of the Opera, or The Wolfman… or hell, even Attila The Hun or Judas Iscariot. You know what, I wish that he had done the new version of The Wolfman. Fuck it, you know, I guess he can play the Wolfman in the Monster Squad remake coming up. Anne Rice was pretty pissed off when she heard that Tom Cruise and Brad Pitt would be portraying her beloved vamps in the Interview film, but I mean, look what happened there. They both aced that shit like no other pretty boys could have done. Gerard Butler though, I’m not sure just what to make of his performance. It wasn’t horrible that it took me out of the film or anything like that, oh no, it’s really just a bit bewildering. I’m so used to seeing the guy ham it up, and he was playing all dark and weird eyed here. Christopher Plummer (whose long career has seen him in other Jesus and Dracula pictures) plays Van Helsing’s “descendent” and gets to provide the story with some interesting developments, thanks to the weird ass script. Justine Waddell did a fine job as Mary, though sadly, I’m not as in lust with her as Dracula. Something between her and my brain didn’t click, but I’ll try not to dwell on it.

Despite being a new and hip take on the Dracula mythos, I think the story was pretty well done. Nothing was over explained, the mix of clouded lore and contemporary life was balanced, the twists as well as the tributes were welcome and not too half-baked, and there was some funky dialogue to keep those eyes rolling. The grossness and gore shots were great additions which the film really needed. The leech jumping off of Drac’s corpse onto Shade’s eyelid was creepy and hilarious at the same time, so cheers on that one. The editing was a bit insane in places, but I guess if Patrick Lussier is going to go all out and potentially harm a film that way, it might as well be his own. If you recognize that name but don’t know why exactly, don’t worry… any horror fan has seen it plenty of times without probably even noticing. And while Patrick’s directorial resume isn’t all that with a bag of crisps just yet, who really knows what the 3-D future holds. Especially if he keeps casting the hottest chicas imaginable, as he did here, I know I’ll be watching. 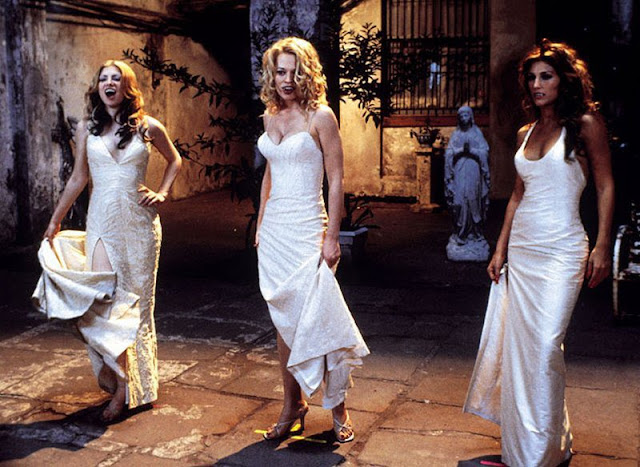 So yeah, I guess you can color me blush red, surprised. Whoever happens to read this however, probably is not surprised in the least that I enjoyed another shitty movie. I don’t want to say that I’ve eased up over the last ten years, but if I had seen this when it first came out I probably would have crucified it (no pun). With all of the pop-culture-ish actors in the film (did I mention Nathan Fillion as an honest priest?) it’s actually probably better that I waited this long to see it. And perhaps it’s about time you yourself revisit it, maybe you’ll think again about what you thought before. It might just suck ass a little less this time around.

Down 2 shots of Vodka every time Virgin Group is mentioned or their logo is seen.

So what you're saying is you've got to be drunk to enjoy this picture?

I saw this at the theaters on Christmas day when it came out. I have not bothered to see it since, however since you mentioned all the people who are in it, I kind of want to see it again.

Have you seen the 2 sequels Dracula 2: Ascension & Dracula 3: Legacy?

It helps, hahaha, but yea, Richard Branson had to fund this picture, this mega-corporation is referred to repeatedly in the movie.

As for the sequels, I really have no desire to see them. But who knows.

Good review! Will have to watch this again.