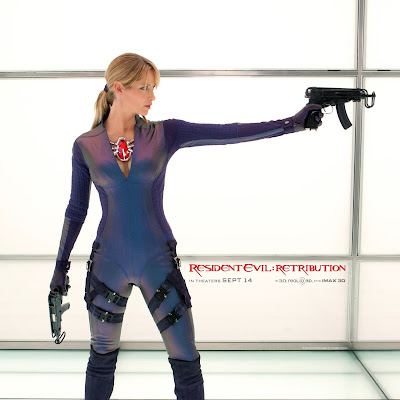 RE: Retribution starts off with an explosive action scene that occurs just after the post-credit sequence from the last film... only it's played backwards, in super slow motion, and in 3-D while the credits appear on screen. Not only does this intro look downright incredible, but it's also pretty damn sweet and left me with a big stupid grin on my face. Unfortunately, from there it goes into some pop-up "split screen" type narrative introduction from Alice recapping the events from the entire series. After learning about the previous four films wasting the audience's time for about a minute or two, we get to see that reversed scene now in its original fast paced form. It goes by pretty quick on the second time around, but it's cool to see it all play out after you've seen it so slowly deconstructed.

The look of Retribution is a wondrous vision to behold, much like its predecessor Afterlife. And herein lies the film's main strength. It is beautiful! So much of this movie, from the very first frames to the final shot are composed extremely well, shot magnificently and are very visually interesting - captivating, even. The mix of the elegant set designs of the Umbrella Corporation building and the holographic "Levels" throughout the story (and not to mention all the weird shit that goes on) give the whole film a really psychedelic vibe which I totally dig. Half way through, the thought of dropping a few tabs before I came to see this seemed both a dangerous and delightful idea. The majority of this film was obviously storyboarded with utmost importance and followed through with a passion.

Unfortunately (hey there's that word again), the film goes into quite a few lengthy shootout scenes where nearly nobody of importance is ever hit. Only faceless drones get shot to shit, over and over, while cutting repeatedly back and forth to our main characters popping off a few... and it gets boring. Those are the only boring moments of the film thankfully. And at least during one of these dreadfully overlong and choppily edited scenes, Barry Burton (Kevin Durand) gets a major scene that was just good enough to make his very underused character memorable. I wish I could say the same about Leon S. Kennedy (Johann Urb), who's only shining moment in this whole film is putting his hand on Ada's thigh on the helicopter ride home and getting rejected. What the fuck is that? 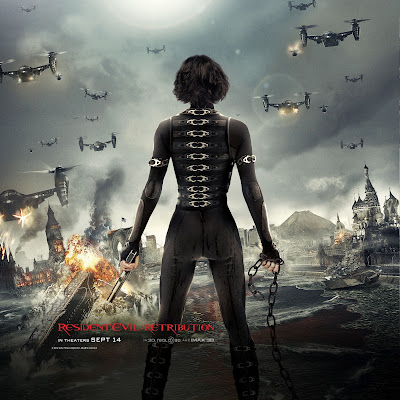 That Ada Wong (Bingbing li) is one sexy ass bitch too I'll tell you that much. Her character, from the personality to the dialogue to the clothing and the poses, are so dead on; and Bingbing is so remarkably beautiful that there's no doubt this character will be welcomed by fans of the game. Ada is one of the big three characters here in the film, the other two being Alice (Milla Jovovich) of course, and Jill Valentine (Sienna Guillory). Jill Valentine, with her dyed blonde hair, skin-tight blue outfit and spider-like mind control device just above her luscious boobs (her outfit from the RE:5 Game) has always been one of my favorite designs (so hot!) and Sienna just works it and provides maximum fan service. Her robotic like dialogue and near T-X like stature adds that much more un-guilty pleasure to it all.

Alice is naturally the star of the show, and if you're in lust with Milla like I am, then you sure are in for a treat with this sequel. I love the long and lingering close-ups she's constantly getting, and when the camera smothers (or dry-humps) her. Nearly every shot of her is very voyeuristic and had my eyes glued to the screen... not to mention other things glued elsewhere. And of course, who doesn't like to see her kicking some serious ass!? After experiencing the outbreak in Japan and fleeing into an Umbrella hallway, she has a long "Oldboy-esque" battle against a shitload of zombies (including Patient Zero aka J-Pop Girl (Mika Nakashima) and another zombie hottie) much of it in slow motion with 3-D splattering brain effects to the maximum. It's all very palm-sweat inducing, somewhat laughable, really fun and just totally nuts.

Alice and Ada also get a two on two against a pair of Axemen (Executioners) while on a walkthrough in New York City. There's a ton of chaos here with buses getting chopped to pieces, cars flying, gratuitous near deaths while dodging vicious blows and tons of head-shots that do absolutely nothing to these fuckers! While the shortest of the four main battles in the film, it's always exciting to see these huge monsters swinging those axes and getting thrashed by two hot chicks. I do however prefer the Axeman battle from Afterlife to this one (There's just something about seeing Ali Larter and Milla gettin' all wet and in slow-mo!). A massive Licker shows up a short while after this proceeds to relentlessly terrorize every single protagonist here, doing a fuckload of damage and bloodying things up. These things freak even me out, and if you ever play the games and encounter them, they'll freak you out too.

Retribution feels more like a video game than any of the previous films, and I really like that. A lot of the dialogue is pretty bad and video game-like (mostly Jill Valentine for instance, as well as a lot of puns) but it adds to the charm of it all. And of course the ending just has to feature a long and sultry battle between Alice and Jill, both of them looking seriously hot in their skin tight outfits. That's just the way it is with a movie like this, and always justifies my laying down the cash to see this on the big screen in 3-D (kinda like Underworld). One sour point for me was Albert Wesker (Shawn Roberts, hamming it up to the eleventh degree) in this one. Though, I wasn't totally convinced by his 'from game to screen' character in Afterlife, his 360 here (albeit done with personal gain heavily looming - think when Megatron joins forces with Optimus Prime for five minutes) is a bit unnearving and it's just plain weird to see himself, Alice, Jill, Leon and Ada all standing together. Very weird. 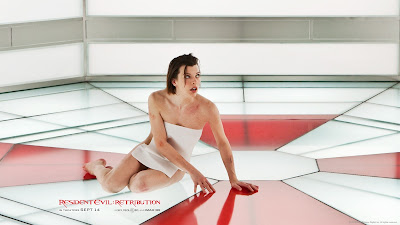 So should you go and see Resident Evil: Retribution? Let's examine the following two questions: Do you enjoy seeing Milla Jovovich almost completely naked? Or does seeing Milla Jovovich almost completely naked drive you insane and fill your heart with disgust? It's as simple as that. Almost isn't good enough, I know... but I say go see it. If you've seen all the previous films, and even if you "don't like them", you owe it to yourself to see this from a completest's point anyhow. Characters will be bastardized, these are always the facts, and fans of Leon will no doubt be disgusted by his representation in this film. Fans of Ada, Jill and even to a smaller degree, Barry, will leave extremely happy. Wesker fans, I'm not so sure either way. But if you've loved the character of Project: Alice from her conception, then you'll of course crave more!


Oh yeah, and Michelle Rodriguez was in this too.