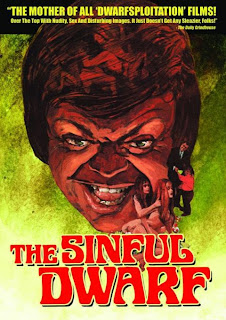 Whimsical music flows freely as a 29 year old little girl, dressed in white and with pigtails, chalks up the sidewalk for the single most boring solo game of hopscotch. As she skips along, enter our small hero with sinister grin, limping pimp walk and… stuffed animals(!). He sets down a fluffy toy dog and its electronic mechanism goes berserk with cute barking noises. The girl is intrigued, pets the creepy little thing (the dog) then follows him home with said cuteness in hand. She seems bewildered, unspeaking, as he leads her upstairs. Constantly kneeling down and giggling with joyous excitement, she is fiercely knocked across the back of the head with his walking cane! He shudders with delight, sweat pouring from his brow, and turns off the barking. Cue the littlest clown beating drums, and cue the title card: The Sinful Dwarf!

Dancing, gyrating, walking, dry-humping figurines, and one train, accompany the credits while mad beat-off music causes panic attacks. Poor defenseless teddy bear, looking sad… switchblade action, and a stab to the doll causes a squeak as it is then gutted violently! The scream of a nubile, young, underfed woman with dark circles under her eyes erupts, and scares the crap out of you. Other girls, like her, are scattered across the room… all of them naked, in a drugged up, rape induced daze. Nice! Just then, Johnny and Betty approach the front door, and Mistress Scarface answers. “I’m strapped for cash and my bitch is preggers” he says… “We need that room you’ve listed!”

“Spanky!” shouts the woman, “Take these two upstairs as once.” “Right away…” our tiny hero says with a grim misfortunate tone. And he does so take them upstairs as they follow slowly behind: Cane, Stomp, Stomp … Cane, Stomp, Stomp … Cane, Stomp, Stomp …he does it so brilliantly. Entering their new ‘apartment’, the little rascal bounces ass first upon the bed announcing, “Look! It’s bouncy and stuff!” with a somewhat disturbing grin that he seems to always have. He twirls his cane around, twitches, rolls a quarter through his fingers and disappears into the night’s delights. As our British sperm loaner reassures his blond mistress that everything is going to be “just peachy”, Spunky’s mum asks how the new tenants like their room. See, she wants them to be comfortable and make sure that the blood curdling screams don’t disturb them. She also seems to take a fondness to the young blond preggy girl, as if she thinks they can “use her” for something. Hmm, I wonder what…

Cue blood curdling screams! That was fast. “Not not too much for any one of them, and only the one’s who really need it…” She says, “And no Fooling Around with them!” Shorty makes his way upstairs, but stops for a bit for a quick peepshow moment as the man and his lady poke the baby, thus making it future gay. He may as well be shooting rainbow jizz, but I guess that’s why they’re born with it. Hot chick moaning “please, please!”… Cane, Stomp, Stomp… the anticipation is too much for me now. He pulls out a black velvet bag… and a fat, bent, dirty ass needle full of juice. Ugh!

Hot little Sally is now going to go roaming around the house since her hubby is off in finding-a-job-land. She’s been hearing weird noises, and really there’s nothing better to do except grab some chips and hit the pub, but she’s watching her weight, so yeah, time to snoop around. And snoop around she does, while in an extremely tight fit, seemingly see-through white sweater, with no bra. Unfortunately for poor Sally, she’s not going to like what she finds in that cobweb polluted attic… hearing the pitter patter of Cane, Stomp, Stomp however, she quickly scurries off.

Spanky leads in a nameless faceless ‘John’ and opens the hidden doorway, “You know what to do, just ring the bell when you are finished.” That’s service with a smile, baby… a creepy ass, fiendish, totally demented smile, but a smile nonetheless. I’m sure this dude would prefer some of the chicks that he’s paying top dollar to bone to be smiling, but it doesn’t look like that’s going to happen any time soon. Meanwhile, Betty makes tunafish topped salad greens for her and her husband, and she tells him all about her strange day of exploration. Downstairs, Mum and her even older looking gal pal down Beefeater Vodka and talk for about three years… then break into song and dance, complete with Chiquita Banana fruit hat and Spunkster on the eighty-eights.

We’re treated to the above scenes in various forms over and over and over (this is basically the whole middle of the movie bookended by two ten minute intro and outro segments), which becomes rather tedious. So let’s skip the details and get down to basics:

1) Little dude and his drunk-arse mum are kidnapping (is that even the term for how stupid the chicks are in this one? ‘Luring’ maybe?), luring really somewhat hot 36 16 year old chicks back to their place, whereby they drug them with heroin and force them into prostitution. Lots of really unflattering sex occurs and it’s pretty gross.

2) Mum and the other gray haired old chick get f’n blasted all day long off tha V and reminisce… which causes ol’ Mum to jump up, grab a costume and begin to sing. It’s horrible! When her friend isn’t around, she’s constantly talking with her son about how they “can use” the blond chick and should get rid of the more addicted girls upstairs since they’re using too much of the shit.

3) Pretty boy’s wife just cannot stop snooping around the damn house while her husband it out not getting a job. And as you can obviously guess, she’s going to just end up getting caught, tortured, stripped down, fed heroin, and put on the chode smoking train before you know it! Yeah, that and out little friend is going to show her that his pimp cane is for more than walking… if you know what I mean.

So what’s with all the stuffed animals being carried around? Oh right, those are from “Santa’s Workshop”, where their white bearded, red shirt wearing drug dealer has a toyshop for a front. It’s really quite all absurd, especially when one of their runners is shot by the cops and they need a new guy… and hey, look who’s out a job huntin’. How does it all tie together, and how will it all end!? I’ll tell you how it all ends:

In a moment of complete randomness that defies any form of logic whatsoever! I was left dumbfounded, shocked, wide-eyed, and shaking my head to and fro. After all the strange shit that went down and after seeing so many things that I wish I never had (aside from the wife who was a total honey), I never in a hundred years would have thought The Sinful Dwarf would do what he did in those final moments. Maybe I just wasn’t expecting it or not ready. It’s perfectly understandable I guess when you think about it later on, but when that shit just happens so suddenly… it’s just nuts.

So how is The Sinful Dwarf viewing experience you ask? It’s pretty downright horrendous for the most part. I mean, those scenes with Mum singing all dolled up just make me want to take a Q-Tip to the base and snuff out my hearing ala NoES 6. Mum and her old friend are just not that interesting, and their boozing scenes drag forever. One could possibly try to forgive that if the sex scenes between the guys and dolls were somewhat hot, but dude, they are not! (There’s a XXX Version out there for those who are interested – I got this before they announced it, and after seeing this one, I’m totally not gonna.) The bad acting all around is tolerable, but I’m not usually affected by bad acting so that’s that…

The soundtrack is pretty badass for an insane collage mix of clattering and clinking toy sounds mixed to beats and onscreen events. It’s like what an asylum would sound like if the patients would just all make noises with various tools… instead of simply screaming “Get them off me!” all day long. At the same time, it’s rather maddening and could quite easily drive you into a frenzy. The mix of this most unconventional background noise and the dirtiness of the film give you the most utterly fucked up atmosphere imaginable. Yeah, and this film is dirty. It just looks gross: The clothes (aside from that nipple inducing sweater), the no clothes, the walls of the apartment and all the backdrops, the furniture, the hair, the lighting and design… add on top of it that the print itself isn’t too clear and looks rather muddy, but I bet it looked just as good when they first shot it.

The plot is razor thin, and it seems to be about twenty minutes too long. Perhaps as a one hour film I would have deemed it brilliant… and maybe even a party film. But as it stands, the only party this should be shown at is one with roughly forty people, all high on shit ranging from Alcohol to LSD and not actually sitting to watch the film… simply kept on as background while music plays in the other rooms. Independent parties, such as the one I had with this film, and the amount of lube usage, may vary. On a strictly personal note, the only lube I used in the viewing of this film was my favorite brain lube: El Capitan Morgan 100 Proof Spiced Rum. I fuckin’ needed it too.

I love the fact that this was finally released and that a valid and beautiful company such as Severin got to do so. It’s originally 1.33:1 (Full Frame), and the transfer is progressive. The extra they did for it surrounding the “controversies” of releasing TSD is interlaced, while the trailer (titled: ABDUCTED BRIDE) is progressive and gets straight to the point. Overall, The Sinful Dwarf is manipulatively sweet in its delivery. During the film you may find yourself loathing it somewhat (and a bit annoyed), but when it’s all over with, you enjoy it more than you had imagined. It’s a rather strange sensation, but with the subject matter involved, one which is very welcome. See it. But, don't see it sober.
Laid to Unrest by DrunkethWizerd

Email ThisBlogThis!Share to TwitterShare to FacebookShare to Pinterest
What the... Film Review, Horror, Independent, Movies

God I love this movie... it's so surreal it defies all explanation. I wholeheartedly agree with you suggestion of being under the influence in order to even watch it. If I wasn't drunk, I may have been traumatized. A+ review drunkman.

Thanks for the comments. Good to know that somebody actually reads this shit.