Bail Enforcers (aka Bounty Hunters) [2011, Canada] starring: Trish Stratus! The only reason I rented this, obviously, was Trish Stratus. She's right there on the cover... looking, badass(?). 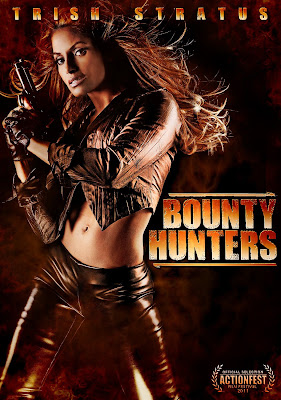 Trish has a lot of well choreographed fight scenes in this which look pretty good, but everything is so ridiculous here. She gets clocked in the face about a hundred different times throughout this movie and doesn't bruise or bleed once. A lot of wrestling moves and counters were used also. She looks good for the most part, but Trish doesn't look like she used to. I actually watched a tag team women's match from last year on youtube a while back just because she was in it and I thought "Oh wow, I've missed her..." but while watching it, I couldn't even tell which woman she was! (It's been a while.) And that's fucked up, because back in the day I was a serious about Trish the Dish.

Her acting is pretty brutal, but I didn't really expect her to be all that good. It's akin to watching Batista act probably... you know what you're in for when you rent something like this. She was especially bad when she would first enter buildings with her gun drawn and creep around. There's a scene where one of three guys in the strip club grabs Trish while she's serving drinks (two bottles and a short glass of rum), and she proceeds to beat the shit out of all three of them while holding the tray and not dropping or spilling a drop. That old gag. It was cute though. But a lot of moments in this move were kinda like that and it was pretty rubbish.

None of the acting was particularly good. Her two partners were OK, but man does this script really blow goats! The best dialogue was given to the mobster that that's after the guy they caught, and even then he talks for like five minutes straight and slows the whole film down. There's a lot of stupid jokes and a line about Asians not being able to drive that comes flying out of nowhere after Trish's buddy gets his ass kicked for the hundredth time. Did I mention that Trish wears a schoolgirl uniform for the most part of the movie?

And while that's nice and all, it's not revealing in the least and she looks a bit bulky in it. Other than that she wears leather gloves and black clothes and at one point a hospital gown and panties. She of course doesn't show her boobs (or much cleavage at all which is unlike her) but a stripper at the club she works at does, not that it matters. The one point where she changes clothes, stripping down to bra and panties, it's shot in extreme close up so you can't see a damn thing, and that irritated the shit out of me.

The director here did alright with the action scenes (thanks to Trish and Andrea James Lui, the Asian woman who fights her) especially ones in tight spaces, but this guy or his cameraman have no eye for composition or framing. A lot of the film looked washed out and colorless, rather dull. The movie was all over the place and while not ever technically boring, it wasn't good by any means. I'd recommend this for fans of Trish Stratus and really bad z-grade action films. Other than that, I'd suggest that any person reading this that cares about the quality of the films they watch just stay the fuck away!

I wouldn't mind seeing Trish in more movies, but I hope they're a hell of a lot better than this one. Until then I'll just have to settle for this fourty-five second clip from 2000 of Trish spraying her white t-shirt with water from a hose:

Yeah. That'll do it.
Laid to Unrest by DrunkethWizerd

That made me laugh... though I didn't spit out my beer. Gotta choke it back now.

Well I'm glad you didn't waste a good beer on my stupid comment.