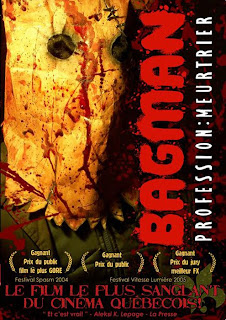 Le film begins with young and unbelievably hot girl named Kimberly (Anouk Whissell) hiding under a table. She’s incredibly frightened, and scattered throughout the room are severed body parts dripping grue. Her horribly injured boyfriend Brandon hobbles forward into the frame, proclaiming "He's gone. I’m sure of it." Of course as it would turn out, he (aka Le Bagman!) is not gone, as he strikes with a machete to Brandon’s side and then proceeds to slice his head in half! Kimberly screams in absolute horror, sending chills down your spine as the title card and squishy sound effects fade in.

She awakens in a hospital room where she is questioned by a pudgy, coffee lovin’ twenty-something detective. As she tries to remember who committed all the murders, we’re taken back to earlier events: Kimberly is on the run from this crazy, grocery bag wearing dude as we are introduced to four of the hippest, most down, pimped out, g-money wannabe gangsta foos ridin'. Due to an unfortunate McDonald's ketchup spill in the backseat, the young lass gets clipped. She of course lives (and screams again) and tells the hustlas a short but sweet tale of “Le Bagman.” They don't believe her of course and say his name tres times, only to have him show up from out of nowhere in his black trenchcoat and discreet yet massive height increasing boots. Confronted by the hardcore thugs, he proceeds to slaughter the shit out of them one by one in supremely badass fashion! 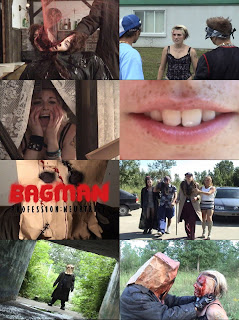 The last one living calls up the boss, aka 'Le Super Pimp' (“Shut the fuck up. Who’s the bitch?”, “Yo DJ, rock the beat.”, “Ain’t no thang like a chicken wing!”, ect) who brings along the rest of his soldiers! After Bagman halves all their plastic glocks in a single swipe, it’s all out total fucking carnage! Gnarly death and hilarity ensue. Heads are chopped in half with a shovel, there are disembowelments, motherfuckers are kicked in half, a g’s clock necklace is pulled so tight by the cord that it f’n rips his head off, butt cheeks are axed, and so on. 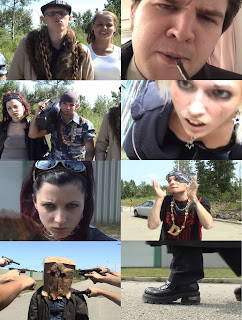 Slick, super quick editing and mad inventive gore shots (it does get sick!), rivaled only by the hilarity of it all, make Le Bagman the ultimate party film and cure to any single moment of boredom. Which if you've been watching a lot of the films put out lately, I must assume that you're pretty f'n bored. One memorable scene in particular: The sexy hoe who specializes in blowing darts is the only one to take Le Bagman down. But she can't blink twice before he's up and coming for her. She desperately tries to load her dartgun, and puts it to her mouth... only to have Le Bagman lift his boot and kick the long tube through the back of her fucking head! Then you know what he does? He twists it around and snaps her neck. Yeah... it's that glorious.

You know what I love? Arterial spray! There just isn't enough of it in movies. One of the many reasons why I'm so fond of Le Bagman is there’s tons of the stuff. It’s for fans of films like Leif Jonker’s ‘Darkness’ or Pablo Parés & Hernán Sáez' ‘Plaga Zombie: Zona Mutante’ and is another one of those rare home grown gems amongst the sea of overproduced crap out there.

Le Bagman is a twenty minute short film and the third in the Bagman ‘series’ made by all the same dudes and chick: Jonathan Prévost, François Simard, and Anouk Whissell. This film is a major step up from the previous two very short films. There's more “g's", more weapons, way more blood, tons more kills... and the kills, injuries and gore are all well staged, superbly crafted and imaginative to boot (no pun). The editing is so slick that Le Bagman comes off like a freakin' ninja! Killing and thrilling with no problem whatsoever. Super Highly Recommended.

Clocking in at a quick two minutes four seconds, Pub(licity) Bagman still managed to amuse the hell out of me. Set in a lowly video rental shop (with horror movie figures on clear display – nerds!), our three heroes emerge with DVD in hand and ready to rent... The Bodyguard! Yeah baby, it's all about Costner and these poutine eatin’ mofos know it. All of the sudden, Whitney Houston's "I Will Always Love You" is blasting from out of nowhere and they're looking around strangely (a most unexpectedly awesome and funny as shit scene). Of course, one of them is curious as to whether the shop has ‘Bagman’ in stock. Of course, Bagman: The Film is not in stock, but rather… in stalk! Muuahaha…

In the one that started it all, our main man here was long overdue for a haircut. And you know you can't just cut your hair, you've got to document it. But how you ask? On film of course! And let's have it chopped off by a psychotic killer. Enter... Le Bagman! (He’s in rare, first appearance form complete with fake machete!). This short film is Silent, and shot in Black & White. It's ok, but not nearly at the level of the two that come after it. Best moment: Do to the overwhelming sadness of having his hair cut off, our victim slowly pulls out a knit cap and puts it on. Oh, and as we come to find out, knit caps aren’t really good protection against sledgehammers… 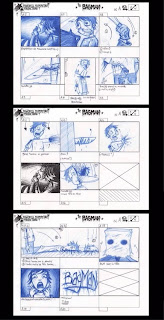 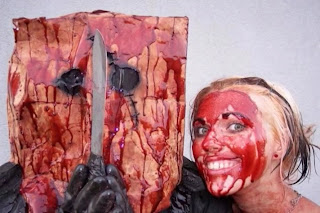 Technical lowdown: The film is in its original aspect ratio of 1.33:1 (full screen), is interlaced, and somewhat prone to some pixilation and many artifacts. The soundtrack gets very loud sometimes (the mix is far from perfect, though all the sound effects are awesome and music is enjoyable) and there's crackling, especially if your settings are bass heavy. The films are in French Canadian w/ some English, and with English subs. The picture looks great on standard screens, but due to the low budgetary of the film and independent distributor don't expect to be blown away if you’re watching on a high res monitor or high def TV. Expect however to be blown away by the main film itself, for it is nothing short of complete awesomeness and just bloody sweet! There’s a six minute ‘making of’ full of great bloopers and behind the scenes moments, a five minute picture gallery (full of great shots and really stylish storyboards), and four more short films: 2 Morts, Chez Tony Spaghetti, Itsy Bitsy Grampy and La Roue Faucheuse.
Laid to Unrest by DrunkethWizerd