NIN - We're In This Together

* Album Version.
** These two tracks were exclusive to the Vinyl release of The Fragile, and this Single. 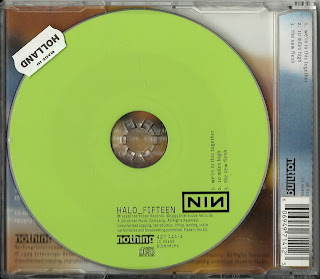 I've got a bit of a love/hate relationship with Nine Inch Nails. Trent Reznor's steady decline into elevator muzak has always left a bitter taste in the mouth. Now, I was never the biggest fan of NIN to begin with (to this day I only own somewhere around 18 of their CDs), and I'm not particularly fond of techno remixes, but something about even their lesser albums seem to draw me back after long periods of time. As if I feel the need to go back and revisit them, hoping maybe I just didn't give it the chance or *doubtfully* I was wrong. The Fragile album was my breaking point. Reznor's most accomplished, brilliant and damn near perfect album The Downward Spiral looks down upon The Fragile in disgust. And would spit upon it, if it weren't so damn helpless. The Fragile is like someone you really want to break up with, but you know the guilt would slowly just eat little holes in your soul... especially if that person killed themselves afterwards, and depending on if you feel things ...so you just go on ignoring it, and every once in a while pop it in for old time's sake. I guess that's what mood altering substances are for. Hmm.
We're In This Together (Watch the MUSIC VIDEO) was my favorite track on The Fragile album. This "Single" was actually three different Singles released at once, about a week after The Fragile came out. Reviewers have claimed that Disc 1 (above) is the best of the three and the most sought after since the track list doesn't suffer the flaws of the other two releases. I've seen this single release going for well over a hundred dollars online, and recently, as low as about fifty. As for the songs, 10 Miles High (LISTEN to the track) is definitely a creepy little number with shades echoing the HENRY: Portrait of a Serial Killer soundtrack. This song was later remixed by Keith Hillebrandt for the Things Falling Apart album (LISTEN to v2). This is a pretty solid and psycho-ish song, with minimal lyrics and both versions of it hold up extremely well. As for The New Flesh (LISTEN), I'd like to say long live it, but it is the weakest track here compared to the other two. However, that's not to say that it's bad. Sounding like an extremely lazy and hazy, mind-wandering portion from The Beatles album Sgt. Pepper's Lonely Hearts Club Band, the track is actually quite enjoyable on its own. If you can find this USED at any shop, which is probably doubtful, buy it on sight. I don't recommend buying any CD for more than fifty bucks unless it's a Limited Boxset that's brand spakin' new. Maybe after all this talk I'll go back and listen to The Fragile again... it's been a few years now. Maybe.
Laid to Unrest by DrunkethWizerd

Email ThisBlogThis!Share to TwitterShare to FacebookShare to Pinterest
What the... CDs, Industrial, Sounds