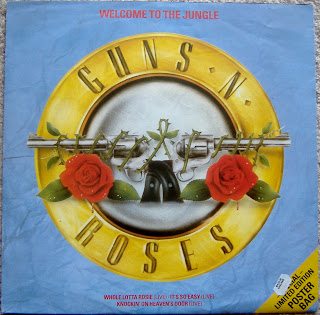 1. Welcome to the Jungle * [8-Bit Remix!]
2. Whole Lotta Rosie (Live) ** [CHECK IT, broooo...]
3. It's So Easy (Live) **
4. Knockin' on Heaven's Door (Live) **
* Album Version. Taken from the LP Appetite For Destruction.
** Recorded Live at the Marquee, London: June 28th, 1987.
This 12" Vinyl was available in a Standard release (GEF30T), Picture Disc (GEF30TP) and Poster Sleeve (GEF30TW). [Note: The Picture disc is the front cover (pictured left) with the blue border. There is also a version of this Single with a red cover and a Red Picture Disc border. Supposedly the red picdisc is "super scarce" according to this guy selling it for 100$, but I'm having trouble finding info on this release. Even my Catalog # isn't listed on most sites so who knows.] The one I own is obviously the one with the special Fold Out Poster Sleeve (I took some snapshots with my shitty digicam and posted 'em below). Got this Vinyl for 20$ way back in the day.
I really miss these old record shops that I used to visit when I was a teenager. Maybe there are places still out there that have cool shit like this for sale, but when I look around here all I see is trendy stores selling the latest pop culture fad bullcrap! I had to travel two hours the last time I came across a dingy, smokey, dark and dank record store with old Vinyl, bootleg Live CDs and Lucio Fulci Zombie posters for sale. When I was eighteen and back home I went downtown, walked into a hole in the wall Metal shop and bought a longsleeve Marduk shirt right there on the spot. Now I'm stuck in lameville and gotta drive long distances (and man I am sick of driving) to even attempt to find something sweet like that. But I can easily just take a trip down to the local mall and grab a lifesize standee of the newest dumbshit fad spokesmodel (don't feel like naming names, because that gives them power).
And I'm not trying to sound like a bearded old man here, but like many of you I miss the old days. At least when I got here there was a mom and pop VHS rental place with all sorts of fucked up horror films that I had been dying to see (Like Andy Warhol's Dracula, Shocking Asia 2 or 555). That place is now selling small garden figurines, wind chimes and fuckin' chocolate bars! Same owners, they're from Holland or some shit. I know there are still real places out there, I just gotta look em up instead of stumbling upon 'em. Even if some places are selling heavy metal records and rare shit on the net, unless it's a single guy in his mum's basement, there probably is a real store there too. And I don't mind buying things online, but I haven't recently and I'd rather walk down some stone steps into a real place that sells knives, pipes, CDs, Posters, Concert Tees, possibly things more illegal than bootlegs, and hopefully there's a chick at the counter with tattoos and piercings and she don't got the G-Wartz. Know what I'm sayin'? 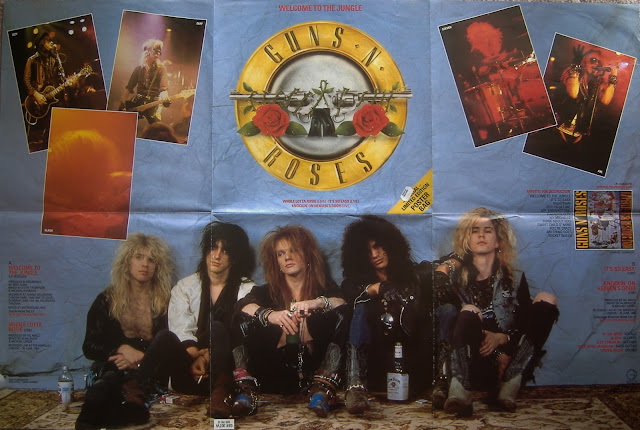 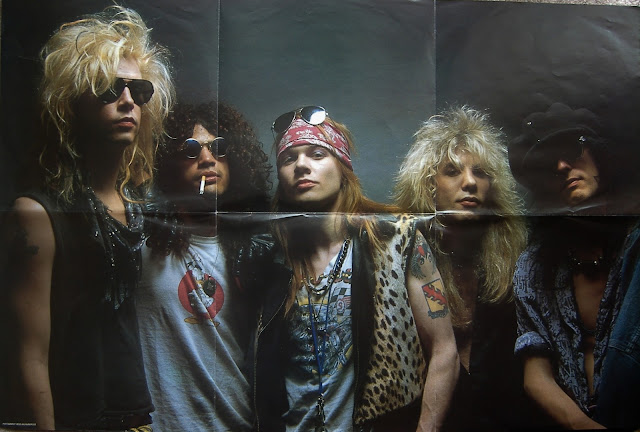 Sorry about the camera glare, but I lost my photoshop... and even if I had it, I don't got the time to fix the lines, nor their make-up. ;) Ghey.
Laid to Unrest by DrunkethWizerd

Email ThisBlogThis!Share to TwitterShare to FacebookShare to Pinterest
What the... Rock, Sounds, Vinyl

I used to have the bottom poster on my wall when I was in high school - saw them open up for Motley Crue on the Girls, Girls, Girls tour. EPIC SHOW!!