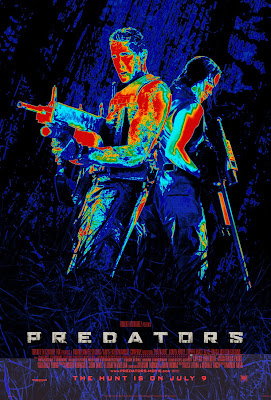 Once again, Topher Grace saves the fuckin' day! Spider-Man 3, while pretty in some places (I'm looking your way Bryce Dallas you should always stay bleach blond Howard as Gwen Stacy g-r-owl!) had about as much as it takes as this new film Predators. Well, without the camp to back it up that is. Though his inclusion as Venom in that film suffered greatly from poor planning on part of the creators, Topher was there in full form and totally badass to fuck shit up and make it all worth it. Drop that sumbitch from a parachute once more and let him go to town this time around in a film that stars... wait for it, and hold your breath underwater splice-style ...Adrien Brody. I don't hate the guy, really, and I don't mind the guy. It's good that he's at present time blowing up. I guess? At least he tried in this one with the whole deep voice, unemotional act. And it looks as if he's been hitting the gym, but that could have been for the remake of The eXperiment. But let's face the fuckin' facts, Adrien Brody cannot play anything other than Adrien Brody. Sure, he's probably got a weird fanbase. I never looked it up, but Tori Amos has been doing the same old shit for thirty-five years and insane people still dig her for some reason. I'd like to see those two uh... strangle each other with piano strings in a pit full of Nazi rapists. Too soon?

So without spoiling anything I can safely say that I am disappointed that Brody's character lived. Despite the lackluster events proceeding this point in the film, things were definitely looking up. Everyone finally got what was coming to them and some serious shit went down. All which allowed our hero, The Doctor, to finally reveal himself for what he really is and get down... to... business... Dawwww yeah! Things were finally getting good right? That asshole without a heart of gold hit his blast off and got blasted off and it was about time things were down to the wire. I didn't have high hopes for this movie, but when this point came I had the wonderment of a seriously disturbed child at Christmas time. "Yeah!" I thought. "This is going to be sweet!" Except for one minor detail: Brody's character wasn't on the fuckin' ship as it took off and exploded. I can only imagine that when he got on to that alien ship the music of James Blunt was playing and he rushed back to his new girlfriend with a tear in eye. Or maybe Forest Whitaker was in there butt naked, nothin' but a Predator mask, and ready to urinate all over Brody's skull and spinal cord! How would he know it was him if he had the mask on you ask? Jason's got a lazy eye and you don't see other people asking questions. Besides, you ever been pissed on? I mean involuntarily. It ain't right.

Predators did at least have a few moments that made me smile. The Samurai battle for instance. There's no denying that this scene was the best in whole trash bag. The sound technicians really got this one down and set the movie's only subtle scene with the perfect accompaniment of wind blowing against grass and sword. Much appreciated! And it even ended well. High point. The make-up for the Predators was, when they needed it, pretty damn good. No complaints there. The rest of the cast didn't seem that bad overall, despite being generic (or acting to a generic script!). Occasionally there were a few moments of fun to be had, and I'd say it's a worthwhile viewing (you have to now, since it's a franchise), but did it do anything new? Is it greatness? If you're a fan of decapitations and Topher Grace, then you're probably jacking off over this film as I write this. Which reminds me... it's time to buy a new keyboard and/or remote control.

There were some cool traps and the Preds looked awesome. The dogs were horrid and that shit lasted way too long. In fact, the whole dogs angle should have been left out of the movie since it sucked balls and the dogs looked like complete shite. I know Zombie Dogs are old school, but this is not an upgrade and a thousand spikes coming from their necks look f'n stupid. The other alien species weren't really touched upon, but they were addressed and it was decent. More could have been done but in the case of this movie, they did the right thing and ignored it for... uh, you know... plot. Nobody got naked, but a guy did almost check out a chick's ass and a guy with two voices in his head did almost mind rape that guy for being hard up. If only that final sex scene would have happened and everyone got mutilated, this film would have gone from 4/10 to 8/10. But alas... I'm writing this junk to make up for it all. *sigh* This movie could have had the greatest downbeat ending and it seriously would have rocked, but nooooo...

Topher Grace isn't really a doctor, but a Serial Killer collected along with the other troops and boy, he plays it out like a fucking master!

Email ThisBlogThis!Share to TwitterShare to FacebookShare to Pinterest
What the... Action, Film Review, Horror, Movies, Sci-Fi

Haha - nice review, very encouraging - its was obviously not gonna be the greatest thing ever, but a quick scan of your fun take on the shit suggests I'll at least find something to like here. This is one of those movies I was pretty excited about initially... but as its theatrical release date drew closer & closer, I conversely became less & less interested in spending good $$$ to see it in theaters... but I asked for a DVD copy of it for Xmas, since it's something that even my out-of-touch, movie-illiterate mother can find easily enough at Walmart or Best Buy. And I wouldn't mind adding to the collection, since I've already got both the other PREDATORs and I've bitten the bullet and have both the AVP's as well. Ever the completist, I am.

Just watched this the other night. I completely agree. Topher was the only redeeming quality. I also wish they had resisted from using the same song on the credits as the original. It drove me nuts the first time. Why they did it again was maybe just to throw another lame homage to the original in there, but it didn't save anything...including my sanity over the loss of my time.