About: "We meant to create something civilized. Honestly, we did. Under midnight skies, we imbued him with the velvety darkness of the cacao, the smoldering fire of chilies, the power of pumpkin, and the nuance of spices. However, our combination created an other-worldly beast, one whose intensity we could only hope to contain. We fearfully crammed him into our bourbon oak chambers. We heard him scream throughout the nights, and lay awake in terror as the barrels creaked. One moonlit night, our worst fears were realized, Xibalba burst forth, his power and strength surging beyond imagination. We fled in horror as he ransacked the temple, the subtle sent of bourbon ad spiced laying a civilized backdrop to the utter carnage." OK. 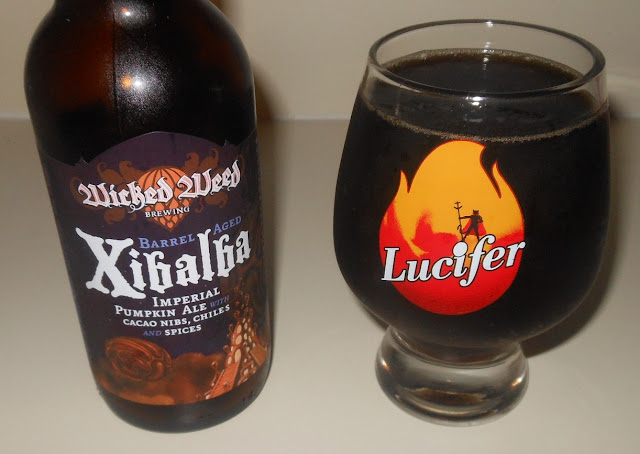 The head on this beer fizzled away in mere seconds, but as I sit down to write this review I look over at the glass and see an absolute fucking abundance of miniature carbonation bubbles rising up by the millions! I've seen tiny bubbles before, but this one tops them all. This beer has the smallest damn bubbles I've ever seen in my life. And they're just blasting upward so incredibly fast, I'm telling you it's cool as hell. I see a couple floaties roaming through the night skies of this brew as well, every so often one will stray from the bubble path and drift off. And this beer in a dark sumbitch as well. Not pitch black by any means, but a seriously dark raspberry brown that is just dark as night. Color is mostly visible around the edge of the glass.

The scent on this one is great. Very boozy... and man oh man do I loves me some booooze! Hot dayum. Bourbon oak barrels and this beer accompany each other mighty finely may I just say so ourself. It's rich, strong, creamy, spicy in more ways than one and guaranteed to send a blast to the face upon first gulp. It's also very candy like. The cacao, pumpkin and spices give off the sensation of munching on Halloween chocolates. And just around the corner from that are the chiles that no doubt take this one to the next level. Incredible. I'm gonna drink it.

As soon as this beer hit my lips I found it to be way f'n more mellow than I expected. First off, no real evidence of alcohol burn which is nice. That kind of thing doesn't really turn me off, but it does for some, so it's interesting at least to note. It's got a nice semi-sweet malty base, very pumpkin mash and shaved chocolate truffle, and it's all engulfed in that toasty bourbon. Swallow each gulp and you're hit with the chiles and spices that kinda just bounce around and tingle on the tongue. Top notch stuff. Four sips in and I'm feeling fire light inside. Aftertaste is a little grassy, and that's where the bourbon in here really lingers. I would have preferred the chili and spice to dominate the aftertaste and not the woodsy booze haze but that's an absolutely minute fucking compliant if even it is one.

Overall this beer is pretty sweet for what it is, it's got strong flavors and the barrel aging is really imparted into it. There's really not much more you can ask from this beer, but I'll give it a try. I would have preferred a little more emphasis on some cinnamon and nutmeg, but oh well. I would really like to try the original concoction of this beer, though I haven't come across it yet. My guess would be that the spices are a lot less subdued due to not being barrel aged. Though I love my fair share of barrel aged beers, I have been known to enjoy their original counterparts a little moreso. We'll just have to wait and see. Final thoughts: Recommended. Grab a bottle and treat yourself.

Here are some photos I took of my Addams Family soundtrack from Spacelab9 (w/ Sony Music and RCA apparently). Released on October 16'th 2015 in honor of this television show's 50'th anniversary, this deluxe vinyl edition was released in 4 Limited Edition variations: A Glow-in-the-Dark "Fester's Lightbulb" version (exclusive to Barnes and Noble), a "Lurch Green" version (exclusive to Newbury Comics), a "Cousin Itt Brown" version (exclusive to Hastings), and an extremely limited "Black Pumpkin Splatter" version that sold at NYCC with some leftovers sold online.

I of course bought the Glow-in-the-Dark version because you know, that's just damn cool. Even though the Black Pumpkin Splatter is one of the most beautiful things I've ever seen, I actually didn't even know that it existed at the time. If I had known, my decision would have been a lot more difficult. As it were with the three I was aware of the glowing vinyl was a no-brainer. And that's how I like to make all the decisions in my life... without using my brain. Haha, wow. This release is a single sleeve with a 12x24" foldout insert which is a pretty nice read and rather colorful to boot. 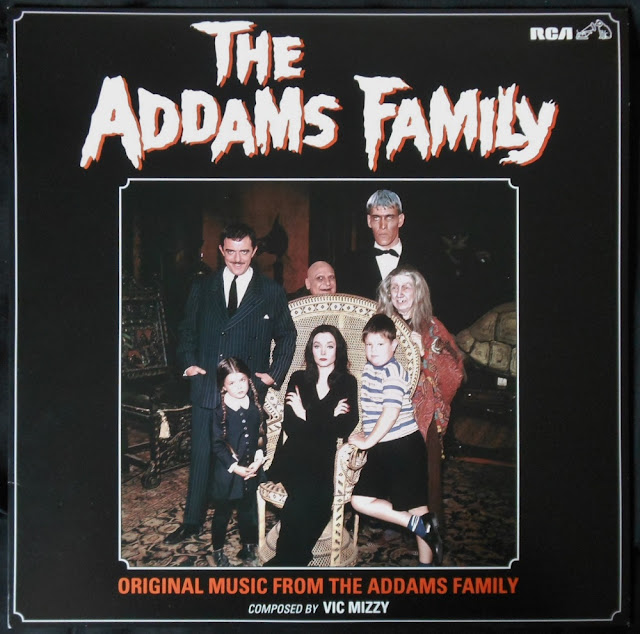 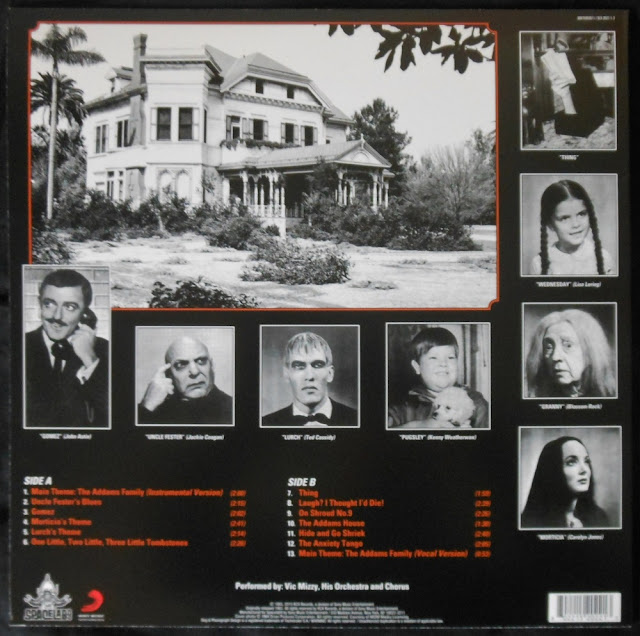 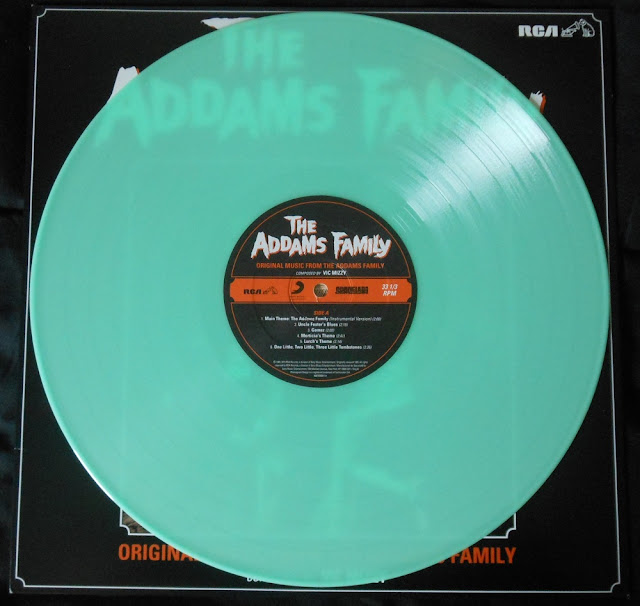 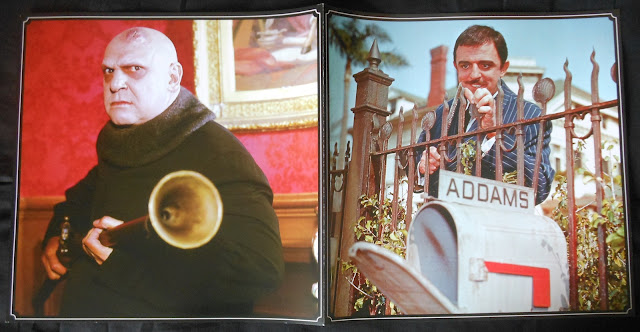 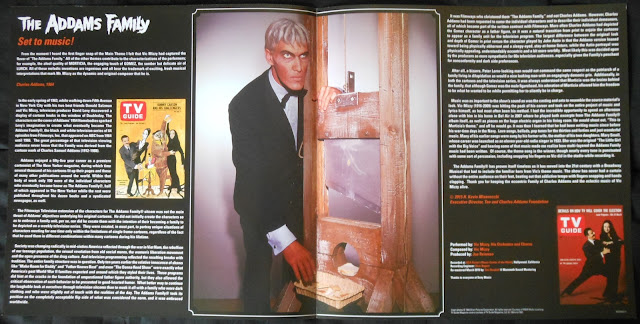 For anyone not familiar with the music (what in the fuck!?) it's old school as a motherfucker. It's real shnazzy, and jazzy and a little funky. Think in the realms of the scores for Barbarella or Vampyros Lesbos. That's where this kind of music would fit in. Probably not as weird as those two though as it's mostly upbeat tunes, but genre-wise for sure. The album itself has a pretty moderate hiss throughout the whole thing and sounds a bit aged, but in this case that really doesn't bother me at all since this music is old as hell and that just adds to it for me. It's approximately only a half hour long as well, which goes by pretty fast so it's good for a quick listen.

Email ThisBlogThis!Share to TwitterShare to FacebookShare to Pinterest
What the... Sounds, Soundtrack, Television, Vinyl
Newer Posts Older Posts Home
Subscribe to: Posts (Atom)
My words are my own and as of posted from their creation forward I hereby claim originality to them. Pictures may prove to be promotional items and are the sole possessions of their respectful owners and/or companies. I do not sell, nor do I buy. I only rent, so therefore, nothing I own is truly mine.