Silent Night didn't really do it for me. I liked a few things about the movie, and I'll talk about those few things before I go off and tear this fucker a new vagina. Here's what I liked: 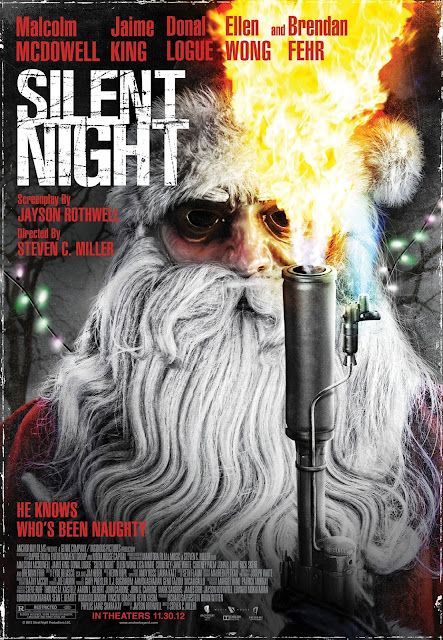 1) It's a decent enough old-school throwback. While it may fail in quite a few areas when it comes to being an old-school throwback, it does somewhat look and feel like a back-in-the-day horror. While these type of films may not be considered "exciting" these days, the over-saturation of today's "stylistic" viewings does lose its charm after a while, and it's always a bit of a fond remembrance-type thing to go back. This film's attempt at this was at the least semi-admirable.

2) Jamie King (Sin City) and Donal Logue (Grounded For Life) are two people I will watch in whatever they're in. Donal really steals the whole fucking show here, dude's a total boss, and it's obvious since he's the only one who really gets to put up a fight against the killer. *spoilers* He's not the killer. Jamie does what she does best as well, though it's hard to see it for the most part since everything is so dark and she's made out to be plain and "unattractive". While I respect Malcolm McDowell's array of work, he's basically just doing a re-make Dr. Loomis here and it's distracting. But more on him "phoning it in" later.

3) The Blood. While most of the bloody was "par for the course", we the viewers were treated to a few bits of gruesome goodness. And it was nice to see some variation in the ways this Killer Santa killed his naughty foes. At least the kills never really got too boring. Way to mix it up, guy! 4) The Boobs. It was nice to see a topless girl running around for a while trying to get away, but let's face it... the My Bloody Valentine remake did it a fuck of a lot better than this. 5) The Intro. I really loved how he made his own outfit and after getting into it all, pulled out the fist-pump at the end like a corny motherfuckin'-badass. It was so lame that it was awesome.

And here's the Shit that bugged me and took me out of the film: 1) The Color Tinting through the whole film just sucked and it looked like total crap. It was drab as hell. Was this intentional, or were these natural hues of the Midwest? Doesn't matter because it looks boring. 2) Also, damn near Most of the Lighting completely sucked (need I say all of it?). What makes it even worse is that a lot of shots were filmed in dark rooms with bright windows directly in the background (!) and it was horribly distracting. Basically, the movie looks as if it was shot by a third grader. Why in the fuck would you film this semi-attractive woman with her top off, in front of a blinding window shade where every bit of light obscures the shot? It seems as if every decent shot in this film that could have been is corrupted by shitty lighting and shot decisions.

3) It's not enough that the movie looks so bad, but The Script is Horrible! It tries way too hard to be "cool", edgy and obscene. The profanity doesn't help the film at all. You got a movie here that's trying for an old look and feel, yet at the same time a little girl is slapping her mother's medicine out of her hands and yelling "fuck church" because she wants to go to the mall. Now I didn't mind that scene and was actually pleased that the little girl was immediately killed off after that *spoilers*, but it's just another scene in a series of random scenes that have little to no connective tissue. Overall I feel that the story was haphazardly written.

4) All of Sgt. Laughter's lines. Did they purposely make every single fucking thing he said cliche just for the hell of it? I suppose that really goes hand in hand with that throwback thing. A lot of lines in old horror films were really lame but they got a funny kind of inside joke cult following among friends. I don't think you can recreate that type, especially when Malcom McDowell didn't even seem to give a fuck the whole time. Not that he was given any good material to work with. He mostly just walks around and spouts out catch-phrases.

5) This Movie is on the edge of Boring! The colors and dim lighting make it even worse, but underneath the visual aspect, the movie just isn't terribly interesting. It's easy to drift out of the movie watching experience with this one. When I watch movies I  It doesn't hold you to the screen. Luckily all of the kills and the boob shot were timed in a way that once boredom began to set in you'd be taken out of it for a second. And while I did appreciate the boobs of the beautiful Cortney Palm, I was really hoping to see Jamie take it off... or at least Courtney-Jane White die topless on that deer rack.

6) The Ending. So at the very end *spoilers* it reveals that the Santa who built a homemade flamethrower and killed his cheating bitch of a wife with it, only to be shot down by a police officer, is actually the father of this movie's killer. Turns out that his son was sitting in the back of the truck watching the whole thing go down. So he witnessed his father kill his mother and an officer kill his father afterwards, and wouldn't you know as it turns out, the cop in question was the father of our story's primary chick. How fucking convenient. That's a relatively competent explanation. But wait?! There's more...

In the movie they talked about a whole series of murders taking place every Christmas from town to town throughout the years, late after the flamethrower massacre had occurred  Now, this whole back story doesn't really match this dude's actions at all. He seems to punish people who he deems to be "bad", which is a strange topic in itself, since how did he know that pre-teen girl talked a bunch of shit to her mum and was a total little bitch? This scene occurred and then he walked up to the house. Was he standing outside the window the whole time or something? He surely couldn't have known that girl. Then he goes about giving other children "gifts" (the gift of not-death for the most part), which shows that he has some sort of fucked up system of principles.

But then why did he go about killing for so long from town to town? Especially to do that for so long, only to finally murder his father's killer, a police officer who according to his daughter was a "Good Man!", and then nothing really stands out or comes from the act. Wouldn't you think that particular murder to be a bit important and closer to the finale? It happens off-screen and they hardly even make a scene of it apart from the daughter crying and mustering the courage to go get him. So we get a whole bunch of graphic scenes of people we don't care about being murdered, but the one murder that would make sense of everything and tie the whole film together is pretty much just a forgotten afterthought. Is the killer simply insane?

So what in the fuck is going on here and why is this shit so sloppy? I don't mind nonsensical stuff. Helicopters falling through movie theater roofs for no god damn reason whatsoever, or your stalking killer ending up being the obsessed lesbian friend you thought you knew. But this was just lazy. And are we to just assume that after getting away from the blaze at the end that the killer just drives off, only to murder in another town the next year? It feels as if this movie has a lot of little ideas that went into it, but all of them were only half thought out and nobody cared to finish them. It's pretty amazing that I actually finished this movie, but I did so due to my own fucked up system of principles.