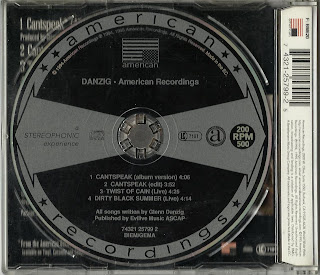 I've always loved Danzig's song CantSpeak [watch the MUSIC VIDEO]. I didn't hate the slight change in direction that Glenn went with 4p. I embraced it and still to this day really feel that 4p and his two previous albums are his most accomplished works. If the man had remained on this technical level and perhaps had been more open to his bandmate's artistic influences, Danzig 5 would more than likely had been celebrated triumphantly and treasured by his fans. Unfortunately we all know what really happened. I dig the sound of this track and yeah, I even think it rocks when all that distorted shit kicks in around the middle mark. The music video's curious visuals and cool lightning effects amplify this songs strange feel and gives it another dimension. If only the Video had been included in this CD package instead of that Radio Edit track. Or perhaps even discard the Album Version and put Let It Be Captured as the secondary track. CantSpeak's instrumental is after all LIBC played backwards, so that would have been at least interesting.
The Live version of Twist of Cain here takes what can be a sometimes underwhelming & repetitive song and gives it a fresh mind-tingling vibe. John's guitar work here is insane, as he changes things up and inserts little bits of awesomeness all over the place for seconds at a time. The distortion is right on and it's got a gritty feeling that improves upon the original version. It's not technically perfect since it is a raw performance, but the band puts all of their effort into getting this one rockin'! On the second Live track here, Dirty Black Summer, Glenn seems to be really having fun with it. Sounds like he needs to drink a little water though near the end of it. It should be NOTED that these two tracks were recorded during that same concert in '94, yet were not included on the Black Hand CD Set from '01. That's a pity, but I guess it gives Danzig fans good reason to go out and find this Single. Even if it's for Twist of Cain alone. This is a worthwhile, yet imperfect Single.
Laid to Unrest by DrunkethWizerd

Email ThisBlogThis!Share to TwitterShare to FacebookShare to Pinterest
What the... CDs, Danzig, Metal, Sounds