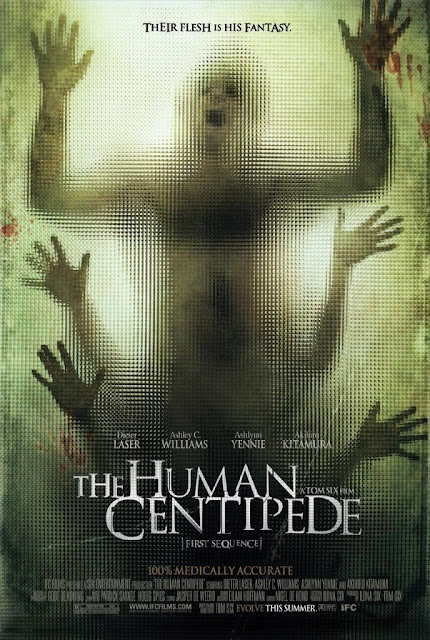 I've seen a lot of weird shit in my day, so I'm not going to be traumatized or anything by The Human Centipede. In fact I'd say that it was a quite delightful experience to finally view it, and on my birthday no less! I enjoyed it while eating Chinese food and drinking shots in the dark. THC has actually been a topic of "conversation" with a few of my co-workers for a couple months now. I brought it to their attention by playing it off as if they wouldn't want to know about it, which in turn got them more interested. Then I would go on with the whole synopsis of the film and that would be it. Pretty soon we were all obsessed, despite not even seeing the picture. Soon we were randomly quoting trailers at each other "Oh no, I've gotta shit. I'm so sorry!" Cue agonizing human centipede rising-up groan.

The Human Centipede sure as fuck gained infamy quickly. I've seen its success compared to the whirlwind of hype that surrounded Snakes On A Plane back in the day. While SOAP was all over the net, and though THC is as well, I've been seeing a bit more of THC on the tele. Strangely it seems, that THC has been acknowledged by even regular ol' 'Normies' as something to be seen. Perhaps due to some unfathomable form of curiosity, or that now in this internet age where anything gross is just a click away, nobody is truly normal anymore. Note that I've never considered anybody I've ever met as normal. As a matter of fact, the weirder you appear and/or are on the outside, the more comfortable you may make me feel. And I am one uncomfortable dude, mostly due to all the facades of people claiming to be "regular".

A couple years back Kevin Smith brought "ass to mouth" into a more general public eye with the constant verbal droppage in Clerks 2. Now I suppose The Human Centipede has brought the notion full force and permanently embedded it into the minds of the "general public". Due to the tremendous amount of widespread wonderment over the film, I'd say that the general perception of THC is that of comedic value rather than horrified traumament. The premise of a Mad Doctor sewing three people ass to mouth to make a pet human centipede cannot be pondered for too long a time without eventually bringing a giggle or a laugh. As a sick motherfucker, I'd say it's downright hilarious! Even Daniel Tosh from the tv show about the web show Tosh.0 did segments and follows it seemingly religiously. Click HERE for his twenty-five minute Spoiler monologue on the film.

Despite being hailed as utterly horrifying and gruesome, THC isn't actually all too graphic of a horror film. Maybe I'm desensitized but I thought there would be one or two shots equivalent to hardcore porn at some point during the merging of flesh. It's all shot reasonably tasteful (though the director claims this is a trick in order to blindside the viewers once the nasty, truly vomit inducing sequel hits). And while what's happening on screen is indeed horrific, it's not some suspenseful cat and mouse sewn ass to mouth game, but rather a creepy yet lightly humorous affair. Any comedic properties in the film seem purely unintentional since the director maintains a straightforward dark tone, but I can see past that shit. I know he was brimming with glee as he shot this film, laughing all the way.

There are a few squirm inducing moments despite being a film of little gore. When Lindsay chews through the straps and jumps out of the bed to run away, she forgets to take the needle out of her arm and it suddenly just rips open this long hole that gushes blood for the next twenty minutes. That scene alone has to be the most shocking, as it was both disgusting and surprising. Aside from that there weren't many 'holy shit' moments, unless of course you count the 'holy shit, I'm going to shit' scene. That part of the movie however doesn't send a shock down my spine, but rather fills my tummy with bouncing gumdrops of joy. The look in her eyes while he prays for forgiveness as he shits into her mouth is worth the price of admission alone. And I was laughing like a madman when I finally got to see it all go down... her throat that is.

Does THC live up to the hype? That's not always an easy thing to determine. I enjoyed it, and I guess that's all that matters to me. The Human Centipede is a very flawed film, but I don't think it really cares. It's competently shot visually and everything looks magnificent, though there are quite a few unexplained occurrences that defy logic. It maintains its fucked up and over the top tone throughout, but didn't seem to reach its full potential (I'm not sure it was meant to however). The girls are dumb as all hell (I suspect they say eachother's names so much for fear that they'll forget them), but they get shut up quickly enough so we're saved from their annoying voices. Every character at one point, and sometimes more than once, makes the worst possible decision they can. Is this done to make the film appear surreal and humorously astonish the viewer, or simply to just piss the overly anal people off? Some may nitpick these things, but stupid decisions by annoying bitches tripping over plotholes are what make these movies go round, so I just take em in stride.

What blasts The Human Centipede into outer space masterpiece land is Dieter Laser, who plays the Mad Doctor in the film. This fuckin' guy is the most magnetic, scary ass dude out there. He is the true shining star here and everything he does is freaky as all hell. He comes and stands in the doorway of his basement hospital room, turns on the light and looks at his three kidnapped victims with a smile like he's just been shot by cupid's arrow. After he finally gets his human centipede to rise up and they're all crying, he breaks down and joins them (though, his are tears of joy). There's a great deleted scene right after this where he gets up and starts dancing around the room, then suddenly just erupts into fist pumps of complete awesomeness. "Yeah baby! Who's the man now!? Whoooooo!!1" He nearly puts Nic Cage's "I'm Castor Troy" prison outburst in Face/Off to scene-chewery shame.

If you're a fan of really awful films, comedies that pose as horror, Junji Ito & David Cronenberg (and one to not harshly comparison judge), hitting up the ATM, and sewing, then I can safely suggest you see The Human Centipede. Whether its considered the "worst movie ever" or "refreshing", THC has one thing majorly going for it, and that's popularity. Everybody is talking about this, and just hearing what the movie is about, people are definitely curious to see the atrocity. The only demographic I don't really see coming to the table are tween girls, but I've got the final solution to that: Sparkling Human Centipedes! That watch you sleep! "I know what you are." "Say it!" "Human Centipede." "Then ask me the most basic question, what do we eat?!" You heard it here first.

Haha - a glowing endorsement of a film that has so much hype surrounding it that I didn't even care if I saw it anymore. "2 Girls 1 Cup" has done far more to desensitize me than any old ATM medical experiment gone awry will do. With the so-called shock value of this film pretty much already dispelled for me without even seeing it, I gotta admit your gleeful recommendation at least halfway re-sparks my interest.

The fun of it all drew me in, but the performance of the Mad Doctor kept me there forever! This guy IS the movie. Fuck all else.

I liked this one but I'm a little biased since I got to interview the actors and they were all super nice. My biggest problem with the movie was the whole medically accurate thing. The actual procedure, maybe, but they wouldn't have survived for as long as they did. The middle and back person would have choked on the person in front of them's shit and died. I also didn't like the lack of balance between the campier stuff involving Dieter Laser's character and the seriousness of the film (mostly the ending). Other than that, though, I enjoyed it. Laser definitely needs to do more horror movies. Can't wait for the sequel. Happy belated birthday, by the way.

Thanks. I'm old as fuck.

Dug this film so much! Just reviewed it on my blog for Halloween. Looking forward to the sequel.

Ha! I love the human centipede.
thank you for the nice comments, your blog looks sooo interesting, I'll watch you ;)