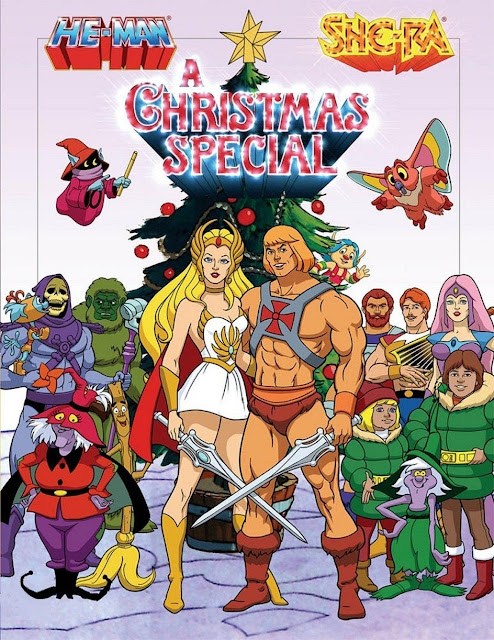 The He-Man and She-Ra Christmas Special is the biggest pile of horse shit that I've ever seen in my miserable life... or at least when it comes to the MoTU series, and probably even the shittiest out of every animated Christmas special ever made. Not only does this forty-five minute cartoon have no redeeming qualities at all, but it's in fact fully capable of pissing off even the most tolerable of He-Man fans. After all, there's only so much fond remembrance that the toy-line can bring. Let's face the facts here, He-Man is a pretty "silly" show and it hasn't exactly aged well. To call it "silly" might even be an understatement, as some of it is just downright fucking stupid. It's bad enough that Prince Adam wore a lot of pink and strutted around in tights all the time with those frilly bangs, but did he have to be such a fucking idiot all the time too?!

Even though most shows like He-Man, Transformers, G.I.Joe and Thundercats have had stupid moments and horrendous episodes, He-Man is by far the worst offender when it comes to unbridled stupidity and cheesiness. Thundercats has really maintained a maturity and intellect, though Lion-O is just a naive kid in The Rock's body so there's a lot of cause for dumb moments, but that's part of the story line. Transformers may get pretty lame at times, but it's mostly robots fighting and cool looking cars and planes speeding, so you can forgive that easily. G.I.Joe was over the top, but man was it a smart show with a lot of crazy shit going on. But He-Man, that shit was just lazy as all fuck. They used the same shots over and over in every single episode, and most of the dialogue sounds like it was written by a monkey jerking off.

Like I said, most of the other cartoons has so many redeeming qualities that the little things could be easily forgiven... but I'll tell you what can't be forgiven easily: This mind-numbingly horrid spoon-fed shit-stew of crap! So the story goes like this: Orko hijacks a space cruiser just for fun and because he's a dumbass (I guess he does this kind of shit all the time since he's comic relief) and because of something the ship crash lands on Earth. He finds some children roaming through the snowy forest area nearby and decides to befriend them. He should have just let them eat those poisonous berries they were picking. Meanwhile, Man-At-Arms sends Princess Adora off to some weird ass mermaid planet where these pointless, not-really-transforming, pretty dumb looking, hot-girl-enslaving robots called the Monstroids do a lot of nothing and then get their metal asses handed to them.

We're then treated to the boy and his little sister(?) telling Orko the story of Chris... oh wait, no, they just cut back to them after all that so-called action and the kid says "...and that's the story of Christmas!" Wow. Talk about cheap. Which brings me to how little actual "Christmas" stuff is in this special. They played it safe alright. So safe in fact that I'm surprised they even mentioned half of the shit that they did. Anyways, the Princess has some lesbian sex with one of these hot as all fuck mermaid wenches and then steals her glowing crystal of power that has the power to do something or other concerning the ship that Orko crashed somewhere. It all ends up with them beaming him, the ship and the kids (you know, for some added excitement) back to the planet of Eternia. Orko goes all orko and convinces all the responsible gods of the kingdom to keep the kids for a while so they can tell everyone about this thing called Christmas. One of She-Ra's man-buddies and a chick named Perfuma sing a song with the two kids that is so delightfully horrid, it'll make you want to go out an buy a Foo Fighters album just to get the pain out of your brain.

I blacked out right around this point, and really, it's a bit of a blur... but I'll try to make sense of it, even though, believe me, there's not much sense to make. Skeletor was of course at the time doing something evil and sinister, plotting to wreck something or take over the kingdom, and just fucking around per usual. Something happened on another planet(?) with these things called the Manchines, which are like these little super-fucking-gay cute species of weaklings that need to be obliterated as soon as now. I remember drifting in and out of consciousness and that it sucked. Oh man did it suck balls! So Skeletor ends up kidnapping the kids from their kidnappers somehow and takes them on some LoTR-esque type journey through the snow covered mountains of madness to his rape-cave. Why he didn't use his astro-glider or his rescue peeps I don't know why, can't remember, but Skeletor shouldn't be walking to his own fortress. Where the hell are his cock-sucking minions anyways?

Suddenly, a Wild Snow Beast appears. "I don't know what's happening to me, but I must save the children!" Wait, what the fuck? Did Skeletor just say that? Yes, he did, and on top of that, he busts some chill ass moves and that Snow Beast drops like a 12 year old girl at a Twilight: Breaking Dawn Part 1 premiere. The kids keep calling him nice after that and he pretends not to like it. "Listen, I'm not nice and kind and I'm not wonderful!" Sure buddy. The kids start talking to Skeletor, pleading and saying shit like "Please Mister, we're cold." Skeletor is having none of it, but wait... what's this...? Something is happening to the blue-skinned, buff-ass grinch with the face of skull. He magically produces and gives the kids winter coats, and then on top of that, carries the little crying Manchine puppy so it doesn't get cold. What in the fuck! What's he going to do next, start baking cookies and help them decorate a stupid tree!?

Fuck you Rick Berman! Out of nowhere The Evil Hordak shows up in a huge, dick shape helicopter to save the day. And it's about fuckin' time too. I can't take this shit no mo.

The Evil Hordak of course is a complete badass here and just one bad motherfucker who couldn't give one single shit-lump of coal about whatever this Christmas is or these little bastard kids. As always (since the dawn of the 80's cartoon age) when a new villain is introduced into a cartoon and then there are two main villains, we all know that one of them must go out looking like a bitch. If "Never Back Down" and "Michael Bay" ever taught me anything, it's that. Remember The Mighty Megatron bowing down to that punk son of a fuck The Fallen? Calling him "master" and all that bullshit? Yeah, it made me want to lay ass bricks. That's pretty much the deal with Skeletor here. He's reduced to looking like a total dickwad. It's not bad enough that 80's cartoon villain leaders had to always yell "retreat!" and "you got me this time" and shit like that, but now this fuckin' guy is sucking alien puppy dick and camping out with little kids. It's sickening.

There's hardly any Christmas stuff in this show, it's all about peace and caring and happiness. That's not what Christmas is all about! ...It's about presents! Dur. He-Man does dress up like Santa though, and it looks stupid as shit too. Skeletor even says things like "Thank goodness this Christmas only comes once a year, because I don't like feeling this way." It's horrendous. I don't know if these kids are boys or girls, or if one is a boy and one is a girl or they're both just non-gendered or what the fuck is going on. It's really ambiguous. The episode is filled with nothing but totally lame puns. Every action that occurs is stated out loud while it happens and the reasoning behind why it's happening as well. It's very mind-numbing. I feel even stupider than I usually do after watching this kid shlock. Final Thoughts: This was some bitch ass shit I'll tell you what! Skeletor ain't no caring, nurturing, puppy-dog cuddling, warm and fuzzy lover of some genderless punk kids.

Email ThisBlogThis!Share to TwitterShare to FacebookShare to Pinterest
What the... Animation, Bad Comedy, Christmas, MOTU, Television

I was gonna watch this, but I think I prefer your retelling much better than the real thing.