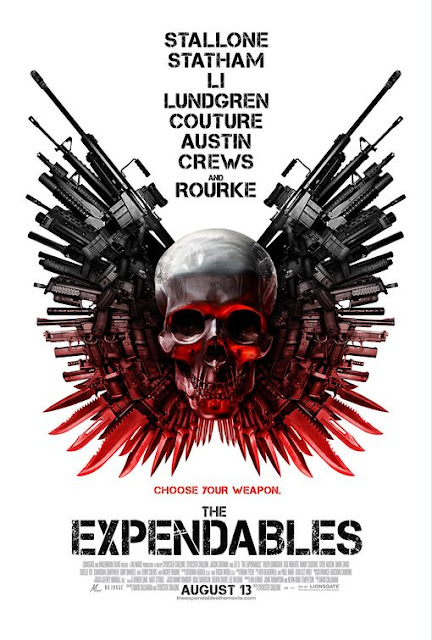 Dare I say that The Expendables is far too action-y for its 103 minute run time? That doesn't correctly convey what I'm intending to say. I'm not saying that any action should have been removed, far from it, after all this is an action film. But I feel that the film could have benefited from being fifteen to twenty minutes longer, giving more screen time for scenery chewing and character development. Quite a few scenes could have been about a minute or two longer, spread throughout to make it less noticeable and that perhaps could have been enough to make a some of the "all star cast" seem more than just cardboard cutout characters. Maybe that's all an illusion though, since the film is the dinner equivalent of eating a salad bowl full of loaded mashed potatoes. Yeah, it's good if you're drunk and stoned, but then again it'd be best to just ignore what just happened and enjoy the gluttonous behavior. Each character does at least get his moment to shine, but it all seemed a bit rushed like Stallone didn't want any of those scenes getting in the way of the action. I'm not asking for full back stories or anything like that, just an extra two minutes for the other characters, perhaps something introspective in nature. It was rather nice of the director however to get the full team together for the finale, not to say that I didn't mind the Stallone, Statham and (lesser so) Li show.

During the opening credits I noticed that there were two editors listed. I haven't checked, but by the looks of things there might have been more, even if it's simply Stallone himself. While there were a lot of very nicely framed shots, the editing seemed to be all over the place, especially when it came to shaky-cam hand-held scenes. I guess that's what the norm has become so there's nothing to do but deal with it. Then of course when they slow things down, there's Rourke's lingering blue-hued close up and the blurry after shots of Stallone's reaction... a strange decision, but I'm just nitpicking I suppose. The movie is definitely gritty looking, and not to mention seemingly more realistic compared to newer action films which is a plus (a lot less show off CG). A very nice throwback to the old school days where you didn't need super inventive obstacle-like near death experiences to wow the youth (think the nearly crushed by a spinning airborne car scene in Die Hard 4). Just a long shot of Terry Crews mowing down twenty or more South American soldiers with an Auto Assault-12 Gauge with a drum magazine full of explosive rounds! Check out the guns from the film HERE! Even the plane stunt with the machine guns and napalm death was straightforward, yet extravagant in a way. It wasn't over the top (no pun), but a rather exciting moment in itself despite the fist pump of awesomeness that occurred seconds later.

It was interesting to see what looked like actors seemingly ripped right out of other films to stop by this one. Kind of funny to see Rourke painting that guitar with the same intensity that Whiplash created his electrified armor, dirty locks, shiny teeth and all. Eric Roberts is pretty much the same dude from Dark Knight, and Stallone is still wearing that jungle eyeliner. Statham, Li, Stone Cold, and the rest of them basically play themselves. It was nice to see a few actors who had nothing on their plates getting back into the action. Shame that Van Damme didn't just say fuck it all and join the team for the new Rambo film... er, I mean... and don't you just love how would-be rapists always get the most gruesome and graphic deaths in Stallone's films? Sure, there were some other nasty deaths, but those two guys were served up somethin' special. It was definitely the best kill scene in the film. And the non-kill scene worthy of mention would have to be a line delivered by Bruce Willis to Arnie and Sly as they took not so subtle jabs at one another:  "You two aren't going to start sucking each other's dicks, are you?" That line alone is more badass than any explosion they could have come up with, and not to mention that it's funny as hell.


I've never really been a serious Action nut. I've seen all the essentials, and many of the lesser films (including new offerings) but have never really been a collector of the stuff. Honestly speaking, I'd rather go see something like Vicky Christina Barcelona than Rambo IV. Luckily for me in regards of The Expendables, I didn't go in with any sort of expectations. It was cool to see them all get together, no matter how brief or wink nudge it got. With a little more time given to the script, and a bit more running time it could have been a slightly better film. I'm not saying go Christopher Nolan style or anything, but hopefully the extended version will give a deeper presentation. I'd like to see a scene of the guys sitting around a table in the tattoo shop with a pizza in the middle of them, where Stallone in his sunglasses takes a slice and cuts the tip off of it before taking a bite. That would have been classic. And weird. But after it's all said and done, you can always count on Stallone to bring a little Ultra-Violence to his new films, and for that, I can totally recommend that you see The Expendables. It didn't really blow me away, and is an imperfect film (poor CGI, Willis not returning for another minute later after plot developments, hot spanish chick didn't get naked, ect) but it's a fun time waster with an extra dash of brutality (in more ways than one).

Thought this was a lot of fun, but hated the shaky-cam and the CGI! The 2nd one had a bit less.