Underworld 4: Awakening 3D (2012) Rated: R. Thanks for joining me in this Spoilerific post. This is a Cinema Review, so let's get on with the quick thoughts of what I uhh... thought. Yeah. 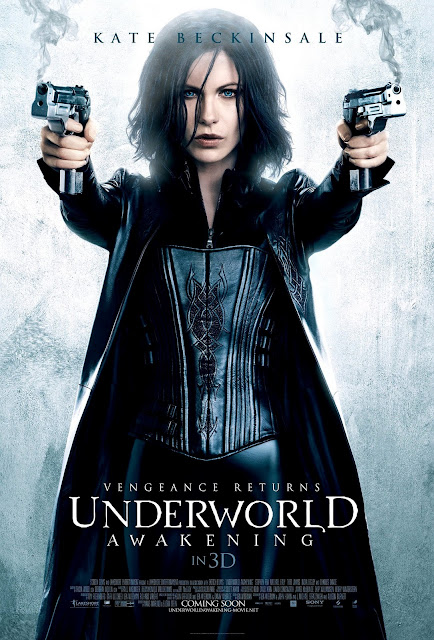 I'll talk about what I liked first, which is of course: Kate Beckinsale. Without a doubt the hottest woman on the planet! I will watch anything with Kate in it, but the fact that she's featured so prominently in a horror franchise with vampires and werewolves, wearing nothing but tight black leather, it just makes it that much sweeter. I become fixated and mesmerized by her in these films, and I just can't get enough of her close-up shots. Aside from being drop un-dead gorgeous, she also kicks (and kills) some serious ass here. A lot of fight training really payed off, especially this time around where it's basically non-stop action from start to finish. Selene fucks shit up and leaves a serious path of destruction in Awakening. She's a total badass! She even gets a killer slow-motion walking away scene after showing off some of her skills.

And this path of destruction is GORY as all hell. I may have to go back and revisit the previous films in the series, but this one I do believe has more blood, gore and gross-out moments than all three of the other movies combined. It was sick! The violence is intense, heart pounding, graphic, and explosive. With a runtime of only 88 minutes(!) this may as well be a long Underworld music video. The unending action sequences and blood splattering death scenes are balanced out by the film's beautiful, sleek and colorfully toned look. It all just looks so glossy and magnificent, which is another thing I've really like about this series. A lot of great care is taken with how everything is presented. The 3D wasn't super over the top but there were a lot of great moments where a lot of images came out you (such as glass quickly flying after explosions, blood spattering, ect.) and none of it was overly obvious where it distracted.

A few things I didn't like or that slightly bothered me: The very first thing we see is a pointless recap of the first two films, and I hate that shit. It was less than a minute but it still bugged me. Afterwards they go into a 2D "black and white" news report style intro that sets up the film. That should have been the start of the film and not clips from the previous entries. It was distracting to see all this 2D after all the 3D trailers and before the film officially started. The transition was far from seamless when the new footage hits. Another thing, is they fogged the potential nudity. Just as in part 2 where Katie's ladies were conveniently covered by an arm, CGI smoke and haze filled all of the positive space here, obscuring her body parts. Booo!!1 Scott Speedman wasn't in this, but his character was and it obviously wasn't the same dude. Not that I really care too much about that, as he was hardly in the movie for all of twelve seconds and you never really got a good look at him.

Which brings me to the script. This story is probably the weakest amongst all four movies. I still enjoyed the hell out of Part 3 (for an Underworld film without Kate), but this film just ends up seeming weird in a lot of parts. Some of the dialogue is quite stiff and the very new relationship between mother and daughter needed to be explored deeper than a gentle, two minute scene. In fact, just about every character interaction in this movie seems slightly awkward for some reason or another. Awakening is also essentially an open ended film, which doesn't help matters. On one hand I actually thought it was pretty awesome how fast paced the film was, because everything was just so jam-packed and it never got slow, not once. But this movie could really benefit from a longer cut. Another half hour perhaps? Overall, a very incomplete feeling movie that left an instant gratification, but ultimately will end up best viewed back to back with part 1, 2 and eventually 5. Awakening is a crazy and wild mind escape that is over way too quickly. Recommended. I would have liked to go to the IMAX for this, but it didn't happen this time around.  It was kind of funny to see an uncredited Wes Bentley show up only to be dropped out of a window and die falling onto a parked car.

I saw the first Underworld and thought it was awful. The second, well that didn't improve my impression of the series. As much as I like werewolves AND vampires and as hot as Beckinsale is, I just can't bring myself to watch this film due to my feelings towards the others.