Guns N' Roses - You Could Be Mine 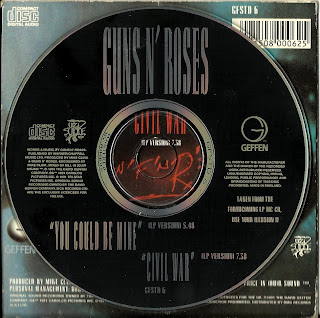 Boy do I love me some Guns N' F'n Roses. What more of a badass pairing than the greatness of this song You Could Be Mine and T2's little punk ass John Connor speeding off on his moto. I found this at a record store that I'd only been to once or twice, and remember grabbing it and letting out an "Ah sweet!" I was probably fifteen at the time and yeah, finding this was pretty sweet. Now, not so much. I'll tell you what's great about this Single. Aside from the Title Track fuckin' rocking, and that the release is Rare: Nothin'. The release I got comes in one of those slim cardboard cases, and man do these things suck balls. Not only do they get scuffed up easily, but the CDs can scratch just by sliding it out. Sure, these problems tend to affect Digipaks and normal CD cases, but these cardboard slips take it to the next level of annoyance. As a novelty, this release is nice to own (and I do love collecting Singles), but take a look at that track list. There are no B-Sides, no Live Tracks, no Extended or Radio Versions, no Nothing. Just two Album Version tracks from Use Your Illusion II that everyone already owns, so what the fuck gives England? Who put you up to this!? This would have been the perfect chance to include the MUSIC VIDEO for the track that hasn't been released uh, Anywhere! (Feel free to correct me on that last part.) At least there would have been no Copyright issue as the movie still is used on the CD, or since it's not made in the US does that matter? I understand that Civil War makes a good choice for the second track since it's about War and that's what T2: Judgment Day is all about... but something else could have been done to avoid this reeking of cheapness. Still, the music is kickass, and the sleeve art is quality. This CD was also released in a Maxi-Slim case which I would have preferred to own. Or even better, this Single was also released as a 7" Vinyl and a 12" Clear Vinyl Picture Disc with Backing Insert. Now that's the real deal, baby. A 12" Picture Disc would look good in the collection. A lot better than this sad little CD Single.
Laid to Unrest by DrunkethWizerd

Email ThisBlogThis!Share to TwitterShare to FacebookShare to Pinterest
What the... Rock, Sounds, Soundtrack