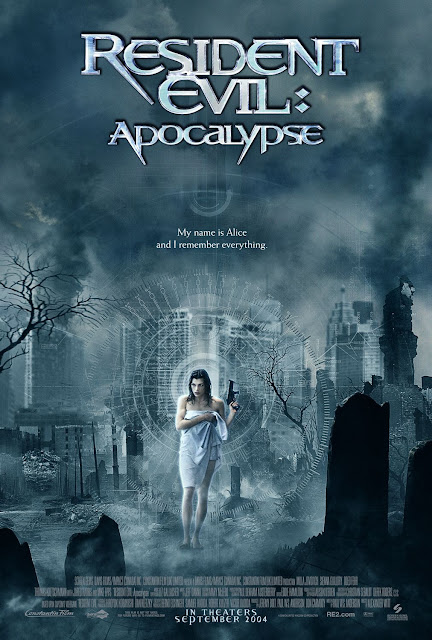 I want you to think about the original 'Teenage Mutant Ninja Turtles' movie for a moment. Released back in 1990, I was just ten years old when I got to see it at the cinema. I remember how awesome I thought it was, but I was young and didn't quite grasp the true reason behind this. Sure, turtles kickin' ass right, what's not awesome about that? As I watched this over the following years, I realized something about it: That it's fuckin' sad, man! The first film was so dark, so utterly depressive, grimy, and yet not to mention spot on perfect. I found a common bond with it as I grew older and became more depressed myself. It's got sort of a captivating aura about it, and that is how TMNT is done right. True to form, spirit and style, even the laughs to be had come off with a sense of closeness between the characters that you can really feel.

Fast-forward one long year later, and to quickly capitalize on the tremendous success of the first film, we're presented with 'TMNT2: The Secret of the Ooze'. That sour churning you feel in your stomach when I bring up this sequel is normal, so don't panic. They took a masterpiece of a film and followed it up with a slapstick frenzy of arseholeness previously unforeseen in such quick form. Sure, the sequel was aimed at a younger audience than the first, but it was dumb as all hell! The first film earned my respect with an honorable portrayal of sewer dwelling humanoid mutant turtles skilled in the ninja martial arts. The second film is as if they were all repeatedly hit over the heads with 2x4s and fed nothing but pizza topped with Crystal Meth. When you're young, it's quotable, but later on only about two or three of those puns are actually funny. I still laugh at the "You take the ugly one! No, you take the ugly one! I'll take the ugly one! Which one's the ugly one?" line, even though you can see it a mile away.

The sequel is IN YOUR FACE to the extreme and rocking mics like foot vandals, and while I can appreciate supreme extra cheese, I will not condone this type of thing. I wasn't aware of the fact that Jill Valentine was the most supremely badass chick on the planet with a supercool annoying attitude and take no prisoners retort. Her introduction in the film is a mix of laugh and sigh inducing, and while I know that she is actually rather badass and annoying, they amplified it to a ridiculous degree. Think Stallone in Cobra when he's first called in; totally bodacious scene. Now, smother it in stinky ass cheese and put it in a short skirt. Kind of a turn off, right? I like a strong female lead, and I guess since she's got to compete with Alice they had to up the ante or something so it's a wee bit understandable I suppose. Unless you take into account the introductions of the other characters as well. What's with the Carlos intro scene? Girl's already been bit, surrounded by twenty-two zombies on a rooftop and he decides to order the chopper back so he can f'n zip line into the chaos and waste time! That's a really nice and extremely dumb thing to do, bravo.

And I guess it should be considered flattering that this new director decided to take scenes straight from the game and film them in live action. Say what you will, it's better than putting actual video game footage into the film... but, it really doesn't make up for the lack of Anderson's visual expertise. Even though he wrote the 'script', I can only imagine if he had directed all four films. Meh, I'm sure it'll grow on me with repeat viewings. I just don't really appreciate the style they went with this time, nor some of the visual effects. For instance, when the zombies first appear it's done in blurry vision. And not even good blurry vision, choppy shitty looking bullshit. When we first get a glance of Nemesis, they try not to show too much by keeping it a side shot, but show way too much of the side shot in the process. And not that I enjoy nitpicking, but why in the fuck are all the soldiers wearing black motorcycle helmets? Where are their motorcycles? Probably in the Umbrella shop getting some sweet airbrushed Licker artwork done or some shit. That'd be sweet!

Things I liked, uhhh... well, I love graveyards and that graveyard scene was satisfying. There were topless zombie stripper chicks. When Alice ran down that building it looked pretty cool for the most part, you could see right through it, but it was a cool scene. Nemesis looked better than I thought he would, which is important to a film without depth. He may not have been shot properly at all times, but the make-up was done right. The Lickers were spectacular looking! I was slightly blown away when they came onscreen actually. They were completely CGI this time around but I think they nailed it. At least, in comparison to the real life actors who added the Canadian bacon to this big ol' slice of Hawaiian.

Would it kill these filmmakers to show a little subtlety though? It's not 1993 anymore. 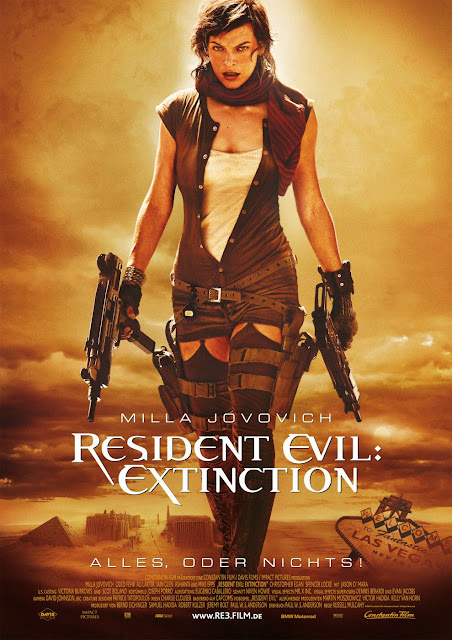 And then the ninja turtles went back in time to Japan. I guess something different had to be done, like oh I don't know... say for instance, taking Resident Evil into the f'n Desert!? Yeah. I'm just glad all the fun characters from the last film are back: LJ the funny pimp, Carlos the Mummy Slayer, Jill the volcano on legs and, wait... oh right, Claire is in this one and Jill has mysteriously vanished yet nobody really mentions it that much. Oh well, Otto the bus driver to the stoner rescue! And what's this, well hello K-Mart you hot little slice of jail-bait clearance sushi. Me like K-Mart. Want to shop in isle of unmentionables. Speak over intercom devoted love for her. Claire is nice too, but I guess like all of the other introductions aside from Alice's, everyone get the small slice from the pie. Alice does however get slapped with the anchovies when they take scenes directly from the first film to start off her clone's actions. They couldn't even re-film that and make it at least a little bit different?

Like Apocalypse, Extinction features a bit of redundancy with footage from the previous film. It's a trend with these sequels though, so no point in focusing on it. There are after all, more important things to worry about. The Wesker character is not only squandered here, but the actor portraying him doesn't fit the bill at all. His scenes and vocal actions come off as lame and uninspired. He should have been more imposing, with a low toned yet menacing soundtrack, while calm and calculated looking. Here, he's just kind of there and I wasn't feeling it. I don't think anybody was feeling it, especially not the actor playing him. True, a character such as Wesker is indeed difficult to get right, which is why it took a mix of acting and computer generated graphics to make him come so alive in RE5. In Extinction he's not so much animated, and definitely could have done with an injection needle full of juice to get things heated up. He's really only at board meetings in this film via hologram, so there's not much to be expected, but a little more effort could have created a more interesting outcome. Even if it meant holographic flickering, however cheap that may be.

At least throw in a little more shitty CGI if you're going to fill the rest of the film with it. I can't imagine how they'd end up dropping the quality of CG from the first sequel with not much money spent on sets. They're in the desert most the time and yet the CG in this film is substantially worse than the previous. Why? Was all the money for Apocalypse spent on the substandard sets and that's why everything else was shit? Did all the money on Extinction go to rebuilding the mansion set from the first film only for them to re-use the footage from the first film? Hmm... with the seemingly large budget of both sequels, there seems to be a lot of issues on where to put the money. Really, that swirling fire in the sky taking out all of the infected crows looked like utter crap. And the final boss "Tyrant", while he got a good two film build up as a human, just plain dropped the rotten eggs when his CGI Costume mix hit the scene. Despite the work put into this third RE film, I find it to be all a bit lackluster.

Costume design and the aforementioned sets were all well done. The director this time around was a bit more faithful to the original settings. Camerawork and the look of many shots are professionally done, and the flow of the film doesn't reek of abruptness. In the extras they say that they didn't want "some kid that had done nothing but music videos" to direct this. This dude did some Highlander and Razorback, but pretty much all else is music videos so I don't know why they would say what they did. Sure, he's not a "kid" anymore, but their statements seem unwarranted and strange considering the amount of music video work he's done. At least the visual style was more in line with the first film, making the second now seem like some renegade disaster on wheels. Now that I think about it, after seeing this one I may just go back to the second and give that trashy darling another chance at redemption.

Oh yeah, I almost forgot: What's with the random and senseless airbrushing on Milla's face, and ONLY her face in certain scenes? Not only is that distracting as fuck, but also a worthless act of violence against mine eyes. I read that this was done before the prints even hit the cinemas so don't worry about your copy at home, no matter what format. I don't know what they were "going for" or if they were going for anything when they did this, or maybe they're simply idiots, but the effect is garbage and those responsible should be punishingly stuck up the arse with the T-Virus.

I've always been a supporter of all that is Milla. She is on every level talented and beautiful. This series, as it stands right now with limited fan appreciation and continued outrage over rape of the game title's stories and themes, would surely have been put to rest long ago without her. Things were done right here and there, but the peculiar thing about it all is, that even though it began all wrong, it seems that everything can be tied back together. Sure, there will be a malformed scar with ravaged tissue, but you know the thing about scars? They're sexy!