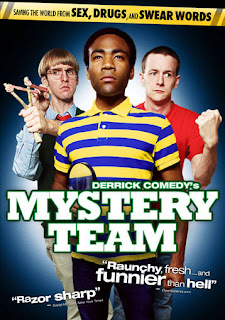 There were three major things that got me interested in seeing the film Mystery Team. For one, I like mysteries and two, young adults that still act as if they're seven years old is a pretty damn funny occurance if you ask me. The third, is that I had just seen a short film online from these guys DerrickComedy, about BRO RAPE. Now, I at the time really wasn't aware on what a "bro" was since I don't get out much, but I now know that they are indeed popped-collared douchebag magnets of rapeage. The video not only scarred me for life in a good way, but it also did so with delightful glee as it is indeed pure fucking hilarity. Here's how it goes down: Two guys abruptly enter a dorm room and one of them is, I believe to be, a bro. There is a fiesta to be had nearby very soon, and darker dude says to this particular bro that he should proceed to chug a bottle of scotch "before anyone sees it" and that this party is "going to rock". He then spits into his palm and violates the poor screaming lad up the arse.

So I looked up the trailer, found the coming soon date, checked around for the release and finally rented it at the ol' Redbox. I recall after first viewing the trailer online, I said to myself, "This looks like a stupid ass movie! But I can't take this shit no more... I gotta see it." It's about three young lads who form a mystery team and go around the town solving crimes like missing cats and who stole little Cindy Loo's diary, shit like that. Only fifteen years later, they're still sipping chocolate milk out of swirly straws and gee whizzing about town on their bicycles looking to solve the latest caper. It's not until a young girl's parents are murdered that they get their big break, and have to do some growing up.

Mystery Team is indeed a rather purposeful film. It's purposely childish, absurd and a little bit deadpan jokey, but there are some remarkable fits of greatness thrown in. I'm going to go ahead and "admit" now that I was drinking as I viewed this one, not that it's any different from any other post on the list. Mystery Team started off a bit slow, with a few corny jokes tossed about, but the more I drank, and the more the film progressed, it got way better than I thought it was going to be. I'm not saying that there was a direct correlation between the two things, but I know for a fact that alcohol was not the deciding factor in making this a fun film to watch.

I'm not saying watch it sober, no no no... far from it, I highly recommend you watch it while chugging shots and chasing 'em with ramen noodle broth. As a first time effort I can say that I'm proud of what these bro's have done. A couple of the jokes repeated once or twice early on, and it seemed strange, but it was all a setup that worked later when the third act kicked in. Like a roller coaster, the first half of the movie slowly builds up and the second half is just all free-fall non-stop flying out of your seat about to die awesomeness. I read about two or three very short negative "reviews" on Mystery Team and they all quit after the first ten minutes of watching. Those people can go ahead and lick vast amounts of ballage, because they obviously lost out on the deal.

No matter what I read, everybody seems to agree that Donald Glover is the f'n man. True to da dat! He be. I know it probably sucks when your comedy team of five or six are all good, talented individuals, but people mostly talk about DG. I think they're all awesome persons, but Glover is just fuckin' superb! Cast himself perfectly as the "master of disguise", and he really nailed it... still, nobody is anybody without the backup. So I hope DerrickComedy keep it up and get another one of these stupid as all hell films out. If it means I gotta see you three walking through the Gentleman's Club with severe hard-ons, reaching into shit and needle-filled toilets filled by prostitutes, or even being slapped in the back of the neck by juicy ice-cream sandwiches of love... then so be it.

Email ThisBlogThis!Share to TwitterShare to FacebookShare to Pinterest
What the... Bad Comedy, Film Review, Independent, Movies

Totally agree! Donald Glover was hilarious in this!