Check out this kick-ass jacket I got for the "holiday season" from a sweet little lady (and purchased at Old Navy of all places!). I've been there like one and less-than-a-half of times and it just isn't for me. I get embarrassed just stepping foot inside the building based on the bullshit they sell. So imagine that, the fact that this sweet-ass coat came from their warehouse. Weird. But it's nice. 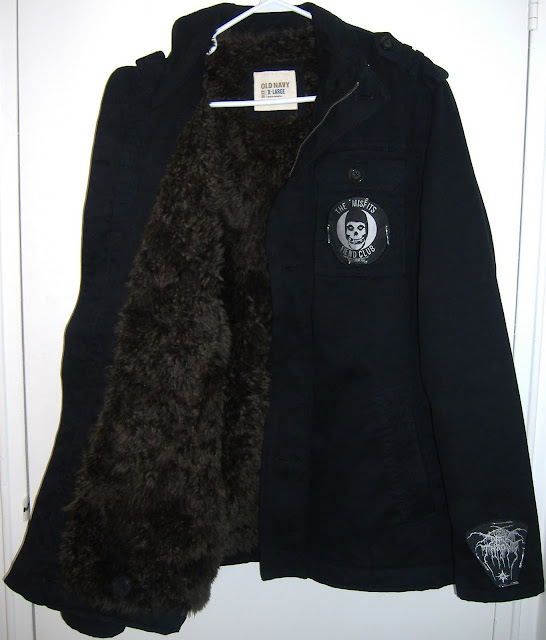 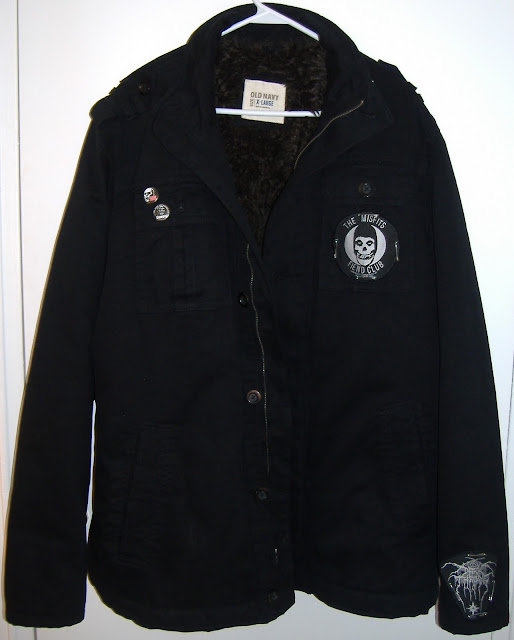 Here's a detail of the two buttons I've got on this one. Now I own two of the Zombie pins. I just said "what the hell" as I got the second one. Why the fuck not? Never enough Fulci! I don't think I'll be adding more patches to this one. I need something more subtle that doesn't reflect my male peacock-ness.

I also got two pajama pants. Both from Joe Boxer. One was thin with smiley-skull and crossbones (joker type stuff). The other was thick and fuzzy with real looking skull graphics (which means I guess they know that I'm deadly serious).

Email ThisBlogThis!Share to TwitterShare to FacebookShare to Pinterest
What the... Clothes, Horror, Metal, Patches

I feel the same way about certain stores, Old Navy included. But that furry bitch looks like it'll keep your cold heart good and warm during the cold New England winter.

And you're right, you can never have enough Fulci.

Cool coat, man. Where'd you score the Fulci pin? Like to pick a couple of those up.

I got my first Zombie pin from http://www.houseofmysterioussecrets.com/ ...it's listed under "weird stuff". The second one from Newbury Comics.

That's actually a pretty sweet coat. I'll have to someday post photos of my coat since its decked out in patches and what not.