Bronson from Street Trash is apparently Alive and kicking some f’n ass! How he survived that flying canister to the lump above his shoulders is beyond me, but by the looks of it he’s cleaned up a little bit. His clothes are washed, his beard (though now gray due to aging) is nicely groomed, and he’s wearing a sweet-arse shirt that reads: “I am a Motherfucker” on the back. But while his style may have somewhat improved (total matter of opinion there), he’s still a psycho Vietnam flashback havin’ bastard and it looks to me that he’s carrying a sharpened femur bone in that fanny pack of his! 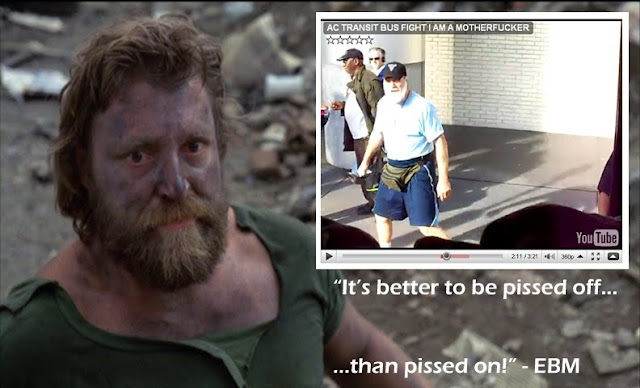 “Out-fucking-standing Chow Man!!” Now 67 years of age and after upgrading from walking and stomping to riding public transportation, he seems a bit more peaceful than his previous junkyard days. But that peacefulness isn’t something that he can easily control… what with the lingering dementia and such… so when a jive ass mofo gets smart with his mouth, ol’ Epic here lays down the law – Street Trash style. Even commenting on how it’s better to be “pissed off, than on” I’d say we’ve got a solid open and shut case here. Just listen to the way he screams the words “I TOLD YOU NOT TO FUCK WITH ME!” at exactly 1:51. One Fifty One… ain’t that some shit, let me know. That’s the fuckin’ Viper, baby! 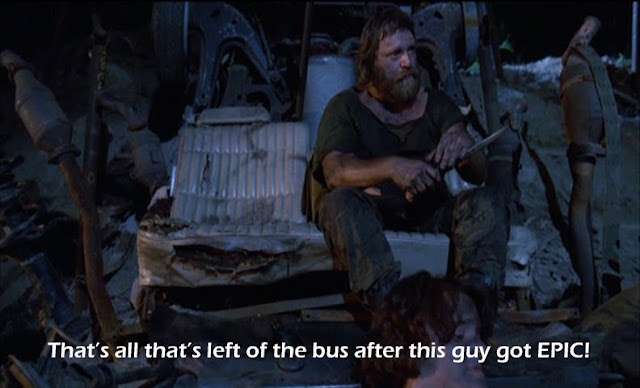 Muhammad Ali ain’t got shit on the pounding Bronson gives this straight up G. “You bitch! You never defile me that way in front of the men!”

Let it be known here and now, that Epic Beard Man (and his minions - yes, he has minions... and they're all old as shit too, but strong as fuck) is the guy all shit-talkers should fear. Lesson learned is keep your fuckin' mouth shut on the bus you punk ass bitches! Or it's gonna' be opened for ya'... and then you'll be spit-shining someone's velcro sneakers with your blood. An old ass dude can't even go to his mum's funeral these days without someone talkin' shit and threatening him with a knife?

No. He's no "hero"... not in the traditional sense. Heroes help people. This guy just helps people to believe… and what people believe, that’s their own business. Everyone’s got an opinion from “Racist Comments” to “Don’t Mess with the Elderly” to “1st Post! Dur!”… Check out EPIC Beard Man @: Know Your Meme.

Email ThisBlogThis!Share to TwitterShare to FacebookShare to Pinterest
What the... Epic Beard Man, Teh Internet