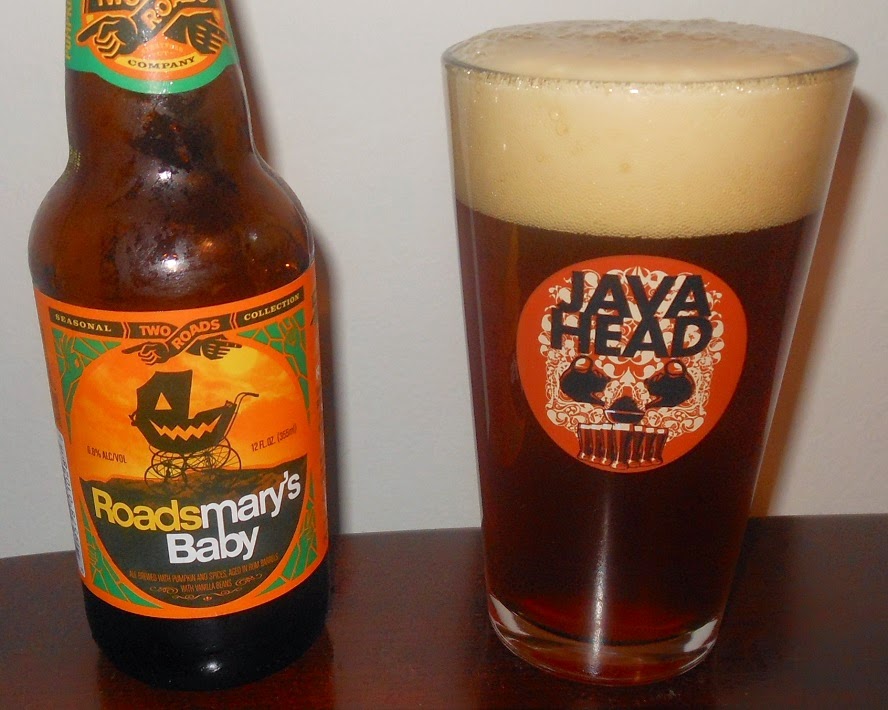 About: "Roadsmary’s Baby is a traditional pumpkin ale with a Two Roads spin, it's aged in rum barrels for added complexity and depth of flavor. The result is a smooth drinking ale with notes of pumpkin, spices, vanilla, oak and a touch of rum."

Thoughts: This beer smells pretty damn good. Consider me impressed. For being aged in rum barrels with vanilla beans, that portion of it isn't as strong as I would have hoped, but nonetheless it brings out a beautiful characteristic in this one. It's not on par with the sugar-loaded Pumking, but man does this one really smell like freshly baked pumpkin pie with whipped cream on top and a scoop of french vanilla ice cream on the side. It's good stuff man. You can tell while taking long whiffs that there's an underlying bitterness here, but up front it's sweet, spiced and indulgent.

Loaded with clean and complimentary malts to those pumpkin spices, Roadsmary's Baby comes off fresh and fun. Though while a fun beer, it's not horribly exciting. It's got a tingle to it both from carbonation and spices, a real low level remnants of rum in the background, and a nice flow of vanilla that runs through after each gulp. I'm just going to go ahead and say that it's the vanilla beans that really make this one. All the components are of course brought together gloriously here, from the raw slightly sweet pumpkin to the choice of ingredients and then the aging. I do wonder how long this was aged however, since it's not all that strong.

While incredibly smooth and great tasting, this is just a tad uneventful. It's a bit monotonous. I guess that's not really a bad thing considering how nice this beer is, so just consider that a minor complaint. This beer is actually like a version of Rumpkin, you know, if it were a baby. The evil shit that this could turn into if it were amped up with booze. Overall this is a very approachable barrel aged pumpkin beer that even people who aren't fans of barrel aged or pumpkin beers would probably like, but I don't think there are people like that who exist in the world.

Email ThisBlogThis!Share to TwitterShare to FacebookShare to Pinterest
What the... Pumpkin Beer, Two Roads

I actually discovered on the website that there is a stronger, less filtered and 2 months longer barrel aged version of this beer that Two Roads makes... unfortunately I didn't find it today on my big beer run. So maybe next year, if it's actually bottled and not just a brewpub thing, I have no idea. But just knowing it exists, makes me wish I could have done both at the same time.

I was impressed by this beer too, but then again I've been impressed by every Two Roads brew I've tried so far. The relatively low ABV% for a barrel aged beer caught my eye, especially compared to something like Avery's Rumpkin. But yeah, it's a really nice pumpkin beer with some unique qualities.

Speaking of barrel aged pumpkin ales, I was lucky enough to find Anderson Valley's Barrel Aged Fall Hornin' on tap. At only 6% ABV, it packs in some serious bourbon flavor. It's a sipper for sure, and that's a good thing since new flavors come out as it warms up. I think it's keg only, but it's worth a try if you come across it.

If I ever see it, I will. I've only tried two or three Anderson Valley brews, but I remember liking them. Especially that summer cream ale.