I've been looking for HoptimuM, not too long now, but for what seems like an eternity in my brain - to the point where even typing this now it feels as if I had been destined to do so. Then I find it not one minute away at the liquor store up the hill. Oh, somebody was trying to hide it quite well. Maybe until they could scrape enough dough to buy the other three from the four pack. But I'm the defective detective motherfucker and I sniff out then snuff out beers like this! In other words, I took it upon myself to buy that three pack and the four pack next to it, on the spot. All the while gloating over the imaginary gentleman that attempted to hide this treasure from me. The fuck you think you are Mr. Buy one bottle now and hide the rest!? For shame. 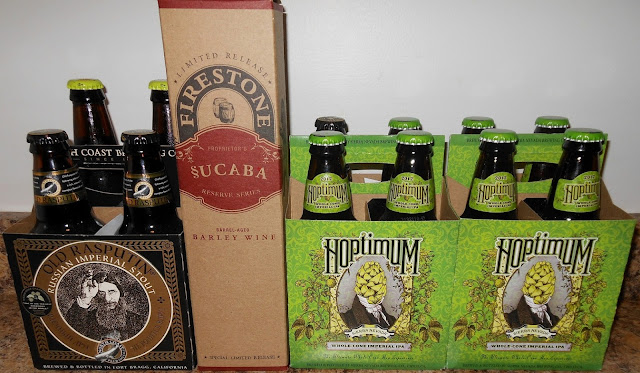 Alright, so what we got here from Right to Left is a Four Pack of Sierra Nevada HoptimuM, three more bottles and a bottle of Old Rasputin, Firestone's Sucaba Barrel-Aged Barley Wine and a four pack containing two more bottles of Old Rasputin (I drank the fourth bottle before checkout) and two bottles of Dogfish Head World Wide Stout. A beautiful sight, if I may say so myself. -_-

Great haul! Haven't tried Abacus yet, but the others are very good. I love the packaging on the Firestone's specialty beers. Very classy. Got a bottle of Parabola aging.

Hey, you're alive! I thought the cannibalistic zombies got ya.

They did, now I'm one of them.