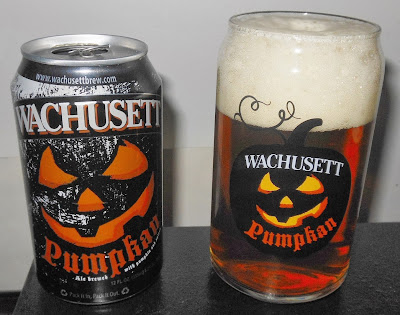 About: "Wachusett Brewing Company is releasing their newest beer, Pumpkan Ale. With the recent installment of the canning line, this will be the third aluminum packaged product added to the portfolio. Pumpkan is a session amber ale with a 5.2% ABV and 20 IBUs. The use of Two Row, Cara Crystal Wheat and Caramunich malts create a perfect balance to the pumpkin puree and Blonde Belgian Candi Sugar. The combination creates a deep orange color with the subtle spice flavors of cinnamon and nutmeg." 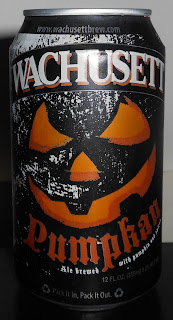 Thoughts: From a visual standpoint, this is a really nice looking beer. The color is rich and deep, and the frosty white head topping the brew is dense and frothy.

The scent is very crisp, but unfortunately light and subtleties are not my best area. It smells of mashed and cooked pumpkin along with malts but that's about it. The spices don't come out all that much.

Taste is bitter. Spice is light. Spice does not linger. It's watery. Spice is soft and overpowered by the bitterness. Definitely not sweet enough. It's very earthy, leafy, kinda dirty and grassy. A little peppery. Little bit sour, not horrible but way more sour than I usually like, especially in a pumpkin beer. Needs to be sweeter. Could use a little brown sugar, more cinnamon and less of those grassy hops. Otherwise it's decent and there's nothing wrong with it. It's a standard pumpkin ale and that was their downfall perhaps, after producing a very above average Imperial Pumpkin Ale on their first try.

The initial rush of natural pumpkin, however light it is, is good but it falls flat really fast. An unfortunately weak offering. I wonder how much Belgian Candi Sugar was used in this... a teaspoon? Or does it being of the "Blonde" variety have something to do with it? It's pretty abysmal in terms of the letdown. Still better than Pumpkinhead though, and again, that ain't sayin' much.

I read the press release for this beer before it came out and I was really looking forward to it. After all, just take a fucking look at that can design. It's awesome!! Not only that, but last year I had Wachusett's Imperial Pumpkin Ale (which was their first bottling of the product) and it downright blew me away. I found it comparable to Pumking (in terms of quality), though very different, and graded these beers similarly.

Am I being too hard on this perhaps because I was looking forward to it so much? It's better to not get psyched about a beer you haven't tried before, I know, but I was fairly confident that this would have been a lot better. Meh. I ended up using most of the cans as chasers, and in that particular requirement, this beer served its purpose quite well.