About: "Imperial Porter is a full bodied, very dark, malty beer with a good roasted character coming from the Crystal, Chocolate and Black Patent Malts used in the mash. Warrior, English Fuggles, and East Kent Goldings Hops balance the malts with a good hop bite. The beer has an OG of 1.070, rounding out after fermentation with just a slight residual sweetness and cutting dry at the finish." 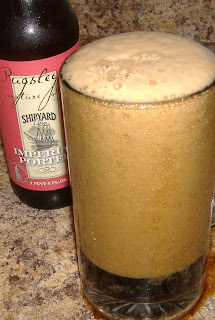 Thoughts: Poured a super dark near black with a seven inch tan fluffy head that exploded violently out of the large mug! What the fuck!! Whoa... this thing is all head. The package store just moved these from the shelf into the cooler, and I don't know if the guy shook each one up beforehand just for shits and giggles or what. I poured it lightly into a tilted glass about halfway up and the foam just seemed to unexpectedly expand and triple in size. Then I let it calm for a while so I could finally get all the brew into one single glass. I just hope it doesn't explode in my gut and I start foaming at the mouth!

Smells very rich and hearty. Yep, this is dinner. Smells more chocolately than anything else. Major malts... after the way this one poured I'd say that it fits the definition of a Malt Bomb. Ha Ha Wow. I kill me!

Coffee, dark fruit and after swallowing and breathing in, a light amount of booze. It's got a very roasted flavor that lasts throughout every sip, every gulp and even in the aftertaste. After a short while, say about half-way through, the hops start to linger around the back of the tongue. It's got a really grassy undertone to it as if you licked the ground at the old park's football field (not that AstroTurf shit). Yeah, there's a little funk going on there. Hidden by the extreme malt of course, and it probably would have been masked by high alcohol if this one had a stronger presence. It doesn't though. The little bit of booze is fading into the backdrop quite rapidly.

The small head that's on the brew now, even as I drink it, never fades away until the very end. That's cool. This one is thick, and heavy... but my throat feels very dry once it's gone.

I'm going to say that this is my least favorite out of the whole Shipyard Imperial series that I've tried thus far (five of them). This one is a little funkier than the rest. It's just not terribly exciting when all is said and drunk. Not counting the explosion of course. I'm not really much for Porters anyhow, but I'm not disappointed by this really. Simply not impressed. It's OK. In fact, the whole series of Shipyard Imperials has been pretty good to me I'd say. I hope they come out with something new in this line actually.

About: "XXXX IPA is a non-traditional American IPA with a brilliant copper color and the classic citrus nose of Cascade hops. This beer demonstrates a unique balance of malt-inspired, delicate red grapefruit sweetness and lingering hop dryness. Cascade, Warrior, Summit and Glacier hops are used for bittering and Cascade hops are added for dry hopping after fermentation. This hop blend is well balanced with malted wheat, pale ale, crystal, and caramel malts. To full enjoy all the flavors, this ale is best drunk at 55 degrees Fahrenheit. This beer pairs well with Cajun dishes, blackened fish, and BBQ." 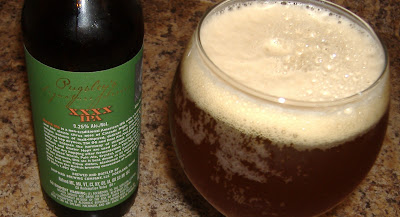 Thoughts: Poured a fairly dark golden amber with the usual Shipyard bubble clusters that cling to the side of the glass. The foamy light tan head dissipated quickly as expected.

Got a huge whiff of strong citrus as I was pouring this. Seriously hoppy with a lingering grapefruit tone. As I lean in for the second time, there's some major malt coming through. Almost a little bit like a stout, but not quite. It's strong malt but very light chocolate tone.

Taste is a little hoppy, then really malty, then really hoppy. Interesting! Medium alcohol vapor after the second gulp when I breathed in. Some dark fruits, kinda like plum, floating around. Little bit like a rum fruit cake. It's a wee bit bitter, but really sweet and savory at the same time.

A little watery, smooth, goes in with a fizz, leaves a tingle on the tongue, and a slightly bitter mini-bite at the end.

I really liked this one. It was smooth and great tasting but didn't supremely impress me in any major way. It's definitely worth the cash, but with so many other brews out there that I haven't even tried yet, I'm not bound to go buy this one again unless there's some special deal or it's been a few years and I start over.

So far I've quite liked every Shipyard brew that I've tried (aside from Pumpkinhead unfortunately). Though, all of the other brews of theirs I've tried have been Imperials, and I have found myself most partial to the taste and feel (and after-feel) of Imperials. Their high gravity specialty brews have not disappointed me, not once! I'm hoping to round out all of their other brews before trying pumpkinhead once more for the third time next year. Maybe.

About: "A big beer made with six different malts: Pale Ale, Crystal, Caramunich, Wheat, Chocolate and Roasted Barley, and balanced with a very full hop charge of Summit, Challenger and Fuggles. With a complex fruity nose, a very full body, it's an interesting balance between grains and hops which ends with a pleasing dry taste. Best drunk at 55 degrees Fahrenheit." 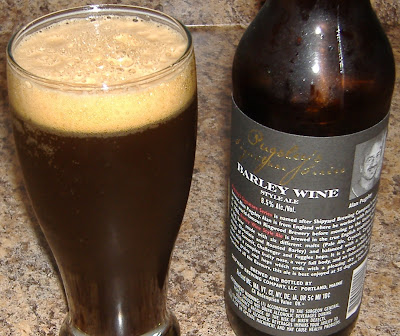 Thoughts: Beautiful looking label with a round gold sticker with a white star that reads "Cellar Aged". It's got that nice gold foil that I like about this series.

Poured a rich mahogany color with a short, tan head that left some clouds in the beers top.

So sweet. Smells like a sweet, malty chocolate milkshake with cherry flavored whipped cream topping. It's a little wheaty, and there's a hint of roasted coffee, but the chocolate malt is the predominating factor.

Prunes. Dates. Raisins. Essence of dark fruits. Smokey wheat engulfs. Very strong, and well balanced hops and malts. A slight alcohol tinge permeates throughout the mouth. After swallowing there's an instant sweet tingle.  There's no real harshness to it, but a little bit of a grassy after bite. It's really like a candy for adults. Goes down smooth. There's a slightly dry, crisp bitterness to the finish. It's full, not too foamy or frothy, but it becomes so when sneaking back up.

This one isn't overly intense, in fact, it's pretty subdued for something of its kind. Drinkability is off the charts. This is some very dangerous stuff. Just the way I like it. So far I haven't met a Barleywine that I didn't like. I'd say that Shipyard scored again with this one. Their 22oz Bombers have so far all been excellent (there are some I haven't tried yet). The price is just right, the content is totally worthwhile, it's fairly strong stuff, and it comes in a pretty bottle. What's not to like? Final: I'm not completely 100% blown away, but I went away a very happy man.

Someone definitely shook that fucker up, unless it was too warm when you poured it. I've had that happen with warm beers.

I actually saw this one at the distributor on Saturday, but passed on it. Had my arms not been full of beer, I may have considered it. Then again Shipyard isn't exactly one of my favorite breweries.

Well I got this one to finish off my Shipyard Imperial series. Not that they're my favorite, but I kinda like em.

I just figured since it's an imperial porter that you might have wanted it a bit on the warmer side, like a stout. But it doesn't sound like anything you did would have caused that to happen. Weird.

I've poured a lot of brew into this mug so I don't know what's up, but another bottle I got from the same place (and it had been moved from stack to shelf - though it wasn't nearly in the store for more than a month) and it started to aggressively foam up. Maybe I'll walk into the place next time rollin' dice around in my pocket!