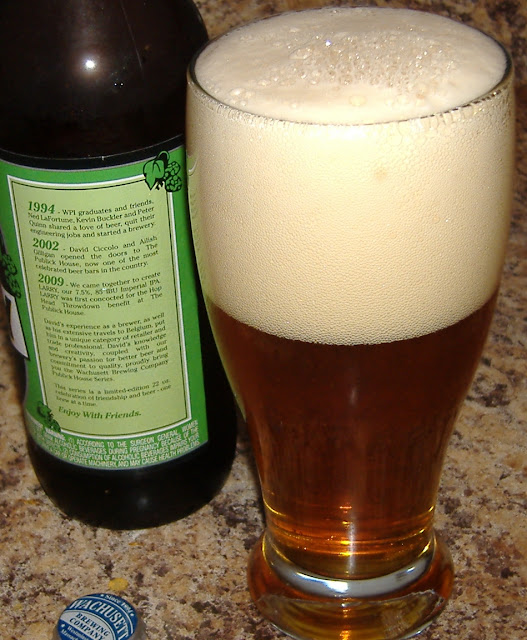 "A Drinkable Imperial. We teamed up with our friends at the Publick House to create this 7.5% ABV, 85 IBU India Pale Ale, so you can enjoy it with yours. Amarillo, Chinook, Simcoe, Magnum, Centennial hops, American Two Row, Crystal and Munich Malts."

Thoughs: Poured a bright orange, with a bit of a yellow amber hue in the light. Huge white puffy head that must have stolen all the carbonation away. There's only a few bubbles in there halfway up, and rising every few seconds.

The smell is serious hops! Little piney, little floral, little grassy and all very sweet smelling. Like mandarin oranges. By definition, this is what an Imperial IPA should smell like. It's absolutely gorgeous! I'm ashamed to have held off so long. As I re-read this I notice it's taken me about seven minutes before I actually tasted it. It just smells so good.

These must be my favorite hops. All of them. Right here. Little bits of burnt buscuit malt fade in, followed by a mild spice on the tongue that later turns to a grassy after tone. Citrus hops bounce around the tongue upon breathing in. The spice gets a little stronger as it warms, but it's fast attacking and doesn't linger. Little bitter, little sweet, little girl I want to eat. The alcohol content, though not incredibly high, is super hidden too... just like the bodies in my basement.

It's quite a bit thick and creamy. Tastes so good that it just flows down. This brew doesn't retreat on you, either. It's sticking around. Is that what they call "syrupy"?

I can't really find any downside to this brew. It smells good, it tastes good, it feels good. Their site addresses this brew as a "drinkable imperial". Well, it's definitely that, and also a drinkable IPA as well. Very drinkable actually. Just smelling and tasting this reminds me of when I was a kid... ya know? Don't get me wrong, I wasn't drinking this out of my baby bottle or mum's tit (I don't think!?). No, I think about how when I was younger and I would smell a beer like this and hold back. I did not know then what I know now. Hey, give me some credit though, I was only five at the time.

"Larry", you are one exceptional brew!