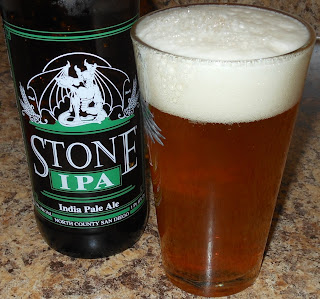 About: "You'll find our Stone India Pale Ale to be true to style with a huge hop aroma, flavor and bitterness throughout. If you're a hop-head like us, then you'll love our Stone India Pale Ale! Medium malt character with a heavy dose of over the top hops! Generous "dry hopping" gives this beer its abundant hop aroma and crisp hop flavor. Hop Variety: Columbus, Chinook and Centennial."

Thoughts: Stone IPA poured a light yellowish golden hue and featured a huge white head that built slow and showed not a single sign of going anywhere. The brew is slightly hazy and there's a nice amount of carbonation rising up. Looking at the bottle before opening it I notice a lot of sediment on the bottom, I'll be pouring that in later.

As I poured it I immediately got hit with a huge pungent smack! I gave it a minute after pouring it in the glass and then leaned in cautiously. Alright, I'm getting a lot of citrus hops and some pine. It smells slightly sweet, but I've got a feeling it's not going to taste sweet at all.

Gentle bitterness, little bit soapy... spicy, hints of ginger on orange chicken, and there's a heavy haze of grassy grapefruit. That's about it. Doesn't taste boring, but it's not terribly exciting. For their standard IPA, it's decent start for anyone looking to try one of their brews. To me though, it feels as it it's missing a special something. It's not nearly indulgent enough. Then again, I'm a triple IPA kind of guy now so it's hard going back to the standards.

Mouth feel is very frothy, bubbly and fades smoothly as you swallow it.

Alright, pouring the rest with the junk at the bottom: Result is a slightly more flavorful brew, and a bit more balanced, if that's possible. Not sure how it happened either, but it's a lot smoother as well. This beer is fairly inoffensive, and wait, what happened at the end... that sweetness that I never thought I'd taste? There it is. Minimal as it is, there's a candy coated finish on the bomber. This is most likely the first and last time I'll ever buy this... but it'll help give me some perspective on some of Stone's other beers which I'm soon to try out, and for a lonely couple of them, revisit. 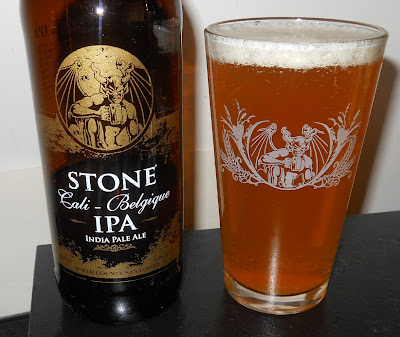 About: "When reading the name "Stone Cali-Belgique IPA", "Cali" hints that it is a California-style IPA, and this brew has an undeniable Belgian influence, indicated by the word "Belgique" (which is how Belgium's French-speaking population says the word "Belgian"; the Dutch-speaking Belgians say "België"). We carefully selected a Belgian yeast strain that illuminates a fascinating new aspect of the beer that is otherwise quite simply Stone IPA. The result is both completely new and different, while still being recognizable as a Stone brew - and Stone IPA in particular. Think of it as an otherwise identical twin to Stone IPA that was raised in a Belgian culture. Literally. HOP VARIETY: Columbus, Chinook and Centennial"

Thoughts: Purchased and drank on 1/22/13 with an Enjoy by date of 2/22/13. Loud hiss on the cap. Poured a golden yellow color with a shade of orange in there, and a smaller than expected white head that fizzled down into four puddles and a foamy ring around the glass.

Smells a little bit light. It's not as hop forward as their regular IPA, but it still smells really sweet and the addition of Belgian yeast is very harmonious. Getting a lot of peppery spice and everything seems to be flowing smoothly. It gets pretty dank after a while too. While this brew does have a solid scent to it, it's not really popping too much.

The taste is really gentle with tons of sweetness up front and then a heavy bitterness that builds up rapidly. There's a lot of citrus here, mostly lemon, maybe some tangerine, but also a bit of grapefruit on the end of it. There's no sting to the beer, but there is a mellow buzzing to it which is enjoyable and fun. It's pretty cool how it starts out really sweet but then the bitterness hits and gives it a nice balance of flavors.

Basically this is a really affordable beer that was made well and tastes pretty good for a different version on their standard, less celebrated beer. While it's an interesting take on their IPA, it's nothing truly remarkable (when compared to their better offerings I mean). It tastes really good overall, and I can't complain as it's all enjoyable.

This is a really laid back and relaxed beer, very reminiscent of the beach bum California lifestyle... but with a little twist.

Email ThisBlogThis!Share to TwitterShare to FacebookShare to Pinterest
What the... Belgian IPA, California Beer, IPA, Stone