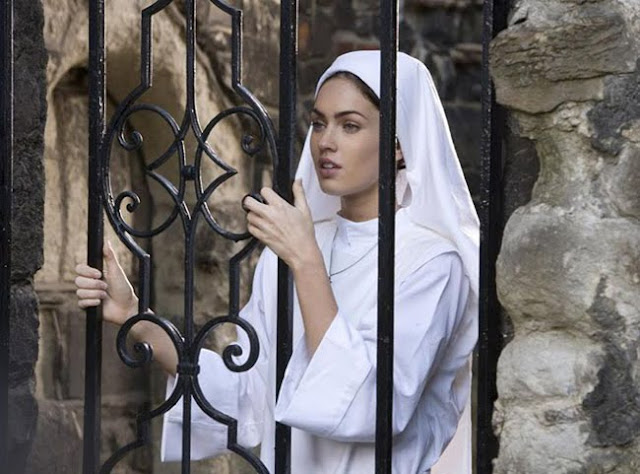 I don't know if it's the deep rooted apathy talking, or perhaps I just can't conjure up enough energy to do anything more than simply sigh at the thought of Megan Fox not being in Transformers 3, but alas it is still on my mind this morning. I've been thinking it over for about a day now, and can honestly say that I'm against it. Then again, I was against how Bay and Co went about making the first film (so damn shitty)... and how they squandered the possibilities of the second (The Fallen? Really?)... oh, and how human characters were put above the Bots, given more screen time, and how their screen time was used for mostly inane bullshit that nobody gives a fuck about. Then of course, there's Megan, who should by all means be a simple side character whom nobody would really care if she were in the next film or not. She at least had my attention when all the stupid human drama was going down. What do we got now? Patrick Dempsey? Wait, that's a dude! I can see it now, "Shit just got real... gay, that is." Rumors are going around about who's going to "replace" her for the part, but I couldn't care less who it is since I don't even care for the storyline enough to support it. For the sake of continuity however, I'd like to see Michael Bay and the company just get over it all. Oh but it might just have been Megan's decision to leave. Right.

I know what this is all about, she didn't f'n want to use any of that fake tan in a can shit anymore for the films and Bay blew a gasket! Being compared to Hitler one can get over easily, but this!? I don't think it's about any of the dumb shit that Megan said in the "press". After all, it's the new fad for young dumb full of ramen girls to say stupid things for attention. Just look at Ke$ha, not that I wanted to but I read two interviews with her and my brain nearly shut down. Same thing with Megan. I just disregard about 99% of what she ever says, preferring to listen to the voices inside my head while admiring her beauty. Meh. I guess it's because she's the only human character in the films I really cared to look at which is why I've got that bitter taste in my mouth. I'll still see the third film, knowingly beforehand even that it will most definitely suck. This time however, her acting won't be part of the blame. Still, there's more Megan to be had with the new Jonah Hex flick. Oh, and bring on Fathom, FFS! That is the perfect role for her and the time is now, futhermuckers! Imagine all the wet. This has been today's edition of the fake news. (Above is a picture of Megan as Mother Theresa. Another role, I find her fit perfectly for... so hot... so damn hot...)

Email ThisBlogThis!Share to TwitterShare to FacebookShare to Pinterest
What the... Babes, Megan Fox, Movies, Naughty Nuns, The Devil, Transformers

Megan Fox as Mother Theresa? What? Where?

I'm glad she left TRANSFORMERS and knew it was coming ever since her Hitler remarks that she made to the press. I think my hatred for her all this time had to do with the fact that she was in those awful TRANSFORMERS movies more than anything, so now that she finally said "fuck the money" and quit, I might even go so far as to consider myself a fan of hers now. Well, I don't know about THAT, but you know what I mean.

It's a fake trailer from the film "How to lose friends..." where she plays a nun. A hot nun.