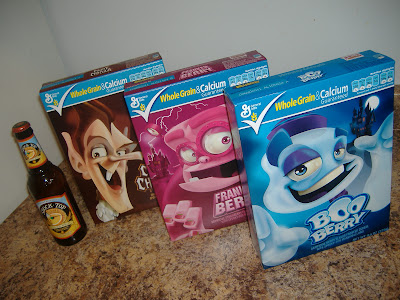 It's true, Strange Kids Club and Eat the deaD just did it, and hell, there's even a whole blog itself dedicated to the stuff called simply MonsterCereal (update your site mofo!), but I just couldn't help myself. I had to get in the action. Where I grew up, finding a box of Count Chocula or Boo Berry was a very rare occurrence. On top of that, I never even seen a box of Frankenberry up close until about six years ago for the first time. I remember some thirteen years ago driving an hour to see a beautiful, gothy young lady. We had such splendid times, and in her town there was a supermarket that I had never heard of before. We must have been stoned (when were we not?) when the subject came up, but she told me that fateful day: There are monster cereals inside.
To the Boomobile! I bought three boxes of Chocula that day in my glazed, red eye state of glee. I visited her regularly over the next two years and wouldn't you know, I'd end up bringing back a box of Boo just about every weekend. Those were good times man. I was much, much more of a cereal eater back then than I am now. I never really got "the munchies", but when it came to cereal nothing smaller than a salad bowl and a third gallon of milk would do for the festivities. Went through a whole box of Rice Krispies Treats cereal in a day. I was fuckin' addicted to that stuff. But no matter how much I loved that, or Oh's, or Kix, nothing really compares to the feeling one gets when it's sugary Monsters.
I gotta say, I thought the artwork from last year was horrible. Man do I miss the classic designs featuring the full characters. It wasn't even too long ago that they changed it all up, and while I don't mind portraits, these just aren't cuttin' it. The previous designs were shoddy and looked like they were drawn by an eleven year old girl - no offense to the little twihards. This brand spankin' new box art isn't anything special either. It's at least somewhat stylish, a different and weirdly distorted take on the characters. I'm just not fond of the style, that's all. FrankenBerry doesn't look all too bad, but Chocula got robbed and poor Boo there quite simply got fuckin' massacred. He doesn't even look like himself, let alone a caricature. For shame!
The three major monster cereals are pretty constant now all year around these parts (and it's been a couple years since I checked but so was Quisp!), so I don't really blow a fat milky load whenever I see em in the stores. But I do get excited whenever there's new artwork done or a promotion. I was aghast when I saw what they did to my favorite character Boo Berry. Would it kill ya General Mills to give the guy a yellow hat and not seriously deform the shit out of his beautiful stoned face? Oh, and some mail in figures or decoder rings or other merchandise would be a nice little treat also. Maybe some new commercials or a cartoon series on the Hub? All we get this time around is the same comic on the back of each box and a whole grain guarantee. Lame.
I don't mean to sound like an ungrateful bastard but perhaps I am. I don't want some weak comic or some online code where you redeem some useless computer bits. I want an in box prize aside from the tasty cereal. Fuck, even a trading card would suffice. Just throw something cool at the customer GM. It doesn't have to be something huge like a return of Fruit Brute or Yummy Mummy *hint nudge*, but it's f'n Halloween time man! Take advantage of this, and have some fun for Boo's sake. It's time for the monster cereal characters to rise up and get the recognition they deserve. Who's against me?
Laid to Unrest by DrunkethWizerd

Email ThisBlogThis!Share to TwitterShare to FacebookShare to Pinterest
What the... Food