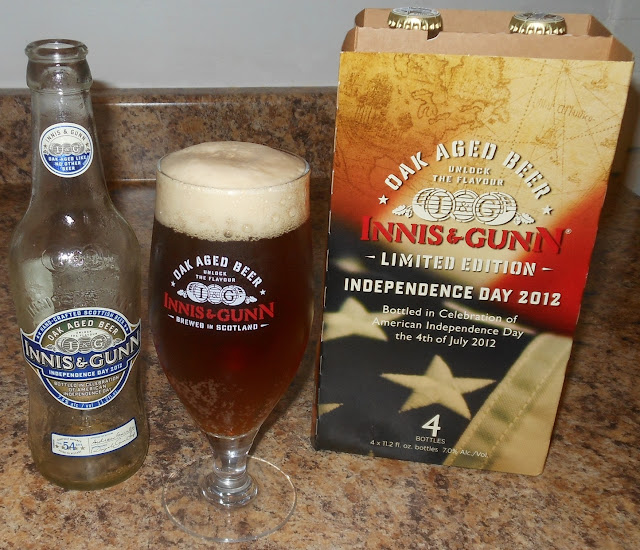 About: "We are delighted to present this Limited Edition Innis and Gunn beer which has been brewed, matured and bottled to mark American Independence Day, the 4th of July 2012. This beer celebrates the Heritage, the Spirit and the Character of the people of America and the people of Scotland. It is a great collaboration of full-flavored Scottish malted barley and mouth-watering, zesty American hops, all slowly matured in our brewery in Scotland. Food Pairings: Wonderful with barbequed ribs, steaks and chicken. Or try with some spicy prawns."

Thoughts: Poured a really warm reddish shade of orange with a slight auburn lining around the edges of the glass and some reflective yellows bouncing up from underneath. The brew is clear, but still a bit dark and hard to see through. The bright white head was quick to form and popped itself away rather quickly as well.

The nose up front is very malty. There's vanilla and oak for the most part, and there's a mild hint of fruitiness that resembles spicy apples or pear. It smells like an Innis and Gunn. Gotta love it.

The taste starts off very bready and sweet, with a hint of spice, like an apple turnover with cinnamon. Then there's a rush of citrus malts that are slighly sour but very mild like a tangerine / grapefruit mix. And after that everything really mellows and that oak comes slowly flooding in and it's so calm.

Mouthfeel is a medium with a body that expands to a foam rather quickly. It's refreshing, but definately a sipper beer and while it's a little bit drying, it's coating at the same time so it's not too dry.

Innis and Gunn is always a treat for me. Every time I see something new from them it is BOS: Bought On Sight! The liquor store I frequent just got a new little wooden Innis and Gunn display and put it in a decent viewable spot. They only had two of these 4-Packs and they must have just gotten them in. This one ain't my favorite of theirs (can the Rum Cask be topped?!), but damn if it still ain't some good shtuff!

Email ThisBlogThis!Share to TwitterShare to FacebookShare to Pinterest
What the... Barrel Aged, British Beer, Innis and Gunn, Scottish Ale

They just released a Spiced Rum Aged ale. I saw it at the beer store about an hour ago, but didn't pick it up due to my general disgust over the disorganization of the store. If that liquor store got in a new Innis & Gunn display, something tells me they'll be getting in the Spiced Rum soon.

Thanks for the heads up.

There was an Innis and Gunn tasting at my liquor store yesterday from 1-3 and I missed it since I was out visiting a friend. The last time I went in there I had already tried all the product so I didn't think anything of it. I'm always on the lookout though.

Yeah you were right. I just hit up the store today and they've got four packs of this Spiced Rum Aged Ale. Grabbed one.