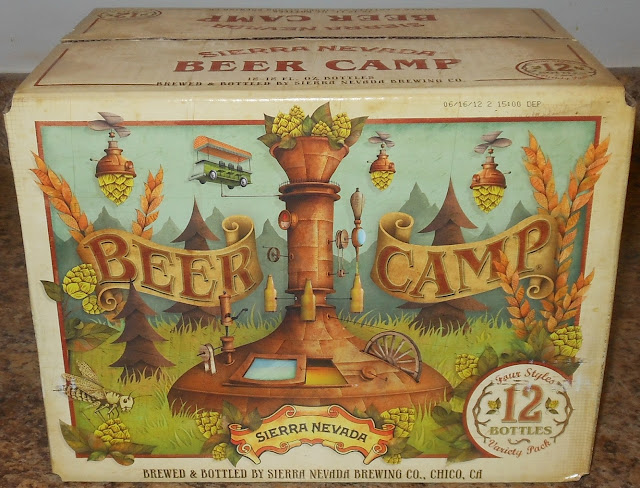 I was mildly excited about this and picked it up on sight. Care to read what I thought about these? 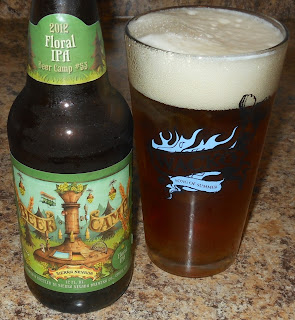 About: "This unique take on the IPA style takes the floral aromas and flavors found in hops, and combines the with actual flowers! This medium-bodied brew was made using actual organic rose petals and rose hips for an unusually aromatic experience. With a complex mix of floral, citrus and pine hop flavors, and a balanced and easy-drinking malt backbone Long Stem IPA is a one-of-a-kind beer.

Thoughts: As I poured this the head got off to a pretty violent start then slowly fell back into a sliver atop the brew. It's got an orange color overall, perhaps a little bit of a cinnamon color to it. When I hold it up to the light I notice that this beer is Grainy as all hell! It looks like someone took a couple hop flowers and took a cheese grater to em.

Smelt pretty pungent during the pour. Well, the scent is certainly more floral than anything else. I'm noticing like a 75% lemon 25% grapefruit citrus hop background under the flowery aroma. It's kind of sweet, like those Lemon-head candies, or those old school sugared lemon candies that your granny would have in a jar for three years straight and when  you tried to pick one up the whole bowl would come up with it! It's like that, and soft flower pedals.

The taste pretty much matches the scent exactly, which isn't a bad thing at all since it smells really cool. It's got a decent bitterness, and a light touch of pine, but it's also a tad sweet too.

This is an OK beer. It's not incredible or mindblowing, and unfortunately not too intresting really. But it tastes good at least, and I guess that matters. Right? 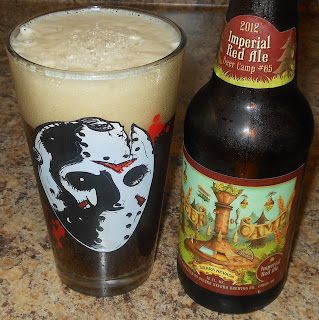 About: "This Imperial Red Ale takes the bold hop profile found in a traditional Imperial IPA and turns up the malt. It has big aromatic hop notes of grapefruit, peach and melon, balanced by a very smooth and surprisingly robust malt body. Hops take the lead on this beer, but the malt tames the bitterness and adds a unique drinkability.

Thoughts: This beer poured a translucent cherry cool-aid like color, with a huge somewhat pink looking fluff of a head. There's tons of carbonation bubbles going up, the smaller bubbles rising slow and the bigger bubbles zooming right past them. Cool. There are really neat speckles scattered all throughout the brew too. I like the cut of this one's jib, or something...

The scent isn't all too strong. It's hard to pick up, and a little bit strange. A very low droned, malty and sourness to it. I'm getting toasted sesame seeds I think, or like, funky sourdough bread.

Taste is bitter straight off the bat. And smokey. And tart. Well hidden alcohol. A prickling sensation while it's held in the mouth. After the swallow the whole back of the throat is as if I had just chewed a piece of lemon peel. Eventually that dies down a bit, and as the beer warms it become easier drinking. It tastes kind of like a funky, flat, spiced soda. Meh.

Light, airy and fluffy like a bit cotton ball as it expands.

Not really digging this one too much, despite the noticeable quality. 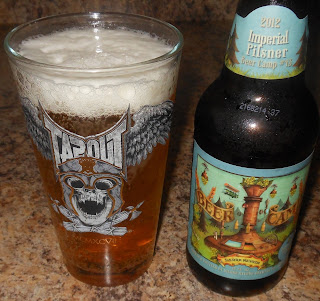 About: "Packing a big hop-forward punch and bright crisp finish, this golden pilsner features a hearty dose of "sticky" resinous Crystal and Pacifica dry hops, which balance the light-bodied yet complex malt background.

Thoughts: Poured an incredibly clear light yellow. There's a lot of carbonation going on. The head was really crackly at first but didn't die down as fast as I thought it was going to.

Slightly bitter, herbal... quite yeasty, and a there's a bit of twang to it. There's a subtle spicyness to it and a  Lemon kick in the background.  In fact, a lot of this beer is subtle. There's really not a lot going on  at all, other than it tastes OK. Very mild and soapy, aside from that tingling spice that's it's got there. It's a little bit funky. Aftertaste is like ash.

Mouth is light, easy and a little watery.

Yep, nothing I love more than sitting back with an Imperial 5.6% Pilsner after a hard days wor... oh wait, I fuckin' hate pilsners now don't I? Forgot about that. But hey, maybe I'll find an eye-opener pils one of these daze, who knows.

About: "Brewed in honor of the season's only snow-day in Chico, this big stout was born out of winder, but is perfect any time of the year. This imperial oatmeal stout is inky black in color, with a big milk chocolate, mocha-like aroma. It has a silky body from the use of rolled oats, and a round and lasting finish. 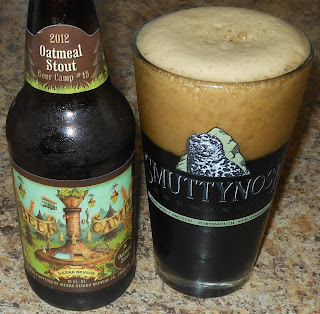 Thoughts: The deceptively hidden milk-chocolate colored head on this erupted in a downward fury that nearly overflowed. In its fluffy and giggly wake, it left a pitch black brew that clouded up the sides of the glass.

Starts off with a gentle sweetness, with kind of a tingle that slowly fades into a slow roasted bitterness that isn't all too powerful. Alcohol must be incredibly well hidden in this one. After a while it becomes bittersweet, and though there's a bit of a burn around the back of the throat once it warms, it's all pretty mellow. There's nothing extreme at all about this one, but that isn't really a bad thing here.

It's a little bit more watery than I thought it would be.

This one is decent enough. Once it gets room temp there's a bit of black licorice that comes out, and that's pretty nice.

Final Thoughts: Overall I think all four of these beers lacked in a special something. I can see why they're pretty much brewpub exclusives and don't imagine that any of these will ever see a full time release on their own. I am interested in trying more beers from their uber-long list of Beer Camp brews though. Hopefully next time they'll keep the original names on the package though. I wasn't fond of the generic titling (and labeling) on these.

Considering the fact that I didn't totally love at least one of these four beers, the only way I'd buy another Beer Camp 12 Pack for 20$ would be if they were four different brews. Though it goes without saying that all four of these beers are far better than a lot of the mainstream shit out there, they don't really hit me as "labors of love" or whatnot. Quality brews nonetheless, but not nearly Sierra Nevada's best moments.

I was pleasantly surprised to find your Beer Camp review this morning. I'm a fan of this series, along with Sam Adams longshot series. I appreciate the creativity that goes into these beers, even if they're hit or miss. It's cool to drink what is essentially homebrew out of a production brewery.

Of this year's Beer Camp, the IPA and Oatmeal Stout sound interesting. Although any take on a Pilsner piques my interest. Speaking of Pils, give Bitburger out of a can a shot. If that doesn't do it for you, Pilsner just isn't your thing.

Yeah, it is a really cool idea and I'm glad they do it. It would be great if DFH did something like this with their house beers.

I found a six pack of the Longshot but passed on it for whatever reason after looking at it for about five minutes. Decisions, ya know?

Thanks for the suggestion.