About: "The Beast is a seducer – accommodating, complicated, powerful, dark and created to last the ages. With a deep burgundy color and aromas of honey, nutmeg, mandarin orange and pineapple, this massive and challenging brew has flavors akin to a beautiful Carribean rum. Dates, plums, raisins and molasses are dominant in a rich vinous texture. Cellarable for 10+ years. The Beast is the first installment of “The Demons of Ale” series. 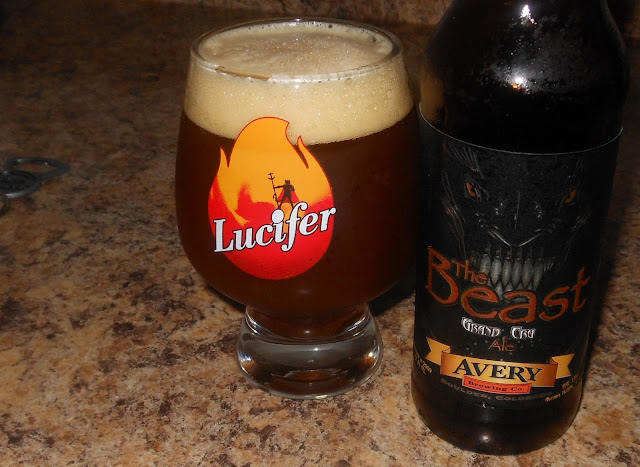 Fire and maniacal laughter. The smell of this thing is dangerously sweet and heavily intoxicating. Picked up dark fruits immediately: plums, raisins, dates. Then mainly caramel, sugar and booze... afterwards some honey and a shitload of molasses. And smores too.

This is some sinister shit right here! Hell fuckin' yeah. Indeed a fire is ignited in the belly upon consumption. Sugary sweet graham crackers fill the mouth, then a stinging booze tickles the throat just before the swallow and afterwards a blistering attack of dark fruits explode in every direction before a gentle tingle of burnt sugar and honey slowly ride out. It's got a rum taste, wine like finish, little bit of smoke from the fire being extinguished, lingering tropical fruity notes in the aftertaste while breathing in.

Mouthfeel is extremely smooth, and tingly.

I knew nothing about this beer before I picked it up, the only thing I knew is that it had been calling out to me from up on that shelf behind the counter, where the few bottles aren't in direct visibility. The last few weeks that I've been picking up swill, I can't help but look up and over there at it while I pay for my shit. This is my first beer from Avery Brewing, and after I looked on their website now I see that they're also the providers of this pumpkin beer Rumkin that's I've been hearing so much about. I. WANT. IT!

I passed a bottle of this up during a trip upstate last year. Sounds delicious... I knew I should have grabbed it. Next time I come across a bottle, it shall be mine!