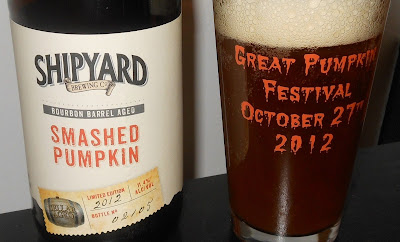 About: "Shipyard Brewing Company has released the first in its new line of limited edition bourbon barrel aged ales. In October, 350 cases of Bourbon Barrel Aged Smashed Pumpkin will be released in select markets. This beer has been brewed and carefully cellar-aged in small batches for over 100 days in decanted bourbon barrels. This line of unique beers allows Shipyard’s brew house crew to blend their creativity and passion for beer to create these special, limited release brews. These 750 milliliter (1 pint 9.4 fluid ounce) bottles are all hand filled, corked, and individually labeled with the bottle number. Recommend serving temperature is 55 degrees Fahrenheit in brandy-style stemware. Malt: Pale, Whole Wheat, Munich / Hops: Willamette and Saphir / Yeast: Top-fermenting English."


Thoughts: Barrel Aged Smashed Pumpkin poured a dense, cloudy and hazy apricot puree color, and with a little bit of a violent pour on the second try, a slightly yellowish head foamed up then quickly disappeared. Carbonation is very low of course.

First scent is straight up bourbon. I let it sit for about two minutes and went for it again, and this time I'm bombarded with beautiful spices: Tons of vanilla and cinnamon, with a little bit of nutmeg lingering behind. It's really boozy and sweet at the same time. It's got a light malt base which is excellent because it really allows the other factors here to shine through.

This baby is sweet as hell! It's heavy on taste, the spices are plentiful, and yet, nothing is overly extreme. It falls back at a moderate pace after the swallow, but the taste doesn't fade quickly which is a relief. It's got a decent spice kick to it. It's boozy, buttery, robust, spiced and just has a very nice flow to it. It's a bit one note, but it's a damn good one note and I'd say that this one is a lot better than anything else they put out. Though I might prefer their regular Smashed Pumpkin to this, but I haven't tried it in a year so we'll see.

Mouth feel is not really watery, not really syrupy, thought it tastes a lot more like syrup, it feels more like water. It's somewhere in between. Foam is very light and leaves a bit of a residue on the inside of the mouth when it's all said and drank.