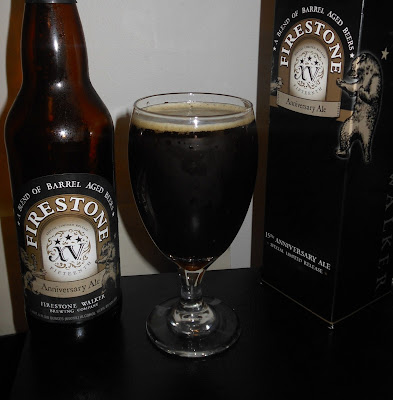 About: "As a finished beer, XV is alive with amazing complexity and yet it is quite possibly the most integrated and seamless blend yet.

The beer is unfiltered and unfined, so there will be a small amount of sediment in the bottom of the bottle.   XV is best enjoyed poured carefully into a half-filled brandy snifter or wine glass. Allow it to warm to 55F to fully enjoy the pleasing and complex aromas. As the beer sits and breathes in the glass, a richer, orange zested, chocolate dusted, vanilla custard character is reveled, so take your time. If you wait to open your bottle later, store it in a cool dark place. I suspect that this beer will age well and change favorably for years to come. It was an absolute pleasure in the making and I truly hope you enjoy our Sixth oak-aged blend!  Our journey continues and it’s just as fun and exciting now as it was back in 1996. 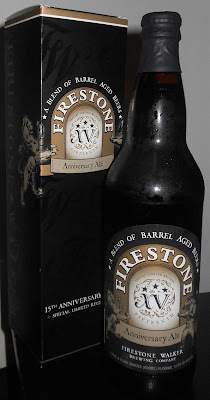 Thoughts: I've never had a beer that came with a certificate before! Wow... cool shit.

XV poured a dark cherry color with a slightly brownish shade once it filled the glass. The head was minimal and very tan, and understandably faded quickly.

This beer smells absolutely beautiful. God damn... boozy dark fruits and dark chocolate predominate. It is wondrous. This is one fierce smelling barleywine man, I'll tell ya, and the really cool thing is with this blend that they've done this beer has a really awesome stout characteristic that comes in halfway through and a big hop profile at the end. Up front though it's really malty, heavy and dense smelling. In a word: Powerful.

First gulp and I am fucking blown away! You don't really get a ton of oak in the scent at first, but right off the tongue there's a massive sweet and delectable booze blow followed by a smooth woody finish. Second gulp now, this is pure insanity. The spice and flavor rolls around vertically in the mouth, constantly pounding down on the tongue like raindrops of ecstasy. It tingles, it's sticky, it's got a little bit of a harshness to it but it's not overly harsh and it falls back reasonably. It's slightly smoky. Tons of dark fruit, plum, raisins everywhere, figs, freshly fallen leaves, vanilla, Belgian chocolate, cinnamon, pepper... hints of cherry, cut grass, celery salt, mild coffee, red wine and hidden floral notes after it's swallowed. Oak is everywhere and leaves the mouth feeling as is there should be a few splinters in there after a short bit of drinking. This is some crazy shit!

The mouth feel is full, takes a while before it gets foamy, stinging, tickling and coats evenly leaving a massive amount of the gorgeous taste to linger for long periods between sips and gulps. Starts to get drying after a while, though not aggressively so. Nice feeling all around.

After warming for an hour this one gets really mellow. Slightly puckering effect with heavy booze, and yet, the booze isn't grossly overactive, but rather just explosive at first and fades so quick due that barrel aging that it's simply blissful. The price of this one hurt me at first, so much to the fact that I left it in the fridge for a few months. Tonight was the night, and unholy hell, what a fantastic night it has become! If you ever see this on the shelf, buy it!

In an act of courtesy, I offered a drink to my lady:

Me: "Hey, come over here and tell me what this smells like."