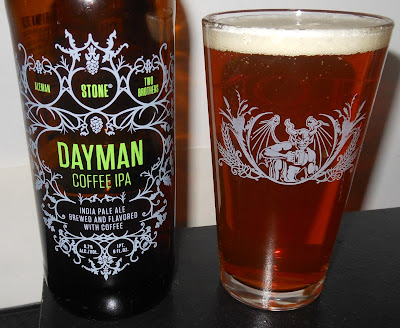 About: "Jim Moorehouse, Nate Albrecht and Brad Zeller, three pals planning to open a Chicago brewpub under the moniker of Aleman, won first place at last year's Iron Brew homebrewing competition in the Windy City. Their style-bending IPA artfully married the assertive tropical bite of Citra hops with amazing coffee flavor and aromatics to create something truly unique and exceptional. Serendipitously, Two Brothers recently kicked off a new adventure roasting their own coffee beans, and provided just-in-time freshly roasted java for the brew. The result is an innovative IPA that's well balanced and intensely flavored thanks to the felicitous blend of hops and fresh roasted coffee."

Thoughts: Had to pour this one straight down into the glass to get that half finger sliver of a head there, which was slightly off white and bubbled away quickly. DAYMAN poured out a light but vivid orange color, with perhaps a slight shade of auburn in there too. Lot of carbonation bubbles rising despite the short head which is strange.

Smells a lot better than I had thought it would. I didn't know what the fuck to expect when I read "Coffee IPA" on the bottle, but scent-wise the blend is pretty remarkable. You get those hops for a split second before this ridiculously sweet smelling coffee rushes in and then just swirls around. After that it's like a really neat blend of an ice coffee with tons of sugar and cream... and weed.

The taste: Out-fuckin'-standing. Wow. What a beer. For a coffee beer I mean, don't get me wrong. I hardly ever drink coffee, but I used to years and years ago. I got these amazing tasting iced coffees all the time from this local shop back in the day, I think the name was Starfucks or something, I can't remember, and the flavors in here taste just like it. Especially considering at the time I was reeking of that dank bud, this one just really takes me back to the good old daze. If I hadn't ashed my stash this would be the perfect opportunity to get back to the review, so... this beer has a crazy mix of gentle bitter and sweetness that compliment each other well. There's this lingering bitterness that lasts the whole way through, but man it's not really bitter at all. It's got this indulgent sweetness that pulls it back the whole way, but at the same time it's not sweet at all. The mingling of flavors here is just so strange that it has to be experienced by anyone who's into IPAs or coffee just to see how in the hell this sort of thing could happen. This is a weird one!

Decided to look this one up and I guess some people are saying that this is better "on tap". I want to know who the fuck bought a bottle of this AND had it on tap in the same week it came out. They say that "the hops really pop instead of being overflowed by coffee"... but uh, well, I guess you've got to be in the right place at all times. I couldn't possibly know how the tap "with heavier hops" compares to this, but after warming a bit the coffee does tend to take over. When I first opened this hops were crazy nuts, and then everything mixed brilliantly... now that I'm later in the day and am drinking the last half of the bottle after hitting up some other brews, this one really has a strong coffee kick to it. So maybe it's just the warming effect.

I enjoyed this. It was one of those surprising bottle openings that I didn't expect to please me, but it just happened to be so weird that it was a nice change from the same ol' shit.