About: "Too extreme to be called beer? 120 Minute IPA is brewed to a colossal 45-degree plato, boiled for a full two hours while being continuously hopped with high-alpha American hops, then dry-hopped daily in the fermenter for a month and aged for another month on whole-leaf hops! Clocking in at 15-20% ABV and 120 IBUs, 120 Minute is by far the biggest IPA ever brewed! It's easy to see why we call this beer THE HOLY GRAIL for hopheads! We brew 120 Minute IPA a few times a year, but it goes fast. If you find some grab a few bottles -- some to enjoy and some to age." 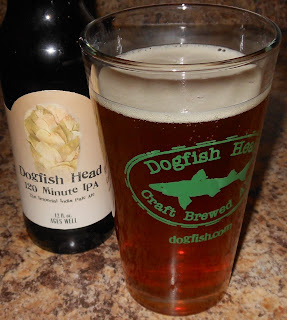 Thoughts: 120 Minute poured very hazy orange color with an off-white sliver of a head that faded rather quickly. As I hold the beer up to the light, I notice that this beer is grainy as The Gates of Hell.

I don't think I've ever smelt anything this good... well, besides my fingers on the way home from my first date. The scent is complete and total sweetness, with an apparent and strong warning of alcohol fumes coming up from behind. It smells dangerous. Dangerously good that is!

Hot damn, this is some strong shit. Not only does it immediately warm, and leave a sting of agonizingly blissful poison, but it's just beautiful and sweet. I don't think I've ever had anything this strong that tasted this good. I think I'm in lust again. It tastes of incredibly beyond-sweet caramel at first, and just as those hops start to come through the looming shadow of booze darkens the palate before all the flavors at once mingle together. It gets very peppery.

To me, 120 Minute tastes like a barleywine (I see what you did there!), and I like that. I like that a fucking lot, actually. It's not uber hoppy as I had expected. Sierra Nevada's Bigfoot is a hell of a lot hoppier than this. In fact, the strong alcohol holds precedence over the other flavors while cold with its buzzing, cloudy haze. As it warms and you've been into it a bit, the alcohol blast dies down a it makes it even more of a wondrous experience. This beer is blended superbly, and those hops get a real time to shine and come through at the end of it all. They're still not over the top hop strong, but it doesn't matter as nothing fucks this beer up. Would I buy another bottle of this? Hell yeah I would.

This beer is amazing, hands down. I've had a few bottles over the years, but it's so much better on tap. The hops are stronger. You get more aroma and flavor, but it's still well balanced due to the extremely strong malty backbone. Pair this with some World Wide Stout and you're in for a hell of a night.

Maybe I'll grab a bottle of both and mix em in a big vat.

That would be one fucked up concoction.