What's Drunketh been up to lately? Aside from writing some geek ass brew reviews that nobody likes and posting screenshots of hot chicks not starring in horror films, well, I've been doing more of the same ol' shit that I've done for years now: Sitting in a dark room, drinking beers, and hell, I even started drawing again. Did I mention that I bought a case of Sierra Nevada HoptimuM this last month? That's a lot of cash pissed away considering it's ten bucks a four pack and there's 24 bottles in there... but what could I do, I'm addicted to the shit. And something about those beers just really wet my brain with some artistic flow, ya know. 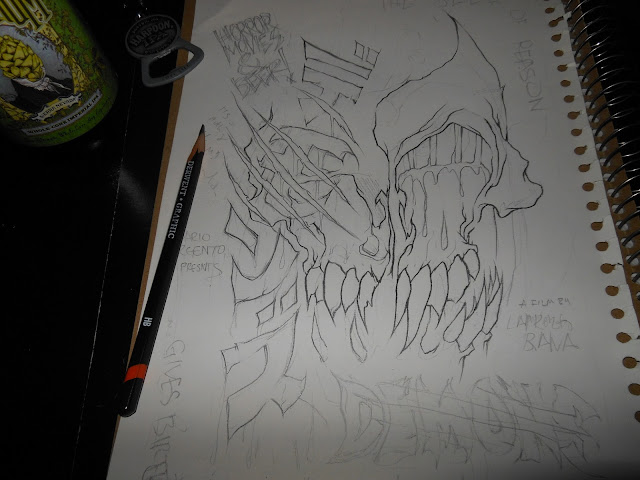 I had this old sketch of a skull laying in a pile of throwaway art, when I sat down with it again and started fleshing things out. It wasn't until I laid down the cage inside that eye when it hit me to make this into a little Demons flyer. Why the hell not. Once I get all of my line work done I'll start shading then throw in a splash of colors before scanning it and posting it here for all you bloodthirsty ghouls.

Email ThisBlogThis!Share to TwitterShare to FacebookShare to Pinterest
What the... Artwork, Horror

Lookin' great!! Any interest in making a new header for my blog Drinkin' and Modelin' ??? Monsters and beer man... think about it.