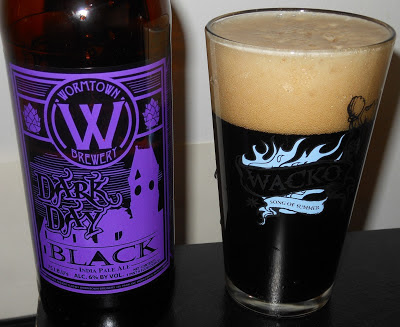 About: "Dark Day refers to an event that occurred on May 19, 1780, when an unusual darkening of the day sky was observed over the New England states and parts of Canada. The darkness was so complete that candles were required from noon on. Dark Day IPA is a collaboration with Dave Richardson from Gardner Ale House. Herbal hop aroma is complimented with roasted malt character. American de-husked roasted barley does not lend a bitter acrid flavor but imparts a roasted character that melds with low level caramelized malts. Big herbal, citrus hop flavors and bitterness clash with roasted and mildly sweet malt. Try Dark Day IPA and then drive to Gardner to try its sister brew Nightcrawler IPA."

Thoughts: Poured a dreadfully dark brown color that's not completely black in the glass but is impossible to see through. The eggshell head started slow and then uprooted itself, leaving a three finger top full of small bubbles.

Smells crisp. I like what I'm getting here. Though pretty hop forward there's a sweetness to the scent that really accents the herbal, minty qualities. There's some slight pine, but it's mild and very earthy, and a hidden punch of citrus behind that mint.

There's a lot of roasted malt to start off the taste. It was hardly evident in the scent, very background stuff, though with a black ale you know it's gotta be there. Aside from the boost of roasted dark malt, the taste is pretty consistent with the smell. It's got a potent herbal tone that flows through from start to finish. At the end of the gulp a slow rising bitterness builds and forms a minor haze of leaves and smoke. It's a pretty weird blend of flavors but they all intermingle nicely. After warming it gets a little bready and some caramel notes start to shine through. The aftertaste kind of tastes like raw sourdough that's been charred with a blowtorch.

The mouth feel is very light and bubbly. This stuff pretty much immediately turns to foam once it enters the mouth. I guess we can say that it's an airy situation. This is a decent black ale. It could have used some black licorice and some barrel aging, but at least it didn't reek of chocolate and coffee. Dark Day is my second beer from Wormtown and won't be my last.

Email ThisBlogThis!Share to TwitterShare to FacebookShare to Pinterest
What the... Black IPA, Massachusetts Beer, Wormtown

Great brewery name. Gonna keep my eyes peeled for this one.