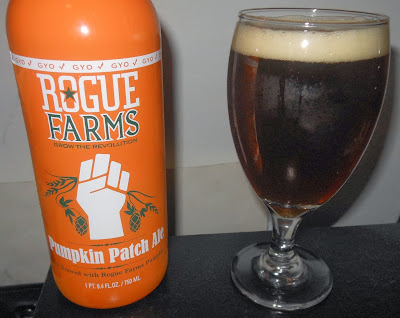 About: "The newest addition to the Chatoe Rogue series is Pumpkin Patch Ale, a beer made using fresh pumpkins grown in a patch that borders Rogue’s 42 acre hop yard. The pumpkins are picked, loaded into Rogue’s farm truck, driven immediately 77 miles to our brewery in Newport, quickly roasted, and pitched into the brew kettle to create a batch of Pumpkin Patch Ale.

Thoughts: I found this fucking bottle hidden in a walk in fridge, next to all the junk, the half used jar of relish, someone's iced coffee and some random bottles with no labels. I've never once seen this bottle on the shelf in this store, so what's the fuckin' deal here pal? They hoggin' bottles of the pumpkin ales people haven't tried yet?! Well whoever this was being saved for is in for one hell of a disappointment today my fiends.

I'm not really all that into Rogue Brewing, but you know how it is when it comes to pumpkin ales, especially those in big ass orange bottles! I don't know what year this is, though I assume it's this year, and also the ABV isn't on the bottle so I'll have to look that up later. Right now though, I'm cracking this bottle.

The cap popped off really easy. Hmm. Had to pour this one straight down the glass to get that head on it. The beer poured a muddy light brownish burnt auburn orange color with a grayish off white head. Some very low levels of carbonation it seems as well.

This smells like a rather average pumpkin ale. It's very earthy... and it's making me sneeze. It's very raw pumpkin heavy. The pumpkin spice is there, but it doesn't come out all too strong in the scent. There's lightly toasted malts, sunflower seeds, day old raisin bread, cinnamon sticks, and dirty water.

The taste is pretty much identical to the smell. It's a little bit fruity, not overly sweet, but not bitter or raw tasting at all, and is overall a gentle one. There's no real pop of anything here, aside from a mild sting at the beginning. Other than that, it's pretty mild all around. Spices are still subdued, when I thought they'd come out more in the taste. It's malt heavy, sweet and mild, earthy, with just a touch of pepper, and it's even fresh tasting. The main flavor here are the pumpkins. Caramel malt helps things along and luckily all the other stuff plays a nice roll of holding the beer up. While I would have loved a lot more pumpkin spice in this, there's nothing wrong tasting about the beer at all, which is more than one can ask for here. It doesn't taste too strong though... for such a big bottle, and what seems to be a sessionable pumpkin ale, perhaps this is meant to be shared at the Thanksgiving table. Then again the suggested food pairing for this is pork and dessert. Guess I should have had it with a Burger King bacon ice cream sundae. Oh well.

This one's really squashy. Nothin' wrong with that. It also cost less then I thought it would. This one gets filed along with all of the other standard pumpkin ales that many independent companies put out, only it's a little bit towards the top of that list since there's no bad flavors here. It's not overly sweet or bitter and it's generally enjoyable to drink.

Email ThisBlogThis!Share to TwitterShare to FacebookShare to Pinterest
What the... Pumpkin Beer, Rogue

Oddly enough, I didn't see this one at the store. They typically carry Rogue brews, including their farm series... at least they use to. Doesn't sound like anything out of the ordinary, so I guess I didn't miss out.

I think I'm loosing my taste for the standard pumpkin ales, and even some of the non-standards. The best pumpkin beer I tasted this year, besides the all mighty Pumking of course, was Timmermans Pumpkin Lambicus (http://beeradvocate.com/beer/profile/2791/85847). If you come across it, definitely give it a try.

Trust me, I was looking all over the place for that. I've never actually had anything from Timmermans, but I'm going to be doing a lot of Trappist Ales and Sours soon enough. It's the only logical step forward.

As for standard pumpkin ales, once I level up to 10 on the gourd badge I'm only going to buy pumpkin beers that I've never tried before and my favorites each year.