Remembering... Mark of the Devil Part 3 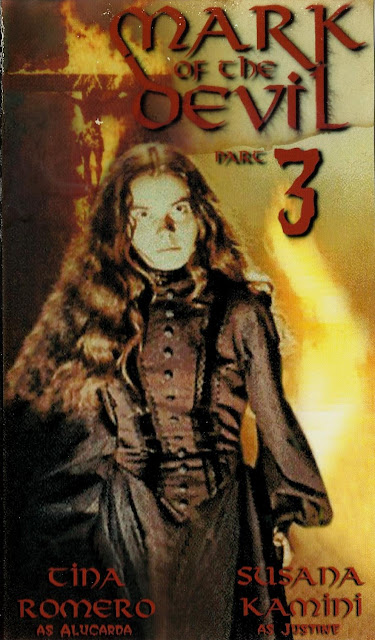 Juan López Moctezuma's 1977 film Alucarda, a perverse gothadelic psycho-sexual romp that revels in a passionate fast burning anguish, grasped stronghold to my rapidly warping brain at the impressionable young age of fifteen. At the time my mind had become immersed in dark and lurid imagery, with my focus leaning more and more towards the blasphemous. Morbid curiosity and an affinity for horrific fantasies led my thoughts and desires to wherever they may go, but in most cases ended up fully engrossed in horror films. The allure of horror movie VHS box art back in the mid nineties was such a compelling and euphoric attraction, that I could spend hours at a time down at the video rental shops just studying each one of them.

The power of a single photograph from a horror magazine, or a screenshot from the back cover-art of a tape, can simply not be underestimated. Disturbing, provocative and unsettling images captivated me to no end. I would stare at them, visualize, and draw them for my own personal pleasure. I even dabbled in creating some VHS cover sleeves for tapes I had purchased online and/or illegally recorded. [To the left is a scan of the front cover I did for an alternative release of Alucarda, where the title "Sisters of Satan" pops up for a split second before being covered by a "Mark of the Devil 3" title card. The back and spine of the art suffered even worse 'water damage' than what is visible at the top of this glossy paper printout.] 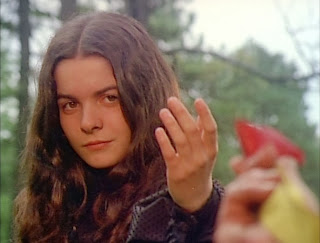 I originally discovered Alucarda under the title Mark of the Devil Part 3 during what I like to call my binge renting days (which coincided with my binge toking days, but preceded my binge drinking daze). These were the years where VHS was still running rampant and strong throughout the world, and DVD was only slowly starting to emerge. By this time the Horror Section of every rental shop, from mom-n-pops to Cockbusters and even some Unholywood, had seen visible signs on my nugget nectar on their product... and that's without a blacklight! There wasn't a day that I'd return a tape without renting a new one that very day, even if I had to strut like a boss down the road to the next shop, which most of the time I did... by getting driven there by my parents.

The tail end of VHS dominance due to the upcoming DVD path of destruction was indeed a sad time for horror fans, as many of the trve classics disappeared with a vengeance. Shitty used tapes with rewind damage on all the sexy parts were sold for ridiculous prices, but the crime proving to be even more despicable was that most of the tapes were either stolen by employees and owners or simply thrown into the garbage. EBAY probably didn't exist by this point or had only just started up, so you can just imagine the space saving procedures which were used to display the "new and improved" format. A basement full of expensive (yet not at this point all too rare) VHS probably seemed like a good idea at the time for some owners, but I'm thinking that a lot of them probably had wives who kept their fancy wigs and stuffed poodles down there for safe keeping. Women and their fancy wigs! Am I right fellas? 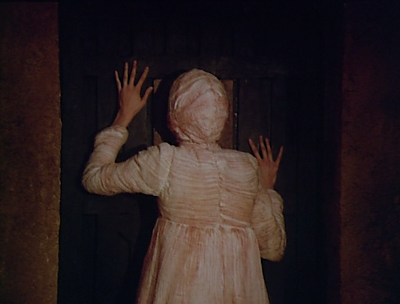 I rented Mark of the Devil Part 3 with a friend of mine named Chase, who supposedly suffered from ADHD. His mother was freakishly controlling and invasive, and forced him to eat baby food regularly. One thing I could tell right away when I first met Chase was that he was incredibly hyperactive. Or to put it more properly, he was a total and complete fucking nut. A year older than me and actually well versed in some areas that I was not at the time (such as vast exploration of heavy metal and many things that were "cool"), but aside from being a metal-head who looked like Beavis and Butthead fucked and he was the baby they had, he didn't really have a lot going for him. Chase was a tormented and demented soul, and was trying his damnedest to rebel like a motherfucker from his mom since he was scared shitless of being a lonely ass punk bitch. A task I would constantly try to help him out with, but would also ultimately fail at.

We got along like balls back then. Just two balls mingling together and swaying in the crisp, cold wind. The night in particular when I stayed over at his house I brought a bottle of vodka that I had grabbed from "The Box" (a story for another time). We chilled uncomfortably while his mother hovered throughout the kitchen and constantly opened the sliding blinds which she called a door to his room. It always took her a while to fall asleep in the chair outside of his room, so he'd eat cold Chef Boyardee Ravioli straight out of the can and masturbate to scrambled porn on the PPV channel, while I'd sit in the corner on his AOL dial-up login and contemplate suicide. It was fun. Not as fun as getting straight liquored up and watching Alucarda for the first time at midnight while eating nothing but baby food, raviolis and the occasional twinkie that is! Why this dude's mom would keep him on a restricted diet of baby food and canned raviolis, only to allow him boxes upon boxes of twinkies is totally beyond me, but what the fuck do I know!? I'm not an old psycho bitch with an invisible bloody cord dripping from my vag that's wrapped around my sixteen year old son's neck. 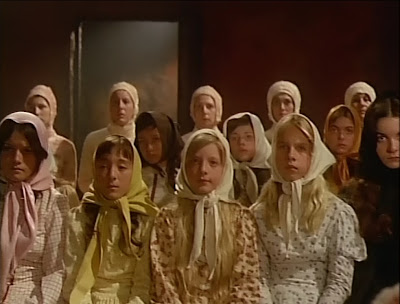 We rented Mark of the Devil 3 on my Hollywood Video card seeing how Chase wasn't allowed his own for being "irresponsible", even though he had never actually had a card in the first place to be irresponsible with(!) We also rented Mark of the Devil Part 4 at the same time, which turned out to be The Satanic Rites of Dracula... or Horror Rises from the Tomb... or Tombs of the Blind Dead, I can't really fucking remember which one it was. We watched that one after Alucarda and only halfway, as after the vodka kicked in we decided to go out for a middle of the night stroll throughout the empty town. As young men with mental problems, it was indeed a treat to witness the town as it slept, the lights blurring and swaying with each turn of the head. Looking back, these days I wouldn't even think it over let alone go walking around for no reason whatsoever. It's boring as shit when I think about it now, but back then it wasn't. That was adventure.

One of the many adventures me an this crazy little bastard had. And not our greatest, mind you. I kind of doubt that till this day he actually remembers this movie though. We were both especially fond of girls in black and found Tina Romero to be incredibly fucking sexy. The crusty orange stains on the front of his tidy whiteys the next morning was proof enough of that! There's no doubt though that this film did hold some sort of fiendish hypnosis over our brains as we both ended up dating goth girls just after seeing this. Of course this was around the time The Craft came out in theaters, so all of a sudden one out of every thirteen chicks in town was now a "witch". But I didn't have a problem with that shit at all, oh no. Black lipstick on my dick. Something about Mark of the Devil Part 3 that we both could instantly relate to was the fact that Alucarda was a total outcast. She's the weird one, the freak, and more importantly, the one that's "crazy". 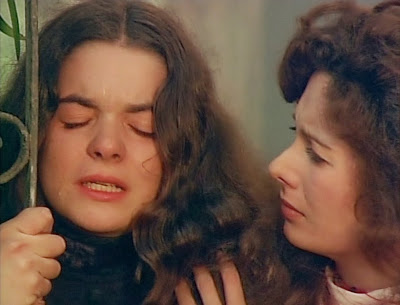 Mark of the Devil Part 3 was a film that clutched me forcibly by the balls and never let go. I had seen movies with similar themes while growing up, such as Carrie and The Exorcist for instance, so I had already experienced blasphemous behavior, vulgarities and blood soaked revenge on the screen. But nothing had truly prepared me for the boner inducing madness that is this outlandishly arousing gem. Devil Worship! Bloody Rituals! Nudity! Orgies! Lesbianism!! By gawd, don't even get me started on the sweet, sweet lesbianism. And a Goat Head Motherfucker with a hand on each girl's titty, leading oh-so succulent flesh all the way straight to HELL. Not only was the movie just undeniably cool, but it was weird as all shit too. The bizarre music that comes booming out of fucking nowhere while Alucarda and Justine become entranced by something mysterious yet preposterously evil does the job of luring the viewer in. Add on top of that these two hot girls getting naked with the snap of the Devil's fingers and screaming for hours like god damned lunatics, and you've got yourself an instantly captivating viewing experience.

That night before laying my head down for some much deserved sleep, I reached inside of my backpack (moving aside my favorite CHERI porno mags) and grabbed a new Blank VHS tape so I could proceed to tape the shit out of the craziest movie I had ever seen. Being the nerd that I am I always had Blank VHS tapes handy, you know, just in case. At home I of course had four VCRs set up in my system for multiple taping possibilities, along with my NES and SNES. Chase had two hooked up in his room for easy taping and making compilations of his favorite x-rated scenes. Back in the day you weren't shit unless you had two fucking VCRs, and you sure as hell weren't a friend of mine if you didn't have more than one. But I digress. I think what has attracted me to this film more than anything else over the years - more than the nudity, cutting, screaming, bloody kissing, and taking delight in praising all that is evil - is its immeasurable sadness. I really get into that shit. But I've obviously grown intellectually since then, and that sort of thing appeals to me at a real profound and sentimental level. And while I could go on and on about that, I'm not going to sit here and delude myself. I think that what it all boils down to - whether you're looking at it through the eyes of an excited young teenage perv, or from the mind of the broken and sad old man that he's become - it's all about one thing: these chicks are getting naked for Satan! Awwwwwww yeahz.

I'm still hoping to find a chick that will get naked for me and satan. Absolutely, positively, no luck there, though. How you doing with that sort of thing?

Been there, done that.