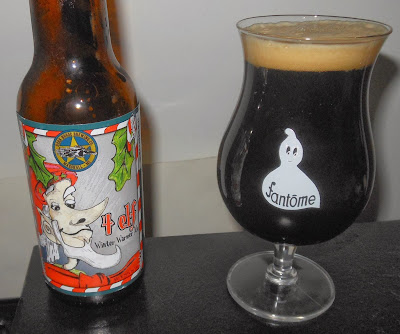 About: "A spiced Winter Warmer brewed with nutmeg, clove, allspice and other holiday flavors." Gee fuckin' whiz, thanks for the info there!

Thoughts: 4 elf poured a super dark near-black shade of brown with hardly any light coming though, and only around the top. The dark tan head is filled with various sized bubbles and gloppy in certain areas, so it looked a bit disgusting after I took that photo.

This beer smells great. Before you even get to the heavy malts or hops it's a sensation of chestnuts roasting, sweet cinnamon and sugar spices, loads of nutmeg, some ginger, and the rapid ejaculate from a rather mischievous elf. Smells kinda like a cake or cinnamon roll, but not like a cinnamon roll like the far superior Hoppin' Frog's Frosted Frog. This one smells more like an elvish cupcake. Or a sweet sugar cookie left out for Santa. A dirty cookie no doubt!

Taste is a bit of a strange one. It starts off very malty, lightly spiced, both of those things fight it out. It all falls back to a wonderful aftertaste. There's no hint of booze anywhere. It's got a really dense raisin-bread type vibe to it with a lot of spice that not only shows itself during the drinking, but builds itself up after each gulp. It's like the spice is starting to gang up on the tongue after a while too. This one is pleasant. It could be better when it comes to the malt and bitter department, but for what it is, when the spice hits for that strong moment it's really good. Also it's got no ill tasting aftertaste and is a little bit fun. This is one of those stronger beers where you can really taste the water and base ingredients, and it's all a bit earthy.

Tis simply a winter warmer after all, but a damn fine one compared to some of the others I've had, and mind you I haven't had many. But this one does taste more like a "Christmas ale" more than a "winter warmer" so it's got some points going towards it. Also, that Elf has got a mighty fine curled goatee.

Email ThisBlogThis!Share to TwitterShare to FacebookShare to Pinterest
What the... Christmas Beer, Dark Horse, Winter Warmer