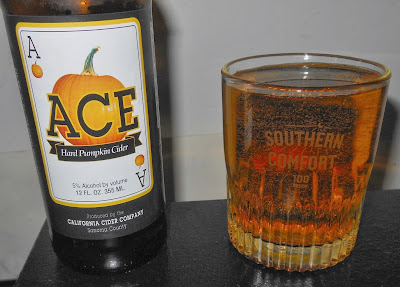 About: "We first made this cider three years ago in 2010. It has become extremely popular since then. We add cinnamon, cloves and allspice to fermented apple juice to produce a 5 percent cider which tastes like pumpkin pie. It is orange in color with a full rich taste that makes you want more. We carbonate the cider, cold- filter it four times before we bottle and keg it. This cider is released after Labor Day and is ideal for Halloween through Thanksgiving; although some customers think we should make it year round. It is the first Pumpkin cider to be made out West. One word for ACE PUMPKIN, delicious!"

Imagine that shit, if a pumpkin was an actual suit in cards. Because fuck hearts, that's why. ACE poured a golden orange / green looking type of color with lots of bubbles from the pour that popped away quickly.

Smells pretty sweet. Like custard actually... interesting ...with a heap-load of nutmeg on top. It's sugary apples and soft cooked pumpkin. There's a hint of cinnamon spice in there too.

It's got a sensation that hits you right in the cheeks. That's the first gulp of a cider for ya. It's an extremely sweet cider compared to others I have tried. It's almost like jolly rancher candy, though not one exact flavor, but like a mix of apple and watermelon. I don't think there's any real pumpkin in here. It's not on the label at least, only "natural flavor" is mentioned. This doesn't taste like straight up apple cider though. The allspice that they put in here, though subtle, is a really nice addition. It could use some pumpkin spice though. Apart from being sweet and tasting pretty good, there's not really a lot going on here. There's hardly any aftertaste at all, as it fades very cleanly.

It leaves a sugary slick film around the teeth. Not really into this one. No ACE in the (pie) hole. that's for sure. This one could have used a hell of a lot more cinnamon, and hell, even some smokey clove. I bet this would pair well with a Djarum cigarette, at least giving it what it's missing.

Email ThisBlogThis!Share to TwitterShare to FacebookShare to Pinterest
What the... California Beer, Hard Cider, Pumpkin Beer

The Mrs. had a bottle of this and wasn't a fan either. I had a sip and found it way too sweet and artificial tasting as well. It doesn't compare to Doc's Draft or Naked Flock fall ciders. Good thing there was a bottle of Fireball around to make the Ace drinkable.