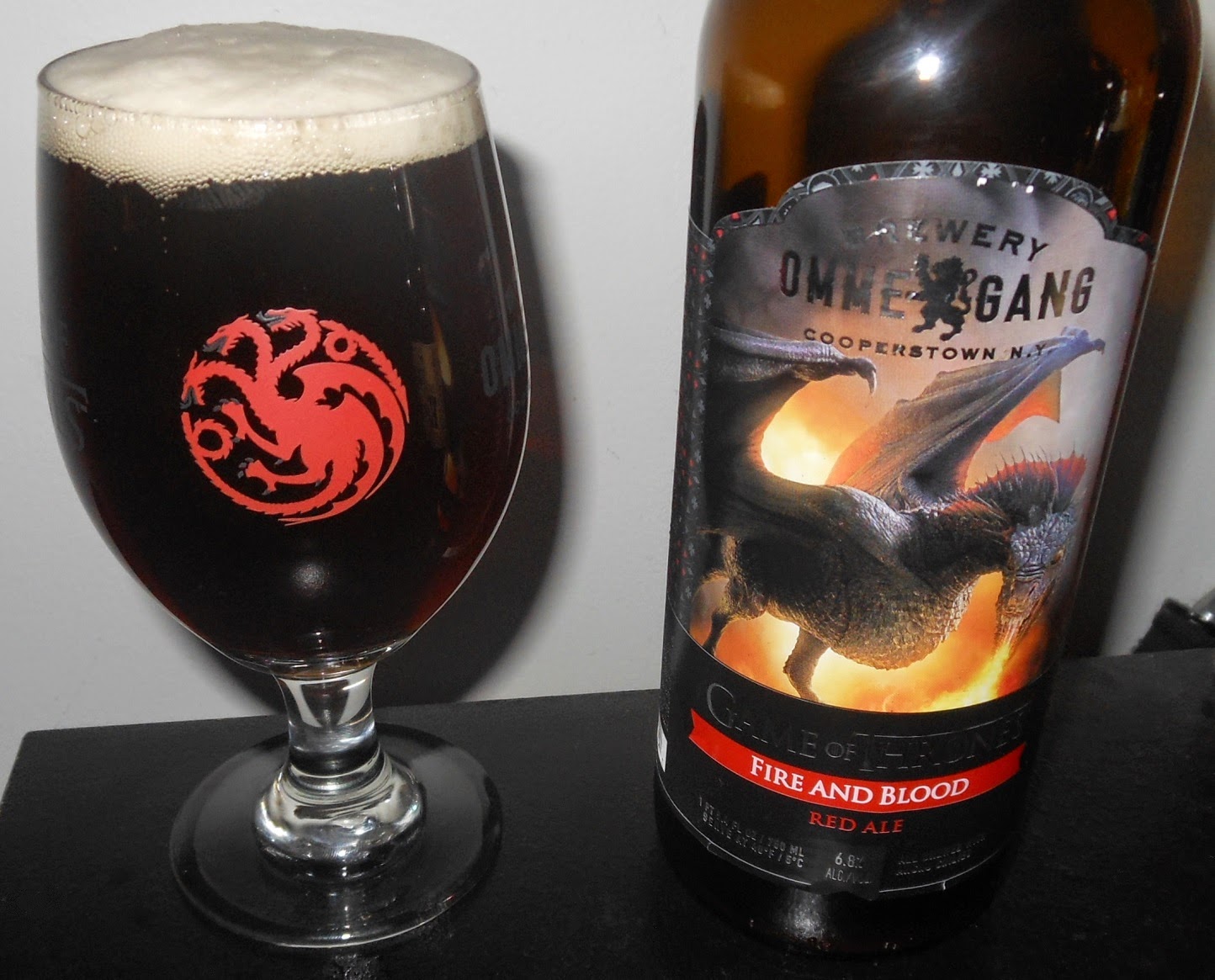 About: "Ommegang and HBO announce the newest beer in the Game of Thrones collaboration series. Through its first three seasons, the critically acclaimed drama has become the biggest show on HBO. Named after the motto of House Targaryen, Fire and Blood is inspired by Daenerys Targaryen and her three dragons, Drogon, Rhaegal and Viserion. To celebrate the rebirth of dragons, three different labels were created by the Game of Thrones visual effects specialists, each depicting one of Daenerys' feared dragons. Randomly distributed amongst the cases, each case will contain all three bottles.  Malt: Pilsner, Cara-60, Midnight Wheat, flaked rye and spelt / Hops: CTZ, Styrian Golding, German Tettnang / Spices: Ancho Chilies. Pair with pastrami, jerk chicken, pulled pork, Mexican cuisine (such as burritos), and sharp cheddar and pepper jack cheeses." 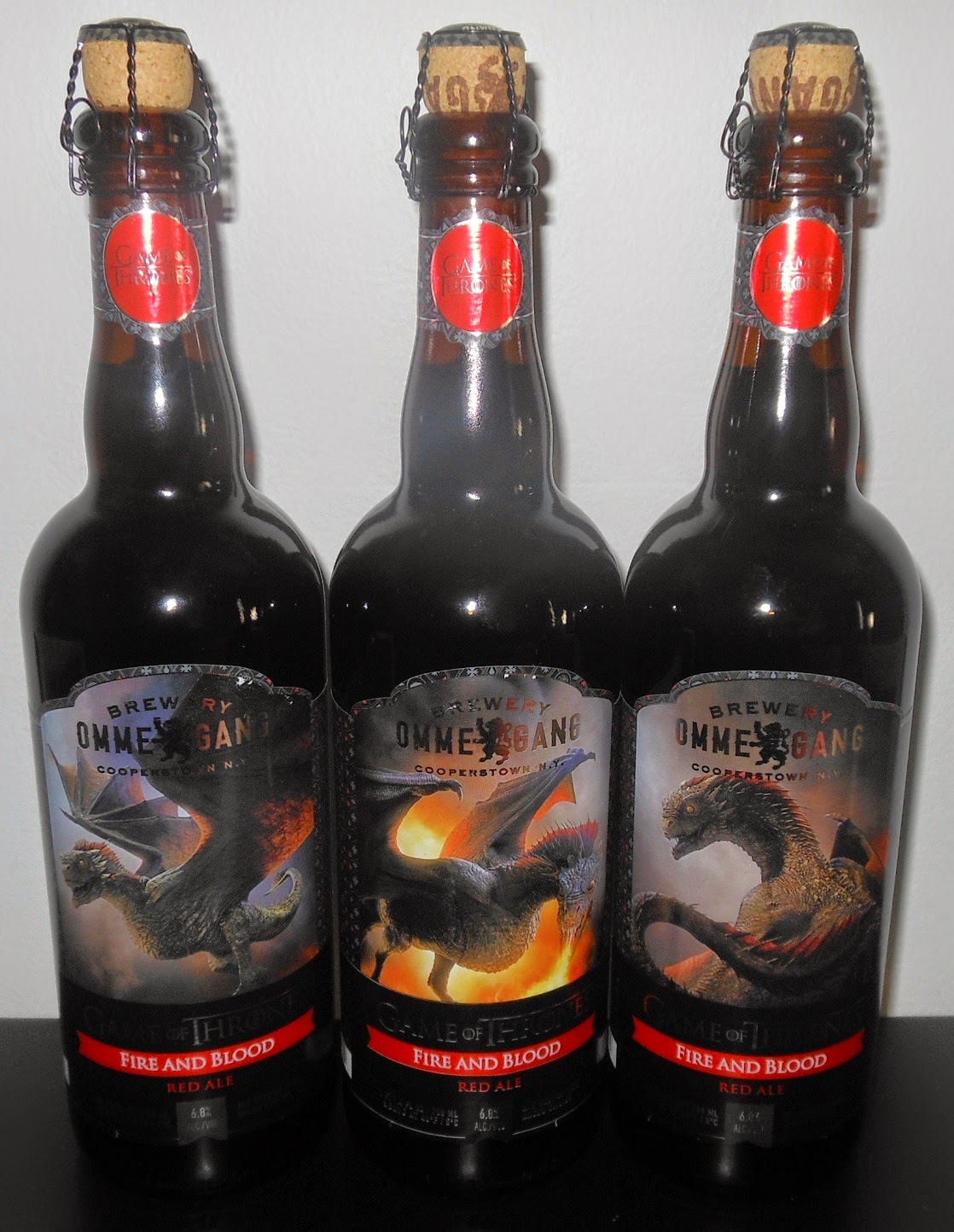 Thoughts: Just a quick note: the poured brew photo was from the last bottle I drank and the review was from the first so the visual description is a bit different. I took photos of all three pours but will probably only just post the fire breather for now.

Uncaged this fucker, took a firm grip and twisted that cork out, giving way to a lot of emerging silver smoke. Nice! Took a whiff from the bottle: very Belgian.

There's a ton of carbonation in this. A TON! My cup is half head. It's a deep red with shades of auburn and burnt orange. Aside from the semi-darkness and the black bubbles rising up at an alarming rate, the beer is actually pretty clear and see-through from a close enough point.

Strong Belgain yeast in the scent. Very herbal and floral. Am I getting ancho chilis in the scent, that is the question!? Perhaps. There's an essence of that chili here, a boiled down oily version of what once was. It is imparted into the beer, which is good. This makes for a totally insane smelling mixture here. It's quite profound. I would have probably disliked the smell of this beer years ago, now I ache for it.

First gulp and man, this is one strange beer. I bought three bottles and probably will buy a forth anyways, but it's definitely unique. The rye that kicks in is what probably got me. I just picked up the bottle and read the side of it, and there it is: rye. Damn there's some solid rye up in this son of a bitch let me tell you! This beer is all over the place actually. Starts off sweet and yeasty, then that rye builds up and kicks your fuckin' ass, then as it slowly - and The Rock MEANS SLOOOOOOWWWLLLYYY!!! - fades, a bit of bouncing dark fruits kick in and a medicinal nuttiness. It's a pretty fucking weird beer and kind of reminds me of a DFH ancient ale. I was hoping it would be spicy, but alas, it is not. It's got a very peppery spiciness to it and the essence of those peppers, but spicy hot, it is f'n not. Too bad. I wanted this shit to burn like fire and make my insides bleed.

I haven't been particularly impressed by any of the Game of Thrones beers, but you know what? I keep on fuckin' buying em man. They put three different labels out with three different dragons and I grabbed all three like a fiend. A fiend I tell you!!!1

Final thought: Could use a bit more fire and brimstone.

Email ThisBlogThis!Share to TwitterShare to FacebookShare to Pinterest
What the... Beer, Fantasy, Game of Thrones, Ommegang, Red Ale, Television

Wanted to drop a quick note to let you know that I've nominated you (and you've WON!) the Liebster Blog Award! You can find all the info you need to claim your nifty prize award over at my blog: http://www.midnightcinephile.com/2014/04/midnight-cinephiles-second-award.html where I did a whole nice acceptance speech and then nominated other worthy blogs!