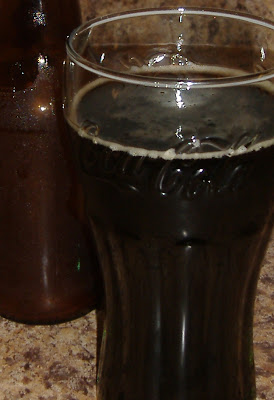 About: Movie fiend. Beer fiend. Fiend in general? General Fiend... All salute! Generally Fiendish in nature... but all around a cool 80's kid who knows what's worthwhile in life. What can I say about a guy as laid-back cool as Anthony, from the blog Eat-the-deaD? I can say that we've got a lot in common. We were both born in the same era. We both love pumpkin beer and Italian horror films (particularly the one's of Fulci and Argento, and of course Burial Ground[who doesn't love that flick?]... oh, and Jean Rollin too!). We're both necrophiliacs who love jello shots out of the ombligos of sticky stiff girls. And we're both completely in of our fuckin' minds!

Smells really good. Very natural and nothing off about it. It also seems pretty mellow. Cloves, nutmeg and cinnamon are all in harmony here. Nothing overpowering the other in terms of scent. Smells a little malty as well. Getting some allspice once it warms up, little bit of a Chinese five spices thing going on.

Well the taste is certainly more powerful than the smell. It seems to change flavors as you drink it. Along with the heavy clove and nutmeg, I'm getting a little black licorice and a faint taste of coffee. There's a slight smokey flavor and just a drop of sour mash in there. Cinnamon takes a back seat to the malt and very light hops.

Mouth feel is about a full medium with very minimal carbonation. It's a little filmy, like silk, and not as grainy as I usually like. It's a little watery, but it doesn't feel like water. I can't recall the carbonation, and that's the hardest thing I've had to think about with this one.

This is a brew along the lines of Post Road's Pumpkin, or a lighter version of Dogfish Head's Punkin. It's not a sweet brew at all, but it is spicy. Bitterness is pretty light and well evened out. It's a very good spiced beer, that isn't subtle at all. For me, it could use another pound of earthy pumpkin... and I wonder what it would have tasted like if Belgian Candi Sugar was incorporated. I say go all out next time and go Pumpkin Pie flavor all the way.

I'm not really good with Brown Ales. Don't know why, but out of the few that I've been trying lately, I've not had the best of experiences. For this one though, I'd like to thank Eat-the-deaD for giving me my very first taste of a home brewed beer. Hop-fully, someday, I'll be at your level! 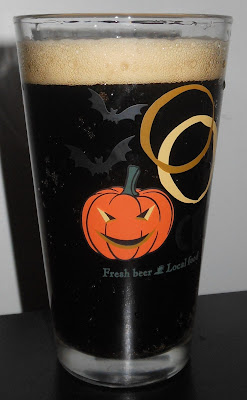 About: "The pumpkin is the same basic recipe as last year, but it's all grain this time. I cut down the chocolate malt and used more pumpkin. Also, I used a different yeast that's better suited for nut browns. It's from Yorkshire, some say it's Sam Smith's strain or close to it. I personally like this year's better, but would like to try dialing in the spices better next time around."

Second Thoughts: Poured a dense, foggy dark brown with a one finger bubbly light-tan head that popped away after about a minute. Looking at the top of the beer I notice a lot of small bubbles popping once they reach the surface.

The scent is definitely amped up from the last time. Tons of allspice in the initial smell when that cap popped off. Massive amounts. Chinese five spice blend comes through in a flood, nutmeg and cloves, a lot of licorice on the back of it. It starts to smell like a mischievous root beer after a few minutes of leaning in and out.

The frosty dark malt base slowly floods in and it's pretty heavy. Way in the background there's a prickly fruity note and something like a creamy sugar. A lot of tickling hazy spices roam around the tongue before slowly fading away and leaving a blast of black licorice, allspice and nutmeg. Ginger is hiding out in the background, as is the attributes from those hops that hit just right at the last second. This isn't a sweet beer at all, but there's a hint of it here. Not sour at all, but fairly bitter all around. It's very earthy, raw, a little grassy, with a heavy touch of smoke and what seems as if there would be a dry haze but it's not drying at all. A little bit of roastyness in the aftertaste.

Mouth feel is carbonated and puffy at first, and then afterwards leaves a silky like film all over the inside of your mouth and teeth.

A real big shoutout to Anthony, wherever he is. The dude is amazing and truthfully nobody has ever done something this cool, sending me beers these two times like this. I appreciate your work my fiend. Thank you.

Thanks for taking the time to review my beer and the kind words! I hope you enjoyed it. Overall I'm happy with how the spices came out, but I think we went a little overboard with chocolate malt. That's what gave it that little bit of coffee flavor and the extra dark brown color. I actually wanted more of an earthy pumpkin flavor, so we'll brew it again next year with less chocolate malt and double the pumpkin. I'm also going to bump up the rest of the malt bill to give it a bit more body and higher ABV.

Not sure what happened with the carbonation in your bottle. Sorry about that. I poured one last night that had a nice thick head, though most others looked like your picture. Carbonating home brews isn't quite an exact science.

It's funny that you mention candi sugar, because I was really tempted to add some. In the end though, we decided not to. We wanted a more traditional Northern English Nut Brown style with pumpkin and spice flavors. I'm playing around with the idea of a sweet, malty pumpkin pie spice beer too, which would get a healthy dose of brown sugar. We also plan on brewing an imperial pumpkin coffee stout too next year. But the question I find myself asking is, can one have too much pumpkin beer?

Sounds like a great fuckin' plan man! And no, there's not enough pumpkin brew in the world!