About: Malts: 2-Row Harrington, Metcalfe, Copeland pale malts and Paul's Caramalt / Hops: Nelson Sauvin Hops from New Zealand and Zeus Hops / Aged: in Toasted Oak. "Golden in color and wine-like, Griffin’s Bow is characterized by a surprisingly smooth balance of fruity notes, hop citrus, and warming strength. Flavors of honeysuckle and grapefruit are layered with toffee, vanilla, and the distinct character of toasted oak. A beautiful pairing for strong aged cheeses, Griffin’s Bow cuts through and contrasts the strong flavors of washed-rind cheeses with accompaniments of nuts, honey and dates to complement the beer’s inherent flavors." 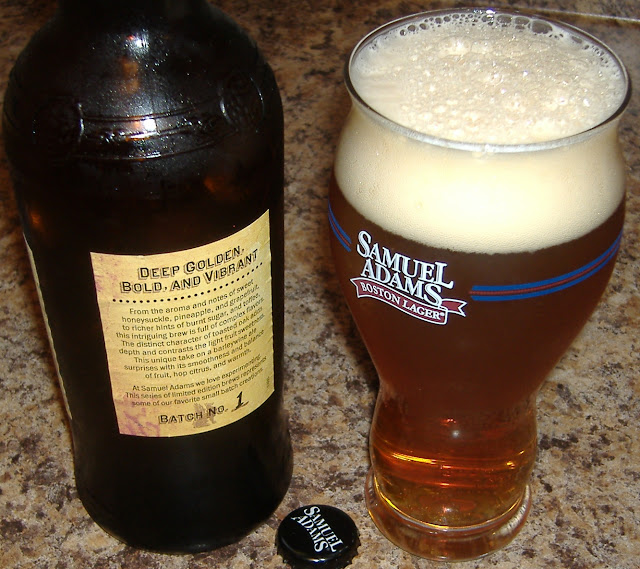 Thoughts: Poured an orange, hay-colored amber with a frothy white head of varying size bubbles that stayed in clumpy areas.. I've never seen a barleywine this light before, should I be skeptical?

Smells awesome and rare. Sugary grapefruit hit me first, it's not sour at all, and it smells extremely fresh. It's really strong too. As if I had just cut one open and it was right in front of me. Cool! Once the beer started to warm I got a bit more of a toffee scent, that evened out with the citrus. There was a light honey and pineapple aura around the second pour, but that was after I had already tasted it.

Wow! This is one neat tasting brew. Sweet caramel malt circling around that piney, grapefruit hop taste. Like a swirl of taste sensations. Once the fizz settles down, you get that brown sugar barley malt taste, with a backbone of what I must assume to be those New Zealand hops. I stopped a fourth of the way through to just let it linger in my mouth and that toasted, oak taste started to resonate. Absolutely wonderful and complex. I'm impressed. It's different.

It's slightly heavy, tingling, a bit fizzy and filling. I'm halfway through now and I am feelin' it! Aftertaste is a bit buttery.

Thus far the best Samuel Adams brew I've ever had. This was of course the first one I picked up out of the four in the series. I had to, it was the highest ABV and Oaked Barleywine. I actually didn't pick up on the Blonde part (aside from the yellow label) until I poured it. But it's cool. It's a really sweet and very slightly bitter beer. When I hit the stores these last two days I noticed that all of them were sold out. I guess I should have tried this sooner, as I may have just gone out and got another bottle saved it for a year (yeah right!).