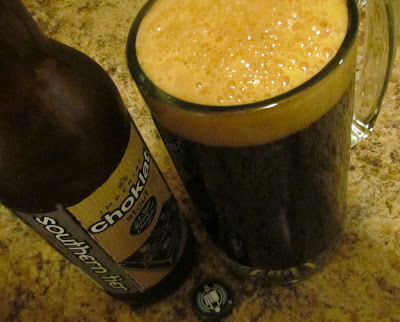 Choklat poured a very dark, dark brown with a chocolatey tan head. It was thick as all hell and not to be seen through.

Dude, this smells just like a hot chocolate or chocolate milk with marshmallows. So sweet! You can tell that it's got a kick to it too because halfway though the scent it's like a little warning flash is set off in your nostrils.

High alcohol vapor that hits you at the very first moment with a big slap to the mouth, but that initial hit dies down almost instantly and the tastes flow in. What that means to me, is I'm going to let this one warm up a bit because it's too cold. Loads of cocoa, and high quality bittersweet chocolate. Low hints of coffee aftertaste, and vanilla roast. The smell is better than the taste, as was with their Pumking. But that's not saying anything bad about the taste here, because this indeed tastes damn good. It's cold 'hot cocoa' with a strong side effect... that side effect being gettin' you warm real quick. Keep this one away from the kids. Unless they won't go to sleep that is.

Tingly at first, yet goes down silky smooth. It's smoother and easier once it warms, but this one is quite heavy.

A bit overwhelming actually. This is one powerful brew! There's nothing to stop you from drinking and enjoying the whole bottle, other than the risk of drowning in it. Southern Tier has made me a life long fan of their brews by simply drinking Choklat and Pumking so far. And the fact is, I'm not even much of a chocolate guy. Still, consider this beer Highly Recommended as a one nighter. It's a special occasion kind of treat, and unless you're an alcoholic chocolate fiend, not something you would want to drink too often.

Email ThisBlogThis!Share to TwitterShare to FacebookShare to Pinterest
What the... Beer, Imperial Stout, Southern Tier