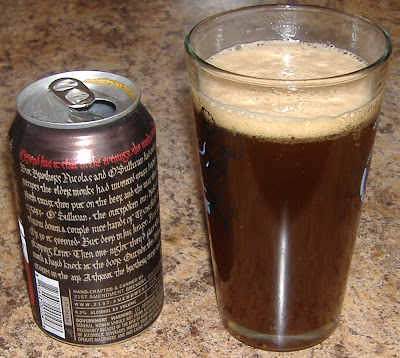 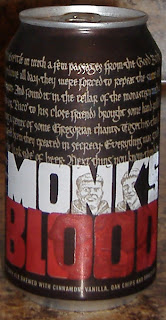 My Thoughts: Poured a dark, hazy reddish-brown with a half-inch tan head and some sediment floating throughout the brew that later settled to the bottom.

This stuff smells completely awesome. Everything mentioned is there: Cinnamon, sugar, vanilla, oak, dried figs. All of it. It smells so sweet. The spicy tones fill and tickle the inner nostrils.

Wow. This beer may just be climbing amongst the ranks of my, as of now uncompiled, top ten list. I don't know if it's the Belgian Candi Sugar or what, but Wachusett's Imperial Pumpkin had that in the mix and ended up being the best pumpkin ale that I've ever had. The bite on this ale is minimal, despite it being so strong. Cinnamon and Vanilla roll around a raisin and dark fruit flavor. Thankfully it taste's nothing like sour grapes or wine. Instead it just tastes damn good. It's robust in all of the right ways, in all of the right areas, and minimal where it matters like peppery or tangy. The strong alcohol, which does show itself randomly, sneaks in like a fog and fades away soon after.

It's got me licking my lips for more. It's a little bubbly, very minor fizzing and smooth... just like drinking blood. Fucking crazy! Just as I wrote that last line, Dracula by Iced Earth came on my playlist, into my earphones and tickling my brain. If this ale were transitioned into musical form, it would be this song! They compliment each other wonderfully.

It's woody afterwards when you breath in the air which rounds it out quite nicely. Seriously, this is one of the best tasting beers I've ever had. Don't be skeptical as I was at first (it's in a can with sediment after all), buy the four pack of this when you see it. It comes in a lovely box as well, which I as of yet do now own as I only purchased a single. Soon, though.