About: "Charlie Papazian and Fred Eckhart are the men who launched a thousand breweries. Their writing on the art of home brewing and steadfast promotion of beer culture helped propel the craft brewing movement. Charlie and Fred agreed to work with us on this special ale in honor of our 30th anniversary. This Imperial Helles Bock is a testament to the ever-evolving brewer’s art. Bold yet balanced with distinct toasted malt character, moderate sweetness and clean and floral hops." 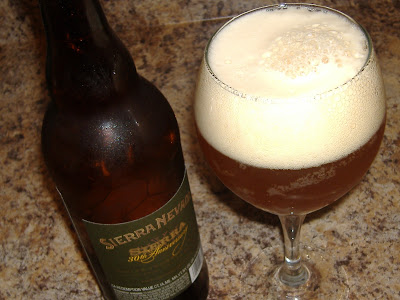 Thoughts: Well this one certainly poured lighter than the others. A golden straw-yellow color, almost a little bit orange once it's in the glass. Big foamy head as usual.

Smells citrusy. A little light, especially after the other 30'th brews there. Getting some lemon. Tangerine peel. Low creeping malt and hops.

It's got a zesty sting. Tastes a bit of floral hops. Sweet and bitter are both on the same level, with quite a well done balance overall. Somewhat tart. Not overwhelmingly tart mind you. But that's the main backdrop in flavor one it goes down. Doesn't really have the bite of an 8.3%.

A little fizzy, smooth and very easy to drink. Not terribly exciting unfortunately though.

Overall a very, very mild Imperial. The lightest I've ever tasted so far actually. For all that it's worth though, it still does taste damn good. And the warmer it gets, the sweeter is gets.

About: "First of the series. Fritz Maytag, owner of San Francisco’s Anchor Brewing Company, is regarded as the founding father of the craft brewing movement. Frtiz agreed to guest brew this very special ale with us in honor of our 30th anniversary. As a nod to the dark ales and stouts that seduced both Fritz and Ken in the early years, we bring you this pioneering stout, a rich and roasted ale, perfect for aging, and worthy of your finest snifter." 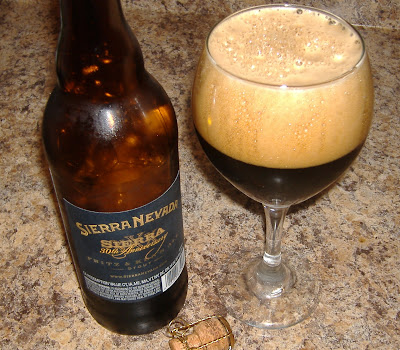 Thoughts: Poured a midnight pitch black, with a dark chocolaty head that appeared to lighten into a soft fluffy whipped topping.

Heavy on the chocolate and coffee. It's not leaning towards one or the other. Both seem to be represented quite well.

Bitterness, alcohol tinge, major coffee... gonna let it warm a bit. Very malty, strong and runs through the sinuses. The alcohol notes are pretty strong in this one. It's not affecting the mouth feel, but rather the taste a bit. It's definitely more coffee than chocolate, in fact, the chocolate seems to all but disappear after a while. Only a peppery cocoa lingers. It's still there if you stop and search for it, but tangy coffee alcohol pretty much sums this one up. I'm getting some earthy tones on the finish too. Bitter, grassy and a little bit smokey.

It's a little bit thick, but yet again, just like the rest it goes down smooth. Not really a sipping brew though as it's a bit filmy, your best bet would be to chug this fucker down and run for the hills.

This one is a little bit more funky than all the rest. A lot of smoke aftertaste. A lot of smoke period. It's kind of like drinking a few shots of coffee brandy after eating some Chocolate Rice Crispies while standing over a bonfire and breathing in some of the embers. Yeah, kinda like that.

Wow, you went Sierra crazy! I tried this one over the summer. Really great stuff. Very light, sweet and drinkable for a strong beer.