About: "What’s in a name? Sometimes the simplest can be the most descriptive, and in this case, derisive and divisive! After much internal debate (ad nauseum! Bourb[KY]n, anyone?), we decided a single letter change was the best way to embody the bourbon barrel-aging that adds layers of complexity to an already exquisitely spiced pumpkin porter." 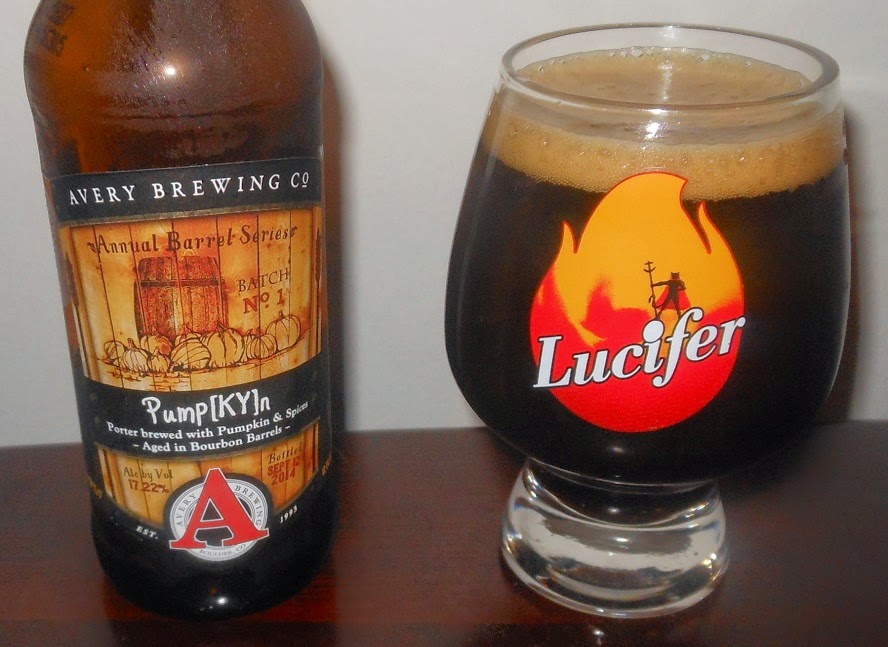 Thoughts: Last night while watching Hell in a Cell, I drank a 2014 bottle of Avery Rumpkin (original review HERE) and I'll tell ya, the shit was absolutely glorious! Even better than I remember from the last two years. But this one's about Rumpkin's brand new sister beer! I almost didn't even buy this beer because I thought it was Rumpkin on the shelf. It was right next to it and the area was a bit cluttered since many people must have picked up the bottles and set them back down after considering the price. Plus, I didn't know that this even existed since it's been about a year since I payed attention to any real beer news. When I noticed it on the shelf, I just said fuck it and bought both their pumpkin brews because that's what a guy like me would do.

Pump[KY]n porter poured a dense black with a soft light-brownish tan head on top. A little smoke came out when I cracked it, but other than that there's not really much to describe. The smell is on par with other Avery works of art and by that I mean that this beer is obviously a masterpiece. Having the Rumpkin last night I will say that I do enjoy the scent on that one a bit more, but that's only because I'm more partial to ales than porters. This one is super rich, like an alcoholic chocolate cake... there's tons of barley malt here and it's so strong you could drown in it. There's also some cinnamon and spices on top of oatmeal. It's absolutely fucking beautiful! Oh, and it smells dangerous as a motherfucker too.

It's still a bit cold, even though I've had it sitting for 45 minutes without touching it. How do I do that you ask? I don't know, but I think I may like torturing myself. Let's try it! Yes. First gulp and IT BURNS! IT BURNS!!1 Avery you sadistic bastards, you've done it again. Yeah, there's a ton of heat on this... but it's sweet, spicy and just ripping with barley. This one really reminds me of Dogfish Head's World Wide Stout which is brewed with a shit-ton of malted barley as well. Oh, on a side note I should probably tell you that yesterday I aslo drank a 2014 DFH WWS earlier the last evening (the Rumpkin was my nightcap) so yeah I'm going a bit nuts with these high ABV brews but that's what I like to do.

The Bourbon barrel aging on this is off the fuckin' chain though. It's got a strong presence that hits the hardest after the swallow, leaving a fiery haze down the gullet and igniting your fuckin' ass, man! While in the mouth however, you get all of those pumpkin spices and that sweet oatmeal. This is the definition of a sipper beer. It's the real deal, and this one and Rumpkin are two pumpkin beers in which all others should be judged. Just looking to my right at these two empty bottles I've gotta say, that I feel blessed! No joke. I know these beers are about $15 each, or could be 10-18$ depending on where you are, but it's totally worth it because Pump[KY]n and Rumpkin are not just beers but experiences.

Despite how enjoyable this beer is fresh, I would definitely suggest aging it a bit since it is extremely hot. That, and the sweetness is a bit much. If I ever pick up another bottle, it's going in the back of the fridge for a year or two.