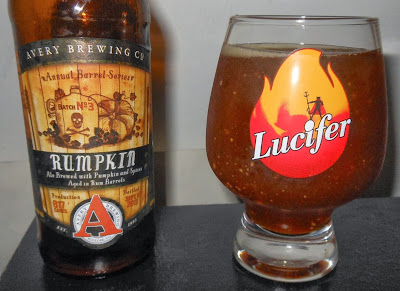 About: "We wondered what would happen if a monstrous pumpkin ale, plump full of spicy gourdiness, were aged in extremely fresh Gosling's Rum barrels to add suggestions of delicate oak and candied molasses. Rumpkin is what happened! This first member of the Annual Barrel-Aged Series was brewed with roasted pumpkins from a local Boulder County farm, and spiced with nutmeg, cinnamon, and ginger. Barrel Type and Time: Dark Rum Barrels, 6 months / Malt Variety: Aromatic, Honey Malt… and Pumpkins!"

Thoughts: Rumpkin poured a thick, murky, dark burnt orange color with medium carbonation (very unexpected) and a head that dissipated during the pour itself.

The scent on this monstrocity is heavy, dangerous and pretty damn good. Up front it's strong booze and rum. Once you get past that barrel aging though, the strong ale starts to come through. It's mildly sweet and the spices are blending well. There's a mix of dark fruit notes here, but the longer you take it in, it mellows out to an earthy mild pumpkin puree.

First gulp, here we go. It starts off with a strong haze of rum, a blast of booze, it's instantly warming and wow... its a "dooozy". After the swallow, the blending of tastes start to really come through. As I breath in I'm getting the wood from those barrels. It's pretty cool. This beer starts off very spicy, and not only is it spicy, but it's hot! I'm getting tons of burnt sugar, brown sugar, molasses, figs and raisin. After the swallow the spices hit hard and heavy with a single peppery cinnamon explosion, then the strong ale comes through and slowly rides out, exposing flavors of nutmeg and ginger. Caramel comes in strong about halfway in, once the tongue adjusts to the strength. It's got a sort of cold pumpkin pie slice with french vanilla ice cream on top drizzled in steaming hot caramel type vibe. Slight hints of cocoa and cinnamon rolls.

This beer is pretty light on the tongue. It's silky and very coating, but not too heavy.

Aside from being a great pumpkin beer, this is a great beer in general. While I absolutely love the strength in this one, and while the flavor is superb, this one doesn't raise above the ranks of Pumking for me. They are two totally different beers mind you, and I'd grab a bottle of each no matter what... but as far as Pumpkin Beer goes, nothin' beats the King.

Rumpkin sounds amazing. Unfortunately we don't get Avery beers out here. We did however get a keg of J.W. Lees Harvest Ale aged in Lagavulin barrels (http://beeradvocate.com/beer/profile/178/25061). It's an English Barleywine, which is very different for American "Harvest" ales. Very malty sweet brown sugar and rich caramel flavors mixed with smokey peat goodness that adds a hint of an Autumn bonfire of burning leaves. I imagine this beer tastes like an ancient Pagan Samhain ritual. My guess is that it's too strong for some reviewers, hence the low rating on Beer Advocate. But it's a hell of a beer that I think you'd enjoy if you ever come across it.