About: "Bolt Cutter is a cellarable 15% ABV barley wine brewed in celebration of our 15th anniversary. Dry-hopped with a mountain of Cascade hops, it’s balanced by a malty sweetness and spicy complexity, resulting from barrel aging some of it in bourbon barrels, some in maple syrup-bourbon barrels and some not at all (standard fermentation only). We allowed the beer to mature in bottles and kegs for four months so that it would be perfect for its release in November 2012. Bolt Cutter pours a deep copper color and is best sampled at different temperatures to allow the flavors to unfold." 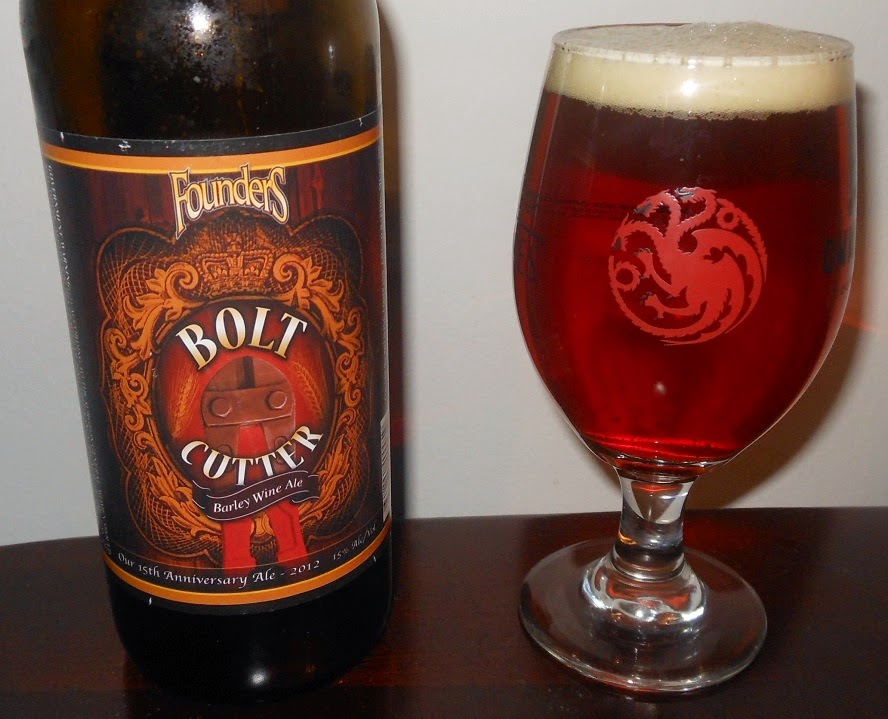 Thoughts: I bought this beer two years ago and it's been in the back of my fridge inside of a closed paper bag ever since. Why? I do not know the answer to that question. I just figured I'd save it for the "right time" or a "special occasion", but there never really was one of those things that ever made me think now is the time. When I decided to buy a Bolt Cutter glass online to pair the shot with they had just sold out, so I guess I felt kind of bummed. Well, that bullshit is over. Last night was Halloween, I got a full weekend to do nothing but jerk off so let's fuckin' do this!

This beer is way clearer than I thought it would be. I'm talking a crystal clear burnt orange with shades of ruby red, and it looks pretty nice. It's so clear that I can read the lettering through it on the back of the glass in this dim room. The off-white head was gloppy and slow to form before dying down into a puddle of mush. I can smell this one from across the table. Just the way I like it. There's only three things I like to be able to smell from across the table: my food, my beer... and my women! The smell is of strong, sweet malted barley and the alcohol is strong with this one. It's got a syrupy burst of toffee that's candy-like and indulgent. Despite the strength on this, it doesn't appear to be hiding a kick.

First sip and it's all there, and with an effervescent surprise on the mouth feel on top of it all. It's absurdly smooth, with a tingling that roars throughout the whole thing, but still, so soothing and soft. How does it stay so smooth?! Is it the two years that have gone by? I got a shiver inducing bite a few seconds after that first sip, but it's settled already by the second. With the third and fourth sip I feel a fire igniting in my stomach. I of course wouldn't put it past Founders to have this barleywine loaded with hops (not much unlike SN Bigfoot) and man are those grassy as all fuck hops bouncing around here. Sometimes after a while, that kind of thing builds up and grimes up a beer, but that's not the case here as it sits back just like a gentle leafy, grassy breeze in the background. It's not strong enough to be distracting, but it's just there enough give a little needed depth... because overall, I'm not getting too much depth here. It's layered, but slightly repetitive.

It tastes like a really smooth hard liquor barleywine hybrid. For the most part it's sweet, especially when you swirl it around in the mouth. After the swallow it's got a very low lever bitterness, but it's there and adds a little complexity to the drink. It's slightly softer than I usually like, most likely due to the aging, but it's still peppery and has a nice zing to it. For being so mellow, it's still damn tasty! This is some exquisite shit here as a matter of fact. Now, I'm of course a little experienced with these High ABV beers. Just the other day I drank a World Wide Stout, Rumpkin, and a Pump[KY]n, in addition to the many others I've tried, this is by far the softest. But that doesn't mean that other people would find this soft at all. Oh hell no! Actually I'm pretty sure that if you gave this to someone who didn't know what the fuck it was they'd think it's straight up booze and not a beer at all.

But that's a good thing, especially about this beer for a guy like me. A freak! No, a guy like me, who enjoys the finer things in life. I just read the info on this beer while preparing to post this review, and while it's obvious that there's some sort of barrel aging it's not on the bottle I don't think. It makes sense now how they did it, what with the syrup I got, then the bourbon and even at times where it didn't really seem as if it were barrel aged at all. So the mix of all three of those things are indeed evident in the taste here. Even then however, I'll admit that this one isn't perfect. Not that it needs to be. In fact, I like it just the way it is, because if were different, well, it'd be something different. And I didn't want to drink something different, I wanted to drink this. And perhaps I'm rambling a bit, but although it's not as good as I was hoping (waiting on it two years and wondering doesn't help that, btw) I still enjoyed the hell out of this one and if given the chance, I'd buy it all over again.

Nice women of metal page you got there.